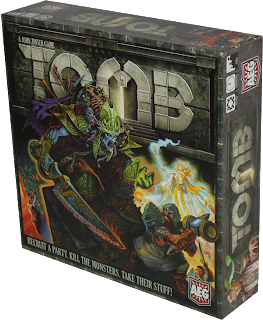 I don't run across a whole lot of dungeon crawl games I don't like. Even really bad dungeon crawl games usually appeal to me on some level, because I'm a fan of the theme. So for me to play a dungeon crawl game that a lot of people like, and then come back not liking it, seems like there's something a little bit wrong. I don't know if it's me or the game, though I'm pretty sure my friends who like Tomb will tell me it's all me. But I say it's the game.

Here's the concept - you start at the inn, recruit adventurers, and then send them into the tomb to raid crypts and score treasures. You get the XP, not the grunts, because you're apparently a Bear Stearns CEO and profit mostly by the work of other people and produce next to nothing yourself. This is especially unfair because those adventurers get the piss knocked out of them every time they show up anywhere, between traps that cut off their legs to monsters who eat their eyeballs with brie and dry crackers. That tomb is a ridiculously deadly place to hang out, and it's only made worse by the other players.

You can't actually attack the other adventuring parties (usually), but you can rob them blind, which is painfully irritating when they steal the one magic item that was keeping you from getting your ass kicked by Zed the Redneck Manlover in the next crypt. And that rule about attacking the other parties? That goes away whenever a card says it does. And that happens a lot.

The actual game moves pretty quickly. On a turn, you can move, check out a crypt, recruit some help, or equip your guys. Since some other asshole is going to steal all your crap anyway, gearing up seems a little pointless, but spells can sure come in handy later. The only lengthy part of the game is the actual crypt exploration, where one of your friends picks up the cards that describe the contents of the death trap and describe to you exactly how painful the next beating will be. Then you roll a bunch of colored dice to see if your adventurers can avoid having their testicles used as monster hacky sacks. Usually, they don't.

Now, if every player on the board was having the same trouble at the same time, this would be different. But all it takes is a couple crappy card pulls and you're up a creek, watching your whole party get completely destroyed then eaten then crapped out and set on fire. Now you get to go back to the inn and see if there's anyone left (and there probably is not, unless you count the crappy characters that nobody recruits because their main talent is being hit and falling down). Meanwhile, some other jackass has hoarded all the good adventurers and is in the process of waltzing through crypt after crypt, disarming traps, killing monsters and carrying so much treasure that he has to put it in the bank because nobody has any more room for it.

I think the reason that I get angry every time I play Tomb is because so many of the cards have some arbitrary middle-finger-of-death that takes you from competitive to completely ruined in one bad die roll. In one game, I had a great magic item that was keeping me in the running, and another player had some assassins dagger that said something like, 'no matter how tough the other guy is, and no matter how well he's rolling, go ahead and kill him and take all his crap.' And another time, I pull up the trap card and it says, 'if you didn't roll like Jesus was blowing on your dice, everybody in your entire party dies and you get to go back to the inn and stare at the walls because every single potential recruit is deader than disco.'

And that's my real beef with Tomb. It's not that it's not fun, because it is. It's rough and tough and full of raw beat-down action. There are fights and traps and great treasures and exploration and everything I love about dungeon crawl games. But then, just because the designers wanted to make me punch a puppy in the mouth, there are these 'eff you' cards that completely and arbitrarily ruin your entire day. It's not even fair, and there's seldom much you can do to avoid going from romping to ruined inside five seconds.

If you have a longer fuse than I do, and you like dungeon crawl games, you would probably really like Tomb. The art is great. The game play is compelling and exciting. If you're OK with the fact that the other guys at the table are going to kick you in the jimmy and steal your wallet, and you're completely cool with doing it back to them, then you'll probably get a big kick out of this game. But if you don't like having the rug yanked out from under you, or if you don't like twists of fate that you can't control, you'll probably wish you had played something else. Like, I don't know, Parcheesi or something.

Cons:
Doesn't even try to be fair
Sometimes the game itself just feels mean spirited

Dogstar Games has Tomb. If you would like to be kicked in the man junk at random moments while exploring a cool dungeon, you can run right over there and get it:
http://www.dogstargames.com/product/AEG5001
Posted by Matt Drake at 4:59 PM

I have a friend who loves the theme, was excited to get this game, but hated it for all the reasons you stated. He couldn't even sell it to anyone he talked it down so much.

I laughed nicely at this review - excellent stuff, and that's even with me really liking the game.

I think that might be because I usually don't focus on the monsters and instead enjoy just messing with my competition.

I apologize for being a groin shot specialist, but don't plan on stopping when it comes to this game. :-)

I didn't like the game much myself, especially with those dice that even a non-colorblind person has difficulty telling apart, and I'm the colorblind one.

I love Tomb for all those reasons. It's the anti-Runebound with all the potential...well...Stabbity Death. I was playing with a certain Denton cop, Phoenix Programmer, and Garland Project Manager once, and watching the cop gut the Project Manager with one of the few items that allows killing another's party member...that was EPIC.

I agree on the dice, though, apparently the French have a keen sense of sight and color differentiation...especially at night. We keep all 3 colors in different cups for this very reason. I'm actually considering painting the pips a different color like yellow or something so you can tell the difference between green and blue.

As usual, Matt, an entertaining and enlightening review.

I loved to hate this game when I first played it. I loved that it was like the old TSR Dungeon, but on MethRoids. I hated that it seemed to get the better of me every time. I'd walk away angry.

After 6-10 plays, I started cluing in that when a card gave you an option to off one of your party or beat the trap, that dude suddenly wore a red shirt on the wrong fricking day.

I love this game. I really think you need to play it more, a lot more. I'd be happy to school you. :P

I agree with Pete and ninth, this game rocks. It does have a few bad cards, and I have heard of people "trimming the fat" so to speak and remove some cards. But overall, it is a great game made even better with the expansion.

I wouldn't hold your breath for that retraction, Enrique. I did say the game was fun, but it makes me angry every time I play, so I probably won't be investing a lot more time in it. And I sincerely doubt I'll be missing it if I don't play it more.

Well, at least trey the expansion sometime soon. I've heard it does a great job.

When I played it I was upset when I kept trying to keep my guys alive, but once I realized the nature of it was that chaos and constant recycling of items and characters, I actually had a ton of fun.

But I can understand why it woud be frustrating, it's understandable.