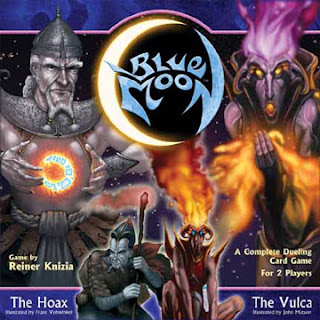 While I have a group of good friends I meet for games just about every weekend, I end up playing more games with my wife than anyone else. This might have something to do with the fact that we both live in the same house, and it might just be that my wife is totally kick-ass and, on top of being one of the finest chefs you can imagine, also loves to play games with me. But either way, it means I'm always scouting good two-player games. And when we find one that we can enjoy with two players, we play the hell out of it.

I was surprised to find that Blue Moon was one of those 'play all the time' games. For one thing, it's from Reiner Knizia, and I have about a 50% success rate with Reiner games. Some of his games are pure genius, and some are so boring that I would rather clean the cat box. On top of the Reiner thing, it's also got a rather bizarre theme, being set in a trippy fantasy world where fire people do battle with old men and naked girls in body paint. And if those weren't already two strikes down (not that the naked girls are a strike, there just aren't enough of them), there's a weird capture-the-dragon thing working that can lead to some near-instant ass-kickings.

Blue Moon is a card game. It's expandable, which means you can get more decks for it, but you can also play it right out of the box, as long as you like setting the Vulca against the Hoax (that would be the flame dudes and the octogenarians I mentioned before). Each deck has 30 cards, split between leadership cards, characters, support and boosters. Some tricky rules tell you when you can play each kind of card, but the basic concept of the game is that you use the cards in your hand to compete in battles where you constantly try to one-up each other for the high score in either fire or earth, with the winner attracting a dragon (told you this was a wacky theme).

Character cards are the driving force for the battles in Blue Moon. Each has scores in both earth and fire, though sometimes those values might be '0', in which case they're really not much use in a fight. If your opponent hits you with four flame, you have to come back with at least four flame, or you retreat and he swipes a dragon off the middle of the table. These characters are all colorful and often a little silly. Like the old men are mostly gray-haired, tubby academics. They kind of remind me of Jack Nicholson when he thinks he's still a viable sexual candidate and does a scene without his shirt on. Only since it's just a card game, it's less disturbing.

And that's just for starters. Add in the crazy icons that let you break the rules even more, and now you're starting to see some pretty wicked card play. Battle getting a little too rough? Drop out the guy with the shield and the '2' and bring it back down a notch. Want that extra boost without losing all your cards? Play the booster with the retrieve icon, and take the card back into your hand. But be careful - if your opponent bails before you get a chance to pick it back up, you lose the card (though you do win the battle, so it might be worth the sacrifice). And to just completely twist your head around, many of the cards have special powers that break all kinds of rules. It's madness. Cats and dogs, living together - mass hysteria.

It's not really that crazy, honestly. It all goes together smoothly into a clean, quick, clever game that is easy to pick up and play. But since knowing how to play a deck depends largely on knowing what other cards you can count on seeing, both from your deck and your opponent's, experience is the best teacher. Knowing the cards provides an immeasurable advantage, and so there's a bit of a barrier here for new players. Study up and learn your deck, and you'll have a better idea how to play it. The different decks have drastically different play styles, and so you have to know your own cards and what the other guy might break out. You may want to keep a card ready so you can counter those one or two cards that always seem to catch you with your pants down, or you may want to be overly aggressive even if it means you're weak towards the end of the game.

One complaint that might plague the novice player is that the game can end pretty suddenly if you're not careful. It's supposed to go until someone runs out of cards, but if one player can bogart all three dragons and then capture one more, it's over early. And since it's not all that rare to score three dragons in one fight (using some horrifying card combinations in a long fight), it can be very discouraging. It's just no fun when you play one fight and then the game is over. And sometimes you just can't get the cards you need, and while there are ways to get to what you need, the new player isn't going to know when to do that.

If you're just playing with the base set, the only way to play is to use the preconstructed decks. That's fine, because they're balanced enough. They can be tough to learn, though, and after a while, it can get pretty boring to be playing the same thing over and over. It's like a really good pizza - awesome, but after a while, you just want some decent Indian food. So if you buy some expansion decks, you can either play them the way they come, or you can build your own. There's enough meat on the expansion decks to warrant their own review, so I'll write another review later. It's not worth buying the expansions until you decide if you like the base game anyway, so there's no rush.

If you're a total theme hog, Blue Moon will seem too much like dropping acid. It's very odd, and there's very little connection between the pictures on the cards and the effect they provide. And if you like your card games to be intense, lengthy duels of luck, will and wit, Blue Moon is going to bore you to the point that you wish you were dropping acid. However, if you like to play short, intelligent games that require quick decisions, or if you like games where experience allows shrewd play, or if you just like card games with really pretty art, Blue Moon should be high on your list.

Pros:
Very pretty card art
Tricky card effects require quick thinking
The more you play, the better it gets
So interesting, it doesn't even feel like a Reiner Knizia game at all

Sadly, Dogstar Games does not have Blue Moon. They have a listing for it, but considering how long this game has been out of print, it's no shocker that they can't keep it in stock. However, there are probably other online retailers who do have it, so you could look them up, if you feel like it.
Posted by Matt Drake at 8:18 PM

Blue Moon is OK, but there are way too many rules ambiguities. Try the excellent AI before you buy.