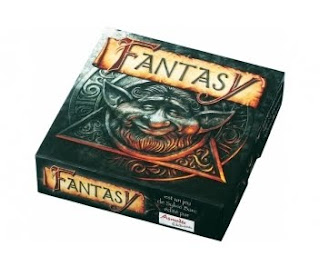 While discussing our latest game with my wife, I came to the conclusion that Fantasy (a new card game from Asmodee) is the Kim Kardashian of card games. Really pretty, but completely worthless. Interestingly enough, Kim Kardashian is also something of a fantasy for men who like empty-headed females with big boobs.

Fantasy is a card game in which you take turns playing various fantastical creatures, like goblins and hobgoblins and elves and fairies and stuff. Each card had a power on it, like the goblin that lets you steal two cards from an opponent or the fairy that stops other players from using the powers on their cards. At the end of the game, the player with the greatest number of critters on the table wins.

The problem is, Fantasy is more random than playing 52 Pick-Up, because the powers on the cards are complete game reversals. Like the imp, that swaps all the cards in your hand with someone else, so that you can't ever build up a good closing hand because all of a sudden you don't own your own cards any more. Or the hobgoblin, that swaps all your scoring cards so that you go from getting your ass kicked to drinking champagne with one of America's most useless rich girls. It's impossible to plan ahead, build a hand, work out a strategy or make clever plays. You can scheme and swap the whole game, but in the end, the player who drops the last card is probably going to win. And if he doesn't, he probably ties.

I can't understand how a game this vapid gets published by one of the biggest game companies in the world. Doesn't someone go, 'you know, this game is freaking stupid,' and shut it down? It's not like you could think, 'hmm, there might be something here, let's push it through production.' One play should be enough for any gaming executive to realize that the Fantasy is not the game, the Fantasy is believing anyone would want to play this often enough to buy a copy. Of course, I also don't completely understand how Kim Kardashian builds a media juggernaut based mostly on looking good in a bikini. I've seen her show. She's dumber than a box of used brake pads.

The art is really nice, though. As a portable art gallery, Fantasy would be a huge success. If they had just put different art on 50 cards, and it all looked this good, Asmodee could have just sold it as an art collection, because it's that pretty. I guess that's how Kim Kardashian sells calendars. She is fairly attractive. Of course, she also has a tendency to go to photoshoots without her pants on. That probably helps.

Some games I've played with my family wind up irritating me but entertaining everyone else. Fantasy is not one of those games. For once, everyone at the table was equally confused by the idea that a major game publisher could think Fantasy was a viable piece of interactive entertainment.

What's ironic is that with a little restraint and a lot of playtesting, Fantasy probably could have been really cool. Like if the goblin stole one card, and the imp let you trade one card you choose for two random cards from an opponent. The dryad that lets you steal from an opponent's score pile is cool, but the hobgoblin that takes the whole damned thing is just too much. Tone down the wild swings a little, and Fantasy could be really fun. By the same token, get Kim Kardashian a college degree and a modicum of class, and she might be interesting, too. She would still have that killer rack, so it's not like getting smarter would make her less appealing. Though it would probably result in fewer naked pictures.

I prefer my games to be interesting, and I prefer women who have some value to society as a whole. So I heartily dislike both Fantasy and Kim Kardashian, neither of which is worth a puddle of warm spit.

I emphatically do not want you to buy this game. So instead, here's a hilarious picture of Kim Kardashian.
http://cdn.buzznet.com/media-cdn/jj1/headlines/2009/04/kim-kardashian-sunburned.jpg
Posted by Matt Drake at 9:25 PM

That was one of your better reviews in recent history. LOL

That was the best link you have ever provided

I bought the game yesterday and after playing a few minutes minutes had the same frustration. I didn't even finished the game...

I'll test again these days with these rules.