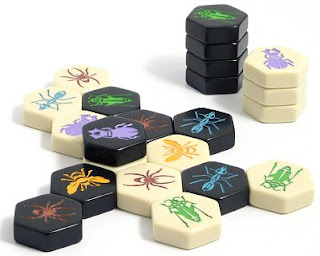 I think we've hit the board game equivalent of peak oil when it comes to theme. We've got so many games about farming that they're starting to make up a substantial portion of the German gross national product. We have games about selling silk, parking cars, and even one about shipping containers. But you can tell we're running low on ideas when we take a pure abstract and slap a theme on it where spiders and ants try to surround a bee.

In fact, the theme for Hive is so interchangeable that I've seen versions that use everything from Space Invaders to Pokemon, with lots of other weird variations. People make their own Hive sets, and I've even seen one custom set made with chess imagery.

The chess thing is especially apropos because Hive has a lot in common with chess. There's a lot of planning moves, setting up plays three moves out, smart opening moves, traps for the unwary opponent, and other elements that make chess the kind of game where very boring people who have very little sex write books about how to spend an inordinate amount of time talking about a game, and not that much actually playing. Hive is not quite as popular as chess, but for a very small game, this puppy has a ton of fans.

It's pretty clear to see what hooks all those fans. Hive is an incredibly strategic game with the kinds of simple rules you find in chess, and an astounding amount of depth. It's the epitome of strategy games, with every move being vitally important and every mistake costing you dearly. Every piece moves differently (you know, like in chess) and a very short set of rules explains everything you need to know.

The different moves define Hive. Every hexagonal playing piece has different rules for moving. Ants can run like the wind, but can't fit into tight spaces. Grasshoppers just launch themselves over the tops of everyone else and land wherever they wind up. Beetles, spiders and even the queen bee all move differently, and since the goal is to get your opponent's queen surrounded, understanding how to exploit those moves is critical to success.

For instance, since you can't split the Hive, moving a piece onto the outside of an opponent's ant locks down that ant until you move your own piece. If your opponent's grasshopper is interfering with your ability to bring in your pieces, you can hop on top of it with your beetle. I prefer not to know why the beetle is mounting the grasshopper, but at least I can bring out my bugs. Let's just hope that beetle is using protection, or there might be little baby beetlehoppers running all over the place.

I've played more than a half dozen games of Hive at this point, and I'm just barely scratching the surface of how to play. I understand the rules, and know how everything moves, but I discover more strategy and flexible tactics every time I play. I love it, and would love the opportunity to teach it to more people and learn a lot more as I play.

On the other hand, half of the people I've played would prefer to scrub grout than play Hive, and frankly, I understand entirely. Hive is very much an abstract, and it's one where the best player wins - there is literally no luck in the game, but there is remarkable strategic and tactical decision-making. If you would rather play Talisman than chess, Hive is going to appeal to you almost as well as an actual nest of insects you found in your attic. It's faster than chess, but still contains an impressive amount of difficult decisions and abstract maneuvers.

If you like chess, you'll probably like Hive. If you think chess blows donkeys, you'll probably hate Hive. And if you like a good story behind your games, then you're really out of luck. Maybe the best thing to make Hive more popular would be for the game's designer to pretend he's German, and to replace all the bugs with stuff about farming.

Cons:
Ants and grasshoppers surround a bee - that's not a theme, it's a Disney Movie
Pure abstract - if you like theme, you'll hate this game

Dogstar Games doesn't have Hive, but if you check Thoughthammer or FunAgain, they can probably help you out.
Posted by Matt Drake at 7:08 PM