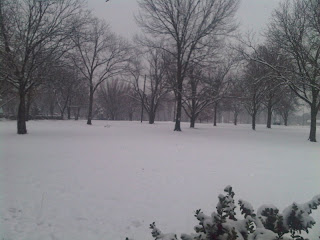 North Texas gets snow about twice a year, and it's usually for about fifteen minutes, and normally it melts into slushy mud before you can do anything with it. But today is different. Today is a full-blown snow day.

Now, not everyone thought that three inches of snow was enough to call it a snow day. And maybe if the temperature had been over freezing, and maybe if we were even remotely prepared for weather that wasn't hotter than Satan's crotch, that might make sense. But just to be on the safe side, a bunch of school districts closed - just not ours. And when I called work, they were quite clear that there was no inclement weather threat. So off I went, dutifully, taking my daughter to school and then driving to work.

Here's the thing. We are the worst cold weather survivors on the planet. We can crash our cars on a four-inch-long strip of black ice, and we get all kinds of black ice because local businesses turn on their sprinklers overnight right before the mercury drops to 20 degrees. In other states, I would have snow tires, and government trucks would be out throwing salt on the roads. Here we just have sand trucks, and they only come out when there's virtually no possible excuse for throwing garbage on the roads. When there are actual dangerous conditions, and the roads seem to be covered with a layer of KY sex lube, those truck drivers get scared and call in sick.

I should have known after the third time I spun out trying to leave a stop sign that the roads were a little sketchy. They weren't as bad at 7:15, but by 8:30 there was so much slush on the road that it was a little like driving on jello. Sometimes your tires would grab, and sometimes - not so much.

By way of example, to illustrate how slippery the roads were this morning, I will tell you how I wrecked my car.

To get on the freeway, I have to drive over a bridge. The bridge makes a turn at the bottom so that you can point your car the same direction as all the other cars that are driving at 70 miles an hour regardless of whether the road is covered with more ice than an Olympic skating rink. So as I came over this bridge and headed down the other side, I had to turn the car. Only the car wouldn't turn, because the road was slicker than dog crap on a freshly watered lawn, and I was headed directly out onto the freeway, but sideways, so that I could have a semi truck t-bone me into a fine paste.

The wheels grabbed at the last minute, which probably saved my life, but sent me into a mad fishtail. My car dodged back and forth like a punch-drunk boxer before slamming into a guard rail and spinning 180 degrees, so that I was moving backwards but still able to look at the oncoming traffic on the freeway as it barreled toward me and my nearly disabled train wreck of a car.

Happily, I didn't hit anyone else, and nobody hit me. I was able to limp home, after which I was able to cuss like a sailor about the fact that the sand trucks weren't out and the office still wanted to see me. Then I called work and told them that, thanks to the fact that my front bumper was ripped off and the right side of my car had been compressed enough that I could no longer open the doors, I was not going to be able to make it to the office.

Anyway, now I'm home, have been for several hours, and the snow is still falling out of the sky in chunks the size of grapes. My daughter is home now (I went and got her, because the roads were just getting worse and I'm not sure I'll be able to leave my driveway this afternoon), and she proposed to me that we make the best of a bad situation.

We made a snowman.

This is a big deal, because this is the first time in ten years of living in Texas that I can remember getting enough snow to make a serious snowman. We probably could have made a good eight-foot tall monolith and named him Gargantua or something, but we settled on the trusty three-ball, four foot version, and then decorated him with a hat, a couple glass beads for eyes, and an old pair of glasses.

I took pictures, so that I could share with the class. Here's the snowman. Like me, he prefers Winston full-flavor shorts. 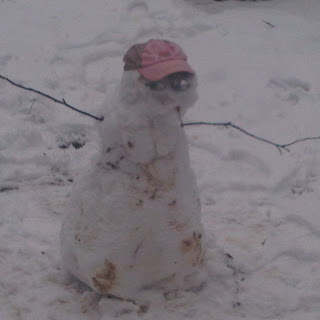 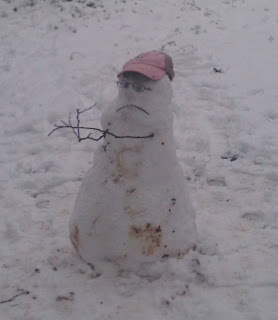 My daughter was outraged, so we made the snowman happy. Plus my daughter decided it was a snowgirl, not a snowman. I should probably affix boobs. 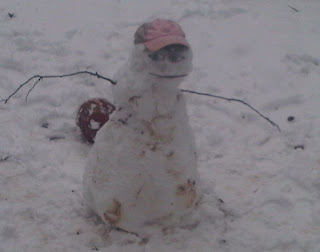 After that, we had a huge snowball fight. She hit me in the side of the head with a snowball the size of a grapefruit. All's fair, I suppose, so I pick up a double handful of snow and shoved it down the back of her shirt. Then I ran in the house.

Now we're waiting for the pizza and the tow truck. I don't much care which one comes first.
Posted by Matt Drake at 10:00 AM

Really sorry to hear about it, but I'm glad you took the time to have fun with your daughter. Helps keep the day goin.

Mate, i am sorry for your car, but in some wierd sence, happy for you. Now you can absolutely clearly tell everyone else, that you've been to a russian winter. We have same driving conditions for about 3-4 month in a year, and it seemes allright, if u do get into accident. Gives you an extra family-spare time :)."Shit happens" we say to our manager later ))))

Ha, I'm right there with ya.

I just discovered this blog over the weekend, and have been reading over your past posts - great stuff.

Didn't realize until today that you're in North Texas too. Are you in the Dallas area or Fort Worth area?

I'm in Arlington, and I went in to work this morning at around 7 and the roads weren't terrible, but then I soon realized that it was only gonna get worse, and left (along with the dozen or so other people that bothered to show up) at around noon, at which point the parking lot was basically one big vat of snow slurpee - mmmm, snow slurpee.

The power went out for about 4 hours when I got home too, which was great.

All that being said, given the amount of snow that's on my car and in my driveway (and the lack of a shovel or anything resembling a plow), I think I'll be working from home tomorrow.

Sorry to hear about your car, but glad that everyone is okay.

Well Matt, your life is nothing if not interesting. Never a dull moment, eh? Some gamer friends in South Arlington made a full on 7' tall igloo, with 7" thinck walls. Damndest thing I ever saw in Texas.