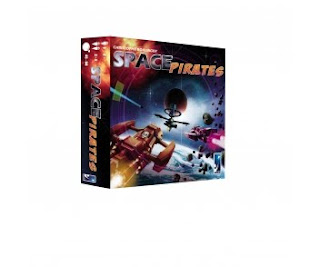 When I was a kid, I remember watching a movie called The Ice Pirates. It was about these spacefaring ne'er-do-wells who stole stuff, I think. The only thing that really stuck with me from my childhood was a mechanical torture device, kind of like a bear trap that snapped open and shut, and the bad guys put Robert Urich onto a conveyer belt that would feed him into the metal jaws, which would then bite him in the junk.

He escaped, family jewels intact, in case you were nervous.

Some twenty odd years later, I sat down to play Space Pirates, and thought, 'man, I wonder if there are nut-chewing bear traps in this game.' I kind of doubted there were, to be honest. That seems like the kind of thing that would not be considered family-friendly.

I was right. No bear traps of any kind. Instead, what's in the box is a really cool hybrid game, essentially a strategic dexterity game. And by 'dexterity game', I mean another one of those games where there are little discs that you hit with your finger and make them slide all over the table. But unlike Pitchcar (which is fun, but has less strategy than a trip to the grocery store), Space Pirates demands that you play well if you hope to have a prayer, unless your opponents are as clueless as you are, in which case you're going to be there a very long time.

The discs that you'll be flicking around are the freighters. They have the freighter on one side, and different kinds of cargo on the other. A few of the freighters are disguised - two of them are actually police that will chase you around if you accidentally rob them, and two of them are asteroids that you're apparently too stupid to avoid. The captain of the pirate ship probably sees some blip on his radar and says to his crew, 'go get that!', and then his brain-dead pilot, after seeing that their target is, in fact, a giant rock and not a space-bound treasure trove, decides to run into it. That pilot might be a candidate for the nut-chewing conveyer belt.

Your goal is two-fold. First, you have to get 20 MegaCredits. Each piece of cargo is worth a different amount at any given pirate base, so you'll fly out, maneuver over the top of these freighters, capture them and return home to sell them again. You move your pirate ship by playing energy cards and setting up your move with little templates, but the real problem is that your opponents will be flicking the freighters away from you, which can be mighty irritating.

The second goal is to buy a pirate base. This is not that hard, really - by the second time you visit a pirate base, you'll probably have enough money in your pocket to buy it. Then you can refuel for free, sell your cargo, and bribe the cops. Having your own base is a huge advantage, but it's tough to manage until you've made a couple passes through the universe to collect innocent freighters and steal their crap.

The main problem I have with Space Pirates is that it's over too fast. The goal of 20 MegaCredits is not impressive, because you can probably gather that much cash on one quick trip through the galaxy. Basically, that means that the player who can stock up fast and hit a base twice in a row is probably the winner. It's not that the strategy suffers, really, it just feels like it's done before you get to use all the cool stuff.

Thankfully, the game's designer (Cristophe Bolinger, who created Dungeon Twister) probably felt the same way. The rules have recommended goals for multiple players that are quite a bit higher than 20, which means that you'll be at the table longer, but you'll probably have more fun. My personal opinion is that the shorter endgame rules were probably grafted onto the game after the fact, to try to keep playing time under an hour. This is one case where the game designer probably wouldn't have minded if the publisher found himself sliding into a groin-eating man trap.

I'm kind of a sucker for cool dexterity games, so Space Pirates appeals to me purely for novelty value. But then, I also like games where I have to play smart, and Space Pirates hits that sweet spot, too, so now I'm liking it twice. It's fun to knock the little freighters around, and it's cool to play a game where you have to move around the table instead of just sitting on your ass until your legs fall asleep. The strategy isn't too heavy, so you can enjoy it with kids, but it's not paper-thin, either, so you can have fun with your drinking buddies. Basically, Space Pirates is about as close to a one-size-fits-all game as I can remember seeing. Of course, that means there are probably tons of people who will hate it, but I don't care. Those people can slide right into a set of crotch choppers.

Cons:
Not involved enough to please people who only like complicated games with lots of rules

Good news! Dogstar Games has Space Pirates! So if you're looking for a game that you can enjoy with just about anyone, and you don't have fingers like rolled up newspapers, you should buy Space Pirates from Dogstar.
http://www.dogstargames.com/product/Asmspacepirates
Posted by Matt Drake at 4:57 PM

Don't care much about "Space Pirates," but "The Ice Pirates"... that's one of those movies that I have really fond memories of watching as a kid. It has kung fu robots! What more do you need? I recently streamed it over Netflix. It was dumb fun when I watched it as a kid and it's held up fairly well in that vein.