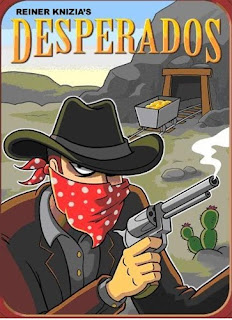 Desperados is a boring game. Knizia fans will love it.

There are times when I wish that was all I had to do to write a review. It would save so much time if you could just take my word for it. But since I doubt I could carry much of a reader base if my reviews were all two sentences, I probably ought to explain.

In Desperados, players are prospectors who open mines and then extract gold, silver or copper. Then they hire gun-toting hoodlums to steal mines from the other players. Then they take naps, because the game is boring.

In typical Doc Knizia fashion, Desperados is a lot of math and tricky number play and not a lot of theme. Now, I will give the game one point right off the bat - the miner-forty-niner thing feels a lot less artificially grafted than most of Knizia's work. In fact, it's nearly high praise that I can't actually think of another theme that could replace the prospector backstory, given the way the game plays. I would love to incorporate a joke about processed meat or illegal narcotics, but really, I think the crazy prospectors actually work here.

Every turn, you can do one thing (that's pretty much a Knizia rule). You draw a card, play a card, or pass a card to your partner. If you play, you can open a mine, put some coins on a mine, close a mine, or try to steal a mine. And since the game is supposed to be four players working as partners, you can slide a card to your partner to say, 'hey, look at this double gold coin! Why don't you open a gold mine?'

The problem is, even the parts where you play claim jumper cards is not interesting. There's not a lot of planning, or hand-building, or sacrificing current rewards for long-term payoff. You just kind of play your cards and see if you win. It's not Go Fish or War, but it's not much fun.

However, I fully expect to be chastised by Reiner Knizia fans who tried the game at a store or convention or something and think that it's the best thing since a caveman saw a cow and said, 'man, I'll bet that thing's ass would be delicious if I threw it on a fire.' It's got all the traditional Knizia markings - limited actions, succinct rules, and a whole lot of adding. This one even has multiplication. It's not completely devoid of potential, and if you love games that you can learn in five minutes and play in fifteen, Desperadoes may be right up your alley. That's not me, but it might be you.

Now, while I think the game is boring, I may keep it anyway. The art in Desperados is awesome. Instead of flipping through the standard book of stock images that seems to get used in nearly every Knizia game, Gryphon hired a really good illustrator. It's cartoony as hell, so don't think you're getting a Van Gogh here, but the pictures (particularly the bandits) are a boatload of fun.

In fact, I may end up grateful that the game is boring, because I won't feel the least bit upset about sticking the desperado cards to my wall with thumbtacks to decorate my office.

Cons:
Boring
Low on interesting options
More math than I like to do in a fifteen-minute card game

Desperados is kind of boring, but you might like it anyway, especially if you're boring. You can find it here:
http://www.eaglegames.net/ProductDetails.asp?ProductCode=GRY015
Posted by Matt Drake at 6:41 PM