Board Game Review - Chaos in the Old World 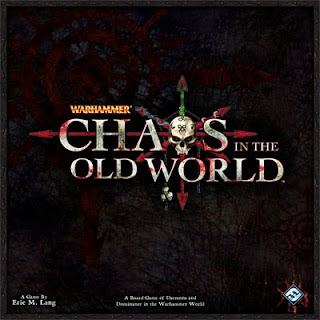 I'm a fan of a good theme. I can recognize a good game, and I really like Agricola and Race for the Galaxy, but my favorite games always have some backstory, and probably some good old-fashioned killin'. So Chaos in the Old World seems like it should be a flat-out winner on theme, except for one teensy little factor: You're all demons.

Maybe I just don't have enough villain in my genetic code, but I like being the good guys. When I played Star Wars as a kid, I wanted to be Han Solo (and not just because the cute girl from next door was always Leia). I never wanted to be Mola Ram or Doctor Doom. I want to be the debonair, swashbuckling rogue with a quick wit and a fast gun. I don't mind games where I wind up being the bad guys, exactly, as long as someone gets to be the heroes, and even then, I end up silently rooting for my opponent to beat me just so the Ring can make it to Mount Doom.

But in Chaos in the Old World, the players are the four chaotic powers (also known as demonic deities or 'bad guys'), and you're in a contest to see which of you can be the first to rip the Old World to shreds and eat its liver with a nice chianti and fava beans (I should note that Hannibal Lecter is an exception to my 'be the good guy' rule, because he tends to kill bad people a lot and is ludicrously cool. I also like Dexter). You'll corrupt, despoil, murder and foul the nations of the Old World in a mad rush attempt to destroy everything before your opponents can turn their own little corner of the continent into a Hell on Earth (otherwise known as Newark).

However, even if I do kind of wish I could be the good guys, this is one hell of a good game (yeah, I meant to say that). It seems like it should be a lot more difficult or complicated, and take a lot longer, but it turns out that it's a balanced, exciting game with little room for error and an incredibly tight design.

The basic mechanics can be learned in the first ten minutes. You all use your power points to play cards and summon followers, then you fight each other, then you ruin things. Obviously there's a little more to the game than that, but if you can grasp the basics, the rest follows right behind. You'll find that within a turn or two you'll know exactly why you may want to bring out that fat demon with his guts falling out, or infect a country with a disease, or try to seduce the beautiful princess (honestly, if you need me to explain why you might want to seduce the hottie in the tiara, maybe you should be reading about My Little Pony Monopoly).

WIthout knowing anything about the game, you might think Chaos in the Old World is a little like Risk. You've got these fantasy-themed bad guys who summon armies of evil minions, and you've got areas to fight over, and yeah, that sounds like it could be a global domination clone. It's not, though. It's all about placing your guys carefully, calculating whether you can take The Empire with one more cultist, weighing the odds of beating the Bloodletters in a fight, and then tearing limbs off the local peasants to see if they taste like Little Debbie snack cakes.

Some of the genius in the game is that each of the four Chaos gods plays very differently. Slaanesh wins by corrupting the world's rulers, Tzeentch wins by exploiting dark magic, and Nurgle wins by spreading disease. Khorne wins when he kills all those other pansies, or if he can clean out your bowels (a little double-meaning word play - you know, because corn is good for pooping). The different ways in which these villainous deities get stronger depend on their overall goals, and the actions they can take tend to manipulate the game to either further their own goals or slow the others. A careful balancing act is required to advance your unholy plans while keeping your opponents from getting ahead.

While each demon plays differently, they all have one thing in common - if you make mistakes, you will lose. One cultist summoned in the wrong nation, one card played when you didn't need it, one miscalculated die roll, and you'll hand the game to your enemies (at least, until they do the same thing). In a lot of games, the luck tends to allow the weak player the chance to beat the old pro. In Chaos in the Old World, the dice serve to keep things interesting between the players at the top - a contest between two skilled players might be decided by dice, but if you outplay everyone else, you'll win.

I think the thing that surprised me the most about Chaos in the Old World is that it came from Fantasy Flight. Not that they don't make good games, but when FFG makes a big-production game, it tends to be a little on the sloppy side, and often far more confusing than is necessary. Chaos in the Old World, by comparison, is tighter than a kettle drum made of human skin. There are no unneeded components, and unlike some of the other huge games from FFG, you won't be so busy trying to figure out your own turn that you can't follow what everyone else is doing.

Of course, Fantasy Flight wants to make sure their games are recognizable, so they had to make some sloppy errors somewhere, or we might think the game was made by Rio Grande (no, we would not. Rio Grande specializes in games where nobody dies. FFG specializes in games where so many people die that they put blood on the game board ahead of time). So to keep from disappointing the fans who have come to expect stupid playtest errors and glaring mistakes, they went ahead and misprinted the Slaanesh card, and made a mistake or two in the rules. I recommend this game, and I recommend that you absolutely NOT play this until you've read the FAQ. Otherwise Slaanesh is going to win an awful lot.

The flip side of the slop that Fantasy Flight seems to deliberately work into their games is that they always have the prettiest games. While the game board does depict a map drawn on skin and fastened with rusty fishhooks, the graphic design is fantastic. Plus you get a whole bunch of cool pieces of plastic that look like hookers with crab claws or globs of snot with droopy eye sockets. It's gruesome and distasteful, but man, is it pretty.

In fact, with all the glitz and killer game play and razor-sharp balance, I can overlook the fact that I want to be the good guys. This is a brilliant game, demons or not. It's unforgiving and fast and exciting, and by the end of the game you'll be ruining nations and slaughtering innocents and laughing the whole time. Don't sit down to play unless you brought your thinking cap, but if you're up to the challenge, you'll find that Chaos in the Old World serves up an incredibly good time.

Maybe next week I can be Johnny Quest. You can be Hadji.

Good news for anyone who has been paying attention: Dogstar Games carries Chaos in the Old World! In case you're new, this is good news because Dogstar Games supports Drake's Flames. And that's good news because, when you've pissed off as many publishers as I have, it's nice to have a way to score those popular games you really want to hear about so that you don't have to read three reviews a week of small-press games printed on corrugated cardboard because they're the only people who still send review copies (except Asmodee - they're awesome). So go here, save like twenty bucks off retail, and tell 'em thanks for keeping this site in business:
http://www.dogstargames.com/product/FFGGW01
Posted by Matt Drake at 4:31 PM

Reading this review has finally cemented my resolve to purchase this board game, at the suggested you listed nonetheless.

I salute you, sir!

Have you considered doing video reviews by any chance?

sounds great, but the wife would not be happy with this one, so I maypass for a while, but then maybe I will just buy it when in Ohio and keep it there for safe keeping - great review as always thanks for sharing!

Video reviews are not on the table. I'm a writer, not a performer. I've got a face for radio and a voice for newspaper. Plus I don't have a video camera.

I would have gotten this game but for the extremely objectionable theme for kids and young teens.

Given that i have been an avid warhammer fan for the past 15 years. And a chaos player in its table top version this game came natural to me as a must buy. Ironically my girlfriend bought this for me as a valentines day present.. :S lol all in all the rules seems a bit complex at first and a bit daunting... but after a turn or two you get the idea and it becomes easy to play

This was the best game of 2009, the theme is strong, the gameplay is strong and the game is attractive.

Sure, the board is made up of a depiction of stretched human skin, but that just ties into the theme.