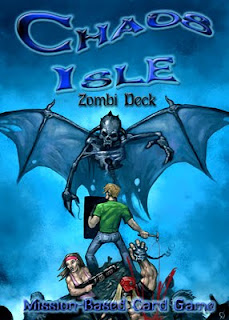 I've said before that if you can't afford art, you've got no business making a game. Good, consistent art and well-crafted graphic design make a game more fun, and more than that, they show commitment to the product. If you cheap out on art, you're liable to cheap out on components, and if you're cheap there, you're probably cheap in playtesting, too. Quality publishers know this, and they also know that good art shows the customer that you're serious about your game. Bad art means bad game.

Chaos Isle seems out to prove that you can have amateur art, inconsistent design, and a rinky-dink website, and still have a really fun game. In fact, I'm a little amazed at my response to Chaos Isle, because it seems to violate every rule of professional game design. Most of the cards have gorgeous art by Swedish illustrator Christer Degerman, but you can clearly see where the designers of Chaos Isle ran short on bank and drew some themselves. The monsters are terrifying and creepy and evocative, and then the characters look like they were drawn by a high-school sophomore who just bought 'How To Draw Manga.' And let's not talk about the intensely bad drawings on the task cards, which appear to have been slapped together with clip art and Microsoft Paint.

And the graphic design is a little confusing, too. There are four kinds of cards - missions, characters, enemies and equipment - and they all have the same picture on the back. They just have the logo in a different color and a word at the bottom to tell you what to expect on the other side. This makes it a bit confusing to sort them, and it's especially unfortunate because it would have been easy to fix by giving them different pictures on the back. Of course, that would have required three more pieces of art, and from the looks of some of the card art, budget was a pretty big consideration (as in, it was a big factor - obviously, the budget was very small).

If you combine the widely varied quality in the card art with the unfortunate graphic design choices (and the card-back thing is just one example of weak design - there are more), the average game snob is going to giggle through his nose at Chaos Isle. But like I said, I'm wrong a lot, and I gotta tell you, I can't wait to play Chaos Isle again. It's like a heaping spoonful of B-movie awesome.

Every player represents a survivor of a man-made localized apocalypse at an island called Chaos Isle. You're all apparently either really stupid, totally crazy, or you're just not fluent in English, because otherwise I cannot imagine a single good reason I would ever visit a place called Chaos Isle. It's like taking a vacation to Enema Bay - I don't care how warm the water is, I don't want it shoved up my ass.

The main reason to avoid Chaose Isle (aside from the unfortunate and prophetic name) is that the totally crazy Doctor Z has created hordes of bizarre monsters. The funny thing is, these monsters are called zombis, and that's funny because in nearly every case, they are not the least bit humanoid. Especially the Corpsemare - that's a horse. Apparently Doctor Z thought that if he dropped the 'e' off the end of 'zombie', nobody would notice he was making giant worms and very irritable mole rats.

Your goals are all different. One survivor might be trying to create a bomb that will destroy the zombis, another might be looking to scavenge enough gas to get the chopper started, and yet another might just be trying to infect the food supply and turn the entire world into monsters whose theme songs would be a cross between Iron Maiden and Pink Floyd. Your mission cards tell you what you're trying to do, and it's always a matter of collecting enough resources.

The resources are carried around by the zombis. For a completely inexplicable reason, the flying skeleton is likely to have a gas can and a barrel of gun powder stuffed into his body cavity, which you can recover when you kill him (I actually like to think of this as if he was guarding the resources, but it's funnier to imagine him flying around with a bottle of nitroglycerin and a cooler of blood samples). Every time you kill a zombi, you get to keep the card, and when the resources on your cards add up to the requirements of your mission, you win the game. But the tricky part is that the zombis don't exactly sit around like clerks at a convenience store. They fight back, and some of them are mean as hell.

If you play Chaos Isle enough times, or even once with enough people, someone is going to get killed. And this is where it gets awesome, because if you die, you're not out. If you die, you're a zombi. And instead of trying to gather resources, you fight the other players. If you can manage to kill everyone else, then you win even though you lost. This crazy element turns player elimination on its head - you might actually be hoping to get knocked out of the game, just so you can try eating everyone else.

Now, Euro nerds are going to hate Chaos Isle like it came with a supply of flesh-eating bacteria. Every turn, you flip three enemy cards, and decide which to kill and which to avoid. You can't dodge the real fast ones, and those are always the meanest. So you roll two dice to hit, then the monsters roll to hit, then you roll again, and this goes on until one side is dead (that one dead side? That could be you). I don't usually like games with this much luck, but this one is so thematically entertaining and madcap hilarious that I don't have any kind of problem with it. In fact, the luck makes it better - and you won't hear me say that very often.

Another brilliant feature of Chaos Isle is that you're not stuck playing just one kind of game. There are four modes in the base game, including solo rules and a hilarious survivor mode. Then there are three expansions (and if you're going to get the game, get the expansions at the same time. You'll be glad you did). Each expansion includes two more ways to play, from zombi cage match and ultimate big-game hunting to cooperative and team play. If the game ever gets stale, you can switch it up and try something new.

I really hope there's at least one more expansion in the works, though, because there's an element of Chaos Isle that is missing, and is glaring in its omission - the option to screw with the other players. I really wanted to see some enemy cards that would let me steal from my opponents, or send more monsters to see them, or make them blow some combat rolls. This is already such a chaotic, blood-frenzied dice fest, there seems no reason to me not to spend the entire game trying to torpedo everyone else at the table.

And you know what it means when I hope they make an expansion? It means I'll buy it, sight-unseen, because I really like this game. I've played it several times since I got it, trying different game modes and mixing in different expansions. I'll play it several more times, even though I don't have to play it because the review is done, just because I really like it. It's over in like ten minutes, it's hilarious, and it's a blast.

After playing Chaos Isle a whole bunch this week, I've even changed my mind about the art. The character art really is cheesy and low-budget, but it grows on you, and makes the 'heroes' of the game more entertaining for their campy presentation. I'm not suggesting a professional artist wouldn't have been a welcome addition, and I still wish they could have afford a seriously talented graphic designer, but this style tells me something when I play this game - these guys are having fun. They love cheap schlock, and if you like it, too, then you'll like their game. It won't be one you pull out when the in-laws visit, but it might just become your next guilty pleasure.

Pros:
Smooth, easy play
Crazy cool theme
Fast as lightning - over as quick as you want it to be
Lots of different ways to play
Neat art on most of the cards
Campy game that just feels like fun

Cons:
Invest heavily in dice - you might wear out a pair every time you play
Seriously rookie-night production (though that doesn't bug me like it did when I opened the box)

Right now, the guys who make Chaos Isle are just itching to get you on board. They're offering everything you can get for the game, plus some totally bitchin' zombie dice, for ten bucks off the total price. That's a great deal, and if you can get behind a fun, campy, crazy card game that plays different every time, go here and buy the bundle:
http://www.realmsmastersgameforge.com/tearmylimbsoffbundle.htm
Posted by Matt Drake at 8:50 PM

Thanks for telling us something about this game, the website is unfortunately crappy and there aren't enough news on BGG.
Now that I know about the promo pack, I'm gonna buy it tomorrow. Gonna tell them you made my mind :D

Thanks for letting me know about this game and the link to the great deal on the website! In for one!

Got it, played it, found it really confusing, trying to register on the RMGF website without success :C
But people like it! It's just that I would like to know if I'm playing it RIGHT.

Never Fear, Hanamigi!
The website has been under heavy construction lately, it should be all set now.

There are are 2 other ways to get rules help without going through the Forum:
1. Visit the FAQ from our Survivors (Organized Play) Website here: http://www.freewebs.com/chaosislesurvivor/faq.htm
2. Send us an email directly. We will be more than happy to answer all of your questions! jperry@realmsmastersgameforge.com

PS: We certainly don't pretend to be web designers but we hope the new look at least is no longer 'unfortunately crappy'!