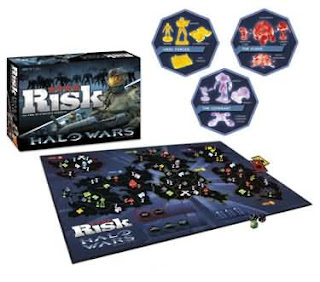 I know a lot of snooty gamer types aren't big fans of RISK, even the new one, because you can get it in Wal-Mart and there's a lot of die rolling. Then there are a bunch of snooty gamer types who hate Halo because it's a video game, and those are for the unwashed, unintelligent masses. Stupid people play video games, and smart people play board games.

Well, I love RISK, and I love Halo, so RISK: Halo Wars was a double-shot of kick-ass espresso with a lemon twist. I especially love the new RISK, now that they made the win based on objectives, rather than complete global domination. RISK: Halo Wars is built on top of the new version of RISK, with a tweak or two to make it a Halo game. And that means I just had to try it.

Man, was I disappointed. Not because it sucked - it's still really fun, especially because it's still RISK. But I was disappointed because I have RISK: 2210 and RISK: Star Wars, and those both start with classic RISK and take it in thematically brilliant directions. Halo Wars is not similar to new RISK. Halo Wars IS new RISK, but with a couple additions stapled onto it. It's like if your old high-school girlfriend got a boob job - she might look better, but she's still just as much fun in the sack (unless she's really let herself go, which she may have, because it's been a long time since high school - but to be fair, can you honestly tell me those love handles and beer gut are an improvement over the six-pack you were sporting when you were 17?).

The map for Halo Wars is of a new planet, but it's a remarkable planet in that it is almost identical to Earth. All the continents have new names and new shapes, but they connect in the same way to all these other continents, and have the same number of territories, and provide the same number of bonus pieces. You can push some borders around a little, but just calling it Pacifica does not mean that we suddenly don't know that's Europe any more. If I wear a paper mask I find on a cereal box, it doesn't make me Count Chocula, even if I do use a silly accent.

Combat is the same as it always has been, except for the heroes, who provide almost no help and then die just to respawn on your next turn. Win a battle, get a card, control the right spot and complete an objective - if you've played new RISK, you've seen this one. Just because the army units look like Halo guys doesn't mean this is a new game.

I might have been a little more impressed if I hadn't played some really awesome RISK spin-offs. RISK: Star Wars adds space battles, cards, and a Death Star that can blow up planets, and it feels like a Star Wars version of RISK. RISK 2210 adds nukes, moon bases, undersea colonies, and a whole lot more that makes it my absolute favorite RISK version. But Halo Wars adds weak-ass heroes and figures that look like candy and pretends to be a new thing, and it's just not.

Pros:
All the same pros as new RISK
Pretty pieces that sort of look like Halo guys
Nice components, over all

Cons:
Nothing new here, except for heroes, which are nearly worthless
Four or five players is a team game, whether you like it or not

LOL, I love how one review can spill into another. Just read the Chaos in the Old World review, and wouldn't you know it...right here, just above, is Hadji.