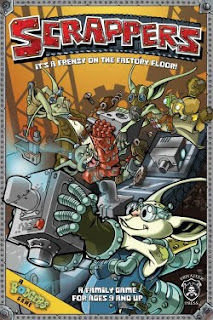 I’m not much of a philosopher. I tend to take things as they appear, unless they’re ugly or slimy or gross, in which case I leave them where they were. But the new game from Privateer Press, Scrappers, has me asking a lot of questions for which there can be no answer, and then I start asking stuff like, ‘what is the sound of one hand clapping?’ and ‘how do I know when it’s love?’ and ‘why did anyone ever think Sammy Hagar could possibly replace David Lee Roth?’

See, the game is about these goblins who make stuff, only they’re not called goblins, they’re called bodgers, which sounds like badgers, but they are, in fact, not animals at all. They’re goblins, but they work in a factory and make weird stuff. What does this stuff do? That’s what I’ve been asking myself!

Pieces and parts flow from one end of a long conveyer belt to the other, and these bodgers run around trying to pick up the pieces they need to assemble one of these devices that, as far as I can tell, has no purpose other than to be built. The bodgers may know what the machines are for, but we never will. That’s one of those mysteries of the universe, along with the number of licks it takes to get to the center of a Tootsie Roll Tootsie Pop.

The next part has me asking myself about the nature of free will, as the bodgers are not free to simply move around the conveyer belt and grab the pieces they need. The players (who, in an incredibly existential move, assume the identities of the not-goblin/not-badgers) each have three cards a turn, and the bodgers may only move when they push the buttons on those cards. They may not choose which buttons to push – they must push them in order, from top to bottom, and only have the option not to push the next button down. Are they slaves to their own minds? Are they automatons controlled by a greater power? Why did Fox cancel Firefly but renew Dollhouse?

I may be over-thinking this a little. The card thing is probably just a cool mechanic meant to limit your movement while forcing you to consider various options for maneuvering around the board. In fact, I would be fairly surprised to find out there is a deep philosophical meaning behind this whole thing. It probably is just used because it works so well.

See, if we quit trying to think deep thoughts, we can see that the card movement provides a staggering amount of strategic depth for a mechanic so simple. You could play the card that lets you move, swap places, and then reverse the conveyer belt, thus putting you in front of the card you want, or you could pass, hoping that your opponents will act, giving you the opportunity to come back into the round, but now with more cards than they have. You might accept a less desirable action just to hold on to the card with all the fight points, so that you can have a better chance to win the brawl for the piece you want and also deprive another player of the chance to improve their own machine. You’ll scheme and plan and try to think three turns ahead, and then your head will hurt even more than if you were trying to figure out why the dryer only ever eats one sock.

Scrappers includes optional rules for adding new characters to the game, but considering the amount they add to the game, these rules should not be considered optional. I wouldn’t even consider playing without them. The rival bodger competing for pieces just so she can throw them away is an irritant, but the child bodger who runs around the factory floor chucking pieces into the trash is positively frustrating. However, if you manipulate these two extra characters properly, you can set up some amazing chained actions that have everyone else cursing your name while you strut away with the piece you just stole.

At any rate, after everyone is done moving, they grab the part in front of them and add it to their machine, if they can. This is when fights break out, because two bodgers might be fighting for the same part. Where people (or goblins, or badgers) might settle such a dispute with violence, the bodgers continue to display their strange, inexplicable behavior by playing more of those cards with the buttons. The fact that there’s a fist on the card might indicate bloodshed, but nobody dies, so it’s obviously not very interesting violence.

It took me a full game of Scrappers to begin to see the genius in the game. At first it seemed a little bit like I couldn’t control the way the game went, but as I began to see the layers of deceit and tactical risk-taking, my eyes were opened to yet another mystery of the universe – how is it that a game can be boring on a first play, and brilliant on the second? And please, ignore the fact that we played it wrong the first time. I prefer to blame the magic of philosophy for my enlightenment, and not my discovery that Scrappers is actually a damned smart game. If you’re just hoping to see lucky cards save the day, you’re going to fail, but if you can plan a complex series of moves and outmaneuver your opponents, and make the best of whatever you’re dealt, Scrappers has the potential to blow your mind, at least for about half an hour.

Then you can go back to wondering what I wonder most of the time when I see women on television:

Pros
Really great art
Very entertaining concept
Simple maneuvering game with multiple layers of depth and strategy
Lots of chances to bluff, stall, plan ahead, or otherwise think outside the three cards in your hand

Cons
Slow burner – might take a game or two to see the genius, and you might still not like it
Sammy Hagar. That has nothing to do with this game, but he really does suck

If you like a quick game that will make you think and then curse and then think about cursing, you can run over here and get yourself a copy of Scrappers:
http://dogstargames.com/product/BodgersScrap
Posted by Matt Drake at 4:07 PM