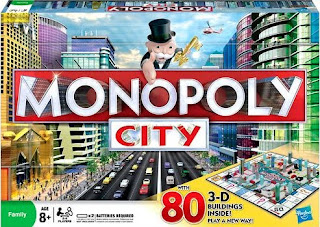 It's kind of nice, every now and then, to see an old franchise get a little pick-me-up. Sure, there are like a bazillion versions of Monopoly right now (bazillion, in case you're wondering, is a slightly smaller number than a bajillion, but greater than a metric assload). But the thing about all those themed Monopoly games is that, no matter what you call them, they're just Monopoly with a thin veneer of theme slapped on to get the suckers to buy it. (My in-laws, for instance, own Monopoly Yankees, where you build monopolies by collecting several baseball players in sets. My mother-in-law will make absolutely ludicrous trades if she can get Derek Jeter, because he's dreamy.)

Monopoly City, however, is not just a repaint. It's a whole new game, with the heart and soul of Monopoly, but with enough interesting twists to make old fans into new ones. Unless they're actually old, but have always been fans, in which case it might make old fans still be old, but get them to buy another version of Monopoly.

At the very basic level, this is still Monopoly. You've still got the same basic board layout, but instead of Baltic and Mediterranean. now the slums are Summergate and Seaside. Boardwalk and Park Place are replaced with Diamond Hills and Fortune Valley. The names might be changed, but it's the same game - for now.

The game works the same way. You move around the board, buy properties, improve them, and charge rent to the other players. But several things make this version a whole hell of a lot more interesting. For one thing, you can build on a property right out of the gate, so you could have one single spot on the board with astronomical rent, even if you don't have the rest of the properties in that color. It's expensive, but feasible.

Another important change is that auctions are going to happen a lot more often, thanks to varied Chance cards and several auctions spots on the board. Because anyone with any sense knows that you never pass up on a property if you can afford it, these auctions can get pretty pricey, pretty quick. To keep it interesting, there's a little electronic doodad that times it out and warns you when the auction is about to close, because the high bidder at the end of the auction wins, even if someone else would have gone higher. This panic-mode bidding war can cause players to make really stupid bids if they get carried away. My daughter, for instance, paid ten million dollars for a property that was worth one million. Then she was mad at me for a very long time.

So far, I'm hooked. This is a cool new way to play Monopoly (a game I already love to play), but with several new elements that balance out some of the more irritating things about the old classic. But when you add in hazard buildings like sewage treatment plants and landfills that can ruin property values, and then you add in stuff like schools and parks to protect your high-rent districts, you wind up with a pretty clever balance that keeps the far-ahead leader from running the table. You can even build a stadium, so that you can get a little extra green every time you pass Go.

There are more differences, and they're cool, but in the end, this is still Monopoly, but better. The best negotiator is probably going to win, but not even a silver tongue can make up for crappy luck, and if someone else manages to roll like Jesus had a personal stake in the game, there's not a whole lot that being smart can do about it. It's faster than traditional Monopoly, has a bunch of cool plastic buildings, an electronic widget, and a little bit of an equalizer for the guy who goes around the board four times and never lands on a property, thereby watching everything get snatched up while he sits there looking at his one orange property and collecting spare change every time someone walks past on their way to drop a couple million on a new parking garage.

Now, there are a few things to keep in mind. For starters, it may seem like there are a lot of ways to avoid rent, and to a certain degree, that's true. There are taxis and rent dodges and railroads, and all these things can help players move to where they want to go without having to land on those backbreaker properties. However, this means that there are exceptionally strong incentives to make sure you trade - you need several properties in a row, because if I own every other spot, it's going to be easier for me to avoid yours. A little strategy management can hook you right up.

Another thing that might look like a hiccup is that you can't always dictate what you get to build on your turn. The electronic gizmo tells you what you can build on your turn, so you can't always get the condo you want, and have to settle for a strip mall. Where the rent dodging didn't bother me as much, I found this a little irritating. If I can afford a house on every property, don't tell me I can't buy it. I want to spend my money, dammit. It's not doing me any good in my pocket (unless I land on something expensive, and then that's my dumb ass for not saving up).

If you already hate Monopoly, Monopoly City isn't going to change your mind. But if you like the idea of Monopoly and just wish they would fix the broken parts (like the time thing, which is resolved with a timer in the electronic doohickey), you should run right out and pick up Monopoly City. And if you only play games where people die, then you can ignore this review and go back to reading about Space Hulk and seeing every third gamer nerd on the planet get excited and show how he painted his genestealers.

If you're a Monopoly fan, you're almost certainly going to like Monopoly City, and you can get it right here:
http://www.hasbrotoyshop.com/ProductsByBrand.htm?ID=24233&BR=539&pn=Products%2FCatalog
Posted by Matt Drake at 5:55 PM

sounds great, a shorter better version of an old classic, I would so run out and get this if I didn´t need to hop on a plane or 2 to do it!

Liv, I'm going to keep deleting your comments for as long as they link to a place to buy cellphone headsets in Germany - or any other crap you're peddling, for that matter.