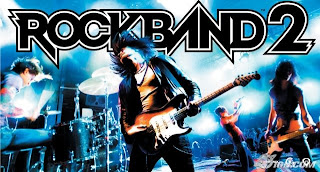 I was going to review For Sale tonight. I played it several times, had the review half-written in my head, and even had a couple ideas for stupid puns. And then my daughter's friend wound up spending the night, and she likes Rock Star, so we broke out the instruments and tore it up in the living room. And now instead of talking about a bluffing/bidding card game, I want to discuss kicking ass and taking names with fake guitars and a plastic drum set.

I wasn't into the idea of Rock Band at all. I thought it sounded stupid. I tried Guitar Hero in a Toys R Us, and thought it was one of the dumbest things ever. I couldn't have felt more retarded. So when my wife used the money my old man gave us for Christmas to buy Rock Star 2, I was not particularly pleased. I had plans for that money, plans that included games that didn't involve the television (and for Christmas, she also bought me Soul Caliber 4, which is total ass, but I haven't been able to bring myself to tell her that I would have much rather had Battlestar Galactica, so I played it anyway and pretended to like it).

My kids, on the other hand, were thrilled. They were so excited to break it out, set up the drums, wire up the guitar and microphone and get after it. Because, see, kids are dumb. They'll chase any trend, no matter how lame. For evidence, go to your local mall and look for a store called Hot Topic. It's door-to-door dumb trendy crap for kids who are trying to be different, just like everyone else. And dumb trends are the only way to explain Ugg boots.

At first, my kids were the only ones playing Rock Band 2. I was busy wishing I were reading through the rules for Dominion while I pretended to enjoy the books my wife bought me with the gift card my mom gave me. And then, as I sat there pretending to be enjoying myself, my kids played Eye of the Tiger.

I admit freely that I'm still stuck in the 80s. I was in eighth grade when Rocky 3 made Eye of the Tiger a huge one-hit wonder smash hit, and I still want to jump around in my drawers like Tom Cruise in Risky Business when that song comes on (and yes, I know Tom Cruise was listening to Old Time Rock N Roll. Don't bother me. I'm working here). So they started performing Eye of the Tiger, and my daughter was singing it, and she was murdering it. Totally ruining it. I couldn't stand it.

I walked up, took the microphone from her, and started to wail out the lyrics like I had big hair and lightning-striped tight pants. I tore it up. I even danced some. I mean, I was a total horse's ass - and I was hooked.

The next day we bought another guitar (Rock Band 2 only comes with one). My wife took over as lead singer, I play bass, my daughter is our drummer, and my boy is the baddest lead guitarist since Santana (you know, if Santana had a fake guitar with color-coded buttons instead of an actual instrument). I made a guy in a black t-shirt with no sleeves, torn jeans, and some frightening mutton chops. My son looks like Axel Rose and my daughter has pink hair and Gene Simmons make-up. My wife has a weird green pony tail. Our band is called the Toadstools, and we ROCK.

In case you're completely unaware of Rock Band 2, possibly because you live in a cave in Peru, here's how it works. You've got the capability to add up to four instruments - two guitars, a drum set, and a microphone. As a song plays, colored bars will scroll past, and you have to hit the right note at the right time (unless you're singing, and then you have to sing the right lyric). You get a score based on your accuracy, and you can play harder levels with more notes that come at you faster. Suck a lot, and you'll fail out. Kick ass, and you'll get lots of stars, which means money and fans.

But a mechanical explanation does not tell you why this game is so damned much fun. It's fun because you really get to feel like a rock star. You're Jon Bon Jovi, or Angus Young, or that one-armed dude from Def Leppard. You're rocking your pants off. I got all kinds of sweaty playing Rock Band 2 tonight, and I was just playing bass. Incidentally, I also came within half an inch of completely destroying the coffee table when I kicked out some jams (you won't ever hear me say that if it's not ironic), and I nearly fell over on top of my daughter's friend (who is incredibly skinny and probably would have died immediately).

The game comes with something like 80 songs, and you can download a whole hell of a lot more. We already downloaded a bunch of Cars songs (my wife is also an 80s fan) and Margaritaville (I have fond college memories of Jimmy Buffett. And no, I was not a stoner. I just liked the song). But you can get by with what comes on the disc - Modest Mouse, Nirvana, Lit, and even an AC/DC song. Sadly, the AC/DC song is Let There Be Rock, which as anyone knows is nowhere near as awesome as Dirty Deeds Done Dirt Cheap, but it's still AC/DC, so that's pretty cool.

I feel silly admitting my fondness for Rock Band 2, but at this point, I don't care. I love growling out the lyrics to Ace of Spades and then yelling to my kids (who are in the same room), 'Thank you Chicago!' (I do not live in Chicago). I love jumping up and stomping as I slam out the last bars of White Wedding. And I never get tired of playing that really fast riff in Eye of the Tiger with the guitar held over my head while my kids roll their eyes.

Pros:
Feel like a totally bitchin' rock star
Customizable levels of challenge
Lots of music to choose from, with more available to buy online

Cons:
You will feel stupid even if you're having fun
Only comes with one guitar
Selection of music needs work - I want some Van Halen, dammit

If you can't figure out where to pick up a copy of Rock Band 2, you don't deserve a link anyway.
Posted by Matt Drake at 8:45 PM

Good review of a good game. Only thing I would add is that the game thrives with multiple players and gets old if you're only playing solo. It's one of those games that the fun level is exponentially increased every time you add another player.

Oh, hell yeah. I wouldn't even bother with it solo. It's like going to a strip club by yourself - with friends, it's a fun outing. By yourself, you're a freak.