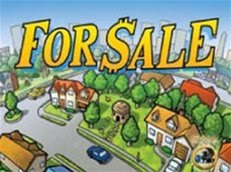 Game designers are filthy liars. They want us to believe some of the most ridiculous stories. According to game designers, I could walk from Iraq to Japan in less than a week. I could cross the Bering Strait by hopping across floating ice cubes. If I lived in feudal Japan, I could trade my grandmother for an army. And now this Stefan Dorra wants me to believe that I could buy a $1000 tepee and flip it for ten thousand dollars.

Dorra is perpetrating his fraud with a game called For Sale. In this game, you bid on different pieces of real estate, then you sell that real estate for huge profits. Except that Dorra thinks I'm gullible enough to believe that I could buy a castle in Switzerland for six or seven grand. How stupid do these game designers think we are?

For Sale tries to get us to believe that everyone really is equal by giving every player the same amount of money to start. That's obviously not true - look at Paris Hilton. That dame is born with an entire hotel chain in her wallet, and I'm stuck paying my own student loans. But no, For Sale tells us we each get a pile of coins worth nearly twenty thousand. Seriously? We're all equal, and that's all we get? That wouldn't even pay my mortgage for a year, yet I'm somehow supposed to use it to become a real estate tycoon?

The lie is furthered by telling us that we could buy ridiculous properties for this little pile of coin. Every turn, we're all allowed to bid on a number of properties equal to the number of players - a cardboard box might be up for grabs alongside a space station and a penthouse apartment. Everyone bids, and the lowest bidder takes the crappiest property, so if you end up taking that box for $1000, you just paid a hell of a lot of money for a cardboard shanty that probably smells of pickles and stale urine. On the other hand, someone else might get Skylab for less than the price of a used Geo Metro. That Stefan Dorra believes I would ever think I could get a space station for less than ten thousand dollars is an insult to my intelligence.

This bidding goes on until all the properties are claimed, and then the lie gets worse as we try to sell these properties. Now there are bills up for bid, and we blind bid for them with our properties. So now I might be able to sell that bum's sweet home for seven or eight thousand! Come on already! What kind of scammer would be able to sell a homeless guy a home for that much money? The last time I sold a homeless guy a refrigerator box, all I got was a pile of aluminimum cans and a recipe for gravy.

Once all the buildings have been exchanged for bills (and let me tell you, someone in make-believe land got a hell of a deal on Castle Neuschwanstein), everyone counts up their money, and the person with the most money wins. It's that simple. At least this part is honest - money can buy you happiness, or at least a win.

Now, while Stefan Dorra might be a sickening liar, he does know how to make a pretty decent game. While this sounds pretty simple, it's actually full of gut-wrenching decisions and requires good card-playing skills. The first phase is a tricky process of trying to outbid for the big properties while hanging onto your money for the medium-sized properties, so that you don't wind up picking up a doghouse. The second phase is all about bluffing - sure, your opponents know you have the highest property, and you know they know that, so will they go low to save their good cards, or go high, hoping that you try to take the big money with a mid-grade card? For a game with really easy rules that takes like 20 minutes to play, there's a surprising amount of interaction and tricky play. That makes it a pretty decent game in my book.

I cannot condone the underhanded trickery of which Stefan Dorra seems fond, but if you can separate the foulness of his lies from the brilliance of his game, For Sale might actually be a pretty good purchase. It's not too deep, but it's certainly not shallow, and it can be downright enjoyable as a quick game you pull out when company is over.

For Sale is fun and light, even if it is full of the devil's lies. You can get one here:
http://www.eaglegames.net/ProductDetails.asp?ProductCode=GRY007
Posted by Matt Drake at 9:31 PM