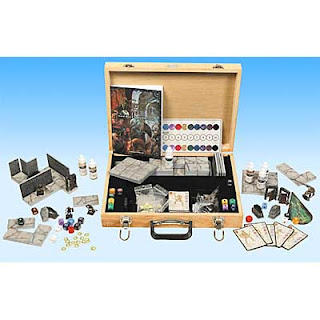 For reasons that are not particularly important, I am really pissed off right now. I was going to review Yetisburg, but I suddenly feel an urge to find a game I hate and tear it a new asshole. Luckily, I haven't sold my copy of Nin Gonost.

Nin Gonost had a ton of promise. It comes in a kick-ass wooden carry case, with gorgeous wrap-around graphics. And if you look at the back of the box, you'll see even more awesome - there are a bunch of metal minis in this case, along with six tubes of paint, a brush, a beautiful rulebook, metal doors on hinges (awesome!) and sarcophagi with removable lids (even more awesome!). But the best part, the very pinnacle, the neatest thing ever and the reason I really wanted this game - the magnetic floors and walls.

These floors and walls can be arranged to make really cool dungeons, really fast. The walls stick right on the edges of the floor panels, and you can really whip up some awesome stuff in a hurry. I can't wait to start abusing this game, but before I do, I have to tell you that the magnetic walls and floors in Nin Gonost are wicked awesome.

But that's it. That's the extent of the awesome, and now I get to open up a can of whoop-ass on the worst miniatures game I have ever played. And I'm going to start with the miniatures.

There's a knight standing so rigid that he looks like he's got a steel rod shoved up his ass. His pose is so bad that he looks like he's the team mascot posing for a yearbook shot - only his legs are so damned skinny that I'm pretty sure he would collapse under the weight of his costume. There are orcs, most of which have no noses. That isn't to say they've got some cool nose thing going, I mean they look like the noses got mashed into their faces when the sculptor was molding them. There's an archer walking forward, but he looks so wooden we called him Pinocchio when we played. And the piece de resistance is the geeky nerd lackey, who carries a lantern and a water bottle and a really small mace. All the armored knights and elf archers probably give him wedgies.

I will concede that some of the minis are actually pretty cool, and there is a really cool troll with a long trident and a spiked helmet, but I think I remember that the troll came in a different set, only I can't check any more because the gaming gods have been merciful, and the publishers of Nin Gonost are no longer with us. Thank you, gaming gods.

I'm still building up to the rules, because they deserve special attention for sucking, but before I break loose the floodgates of disgust, I'll pause at the paints that came in the box. There are six tubes of special Adikolor paints, in silver, black, white, brown, green and what I can only assume was supposed to be yak-puke yellow. These paints are some of the worst I've ever used. They are watery, requiring multiple coats to cover even primered figures, and the colors are awful. I just don't know how many miniatures I'll ever want to dab with spots of plague. Especially when that plague paint is more watery than light beer.

OK, I'm feeling good now. I'm warmed up. I think I'm ready to skewer what has to be the most cumbersome, needlessly complicated, totally worthless miniatures rules set I've ever played. Prepare to learn about... the dice.

Holy murder of crows, Batman, there are a lot of dice in this box. You need 25 dice to play Nin Gonost - and each one is different, so you better not lose one under the stove. Descent might have a big pile of dice, but when I play Descent, I don't need a visual organizer to keep them straight. The designers of Nin Gonost even knew they had too many dice - the organizer is in the box. Before you play, you're supposed to lay out all the dice on this sheet of cardstock the size of a junkmail postcard, so that you can tell at a glance which is the dark yellow shooting die and which is the bright green melee die and which is the crystal-clear fate die. I shudder to imagine how much Adiken spent to have 25 different custom dice made for every game. No wonder they're out of business. I mean, aside from making a crappy game.

The system has to have 25 dice because when you get a modifier to your roll, you don't add to the result - you roll a different die. Let's say you're attacking from behind - you get a bonus, so you find another die. Or you're shooting from long range - you get a penalty, so you find another die. This process is more incredibly tedious than hand-sorting a bowl full of cat kibbles. No, it doesn't take long to find the next die - but why not just let me add the bonus to the die roll? That would work! There's no need to make me swap out dice like Imelda Marcos at a shoe discounter. It's stupid.

Then you've got the maneuvering rules. The maps are so narrow that you rarely have many options when it comes to moving, and you can't scoot around people, so it basically comes down to standing in front of your enemies and hacking at them until one of them falls down. You roll for initiative, but it winds up being mostly stupid, because except for shooting (which doesn't happen a lot), combats are simultaneous. In other words, if you attack the same guy three times, you could lose three guys on your own turn. It's lame.

The basic rules are even worse, because in these rules, you don't wound your foes. You either kill them or you don't. That seems needlessly stupid, because you're only going to be putting like four or five guys on each side, so it's not like you're going to be hard-pressed to track wounds. It also means that there's not much point in throwing a horde of small guys at a big guy, hoping to whittle him down, because unless one of those little bastards gets really lucky, they're all just going to wind up trying to breath out their foreheads.

You should probably know that when I started writing this review, I was really, really angry. I picked Nin Gonost to review because I know it sucks, but I definitely added a little more vitriole than was strictly necessary. Not that I think I lied anywhere in here, but it might be less of a puddle of suck than I've made it sound. Not by much, mind you - it is the worst minis game I ever played - but it's only fair that I suggest you take this review with a grain of salt.

I have to say, I feel a lot better now. Thank, Nin Gonost, and thank you, patient readers.

Pros:
Lots of miniatures. Some are even cool.
Totally kick-ass magnetic walls and floors
Really awesome doors and coffins
Sweet art and a super-neat carrying case

Cons:
Lots of crappy minis
Piss-poor paints
Asinine dice system that could have been replaced with three dice and a little easy math
Crappy combat system all around

Maybe in the future, instead of reviewing when I'm angry, I'll just buy one of these:
http://www.alibaba.com/manufacturer/13300406/Sell_Punching_Bag/showimg.html
Posted by Matt Drake at 6:22 PM

It sounds like a great game to own anyways, the box sounds really cool, the dungeon amazing, to bad the rest sucks.
What other games can you use the walls for?