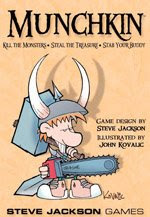 The tricky thing about writing a review of a humorous game is balancing my own jokes with the jokes in the game. On the one hand, half my job is done for me - when I can discuss magic items like the Kneepads of Allure, the jokes write themselves. On the other hand, it's a little tough to come up with new funny crap when I'm trying to compete with a monster known as the Large Angry Chicken. I mean, whoever wrote Munchkin was a step ahead of me the whole time. Curse you, Steve Jackson!

Added to the difficulty of mining a comic game for new jokes is the fact that Munchkin has been around a long time, and there are an awful lot of gamers for whom a joke about the Potion of Halitosis is already old news. It's almost to the point where I'm going to have to pull an Amy Winehouse and get drunk on stage just to impress the audience (incidentally, does anyone else find it wonderfully ironic that her last name is Winehouse? Boy, I'm hard up for jokes when I make one that's been rolling around since she sang about not going to rehab again. Curse you again, Steve Jackson!).

But you know what? I don't care. I'm going to write about Munchkin, and if you don't like it, you can go soak your head. Because it's fun, and it's funny, and besides, I got a review copy. I'm basically morally obligated to write about it. Especially if I ever want to get a copy of Munchkin Quest. And I totally do.

Munchkin is sort of a recreation of a dungeon crawling RPG. If you've ever played D&D, you'll recognize lots of the stuff in here - you can be a hot female half-elf cleric/thief on a quest for treasure and ultimate power, which is pretty much the same thing as playing D&D, but since you can finish Munchkin in an hour or less, it takes a lot less time, and requires a great deal less pretending to be a dissafected Saxon with a horrible accent and a dark past that may or may not include murdered parents. You run around a dungeon trying to pick up magic crap that will make you more bad-ass (the Bad-Ass Bandana, for example). To get to the magic crap, you kill monsters and steal their stuff. So that's pretty much D&D in a nutshell, but funnier and you don't have to shop for costumes.

Every time it's your turn, you'll kick down a door and explore the room beyond. What this really means is you draw a door card, which tells you what you find in the room. You might find a character class that lets you turn into a warrior. You might find a race card that lets you become a halfling. You might hit a curse that makes your pants fall off, or you might find the Chicken on Your Head curse (mighty inconvenient, I must say). But more likely, you'll find a monster and have to run away or fight with it.

It's pretty easy to tell if you should run away or not, because fighting is just a matter of comparing your level with bonuses to the level of the monster. If you win, you draw treasure cards and get a level. If you lose, you die, and then you have to be resurrected, and in the meantime, someone else gets to steal your crap. So that sucks, and so you may want to run away - but this does require a die roll, and if you don't roll high enough, you might lose levels or treasure or maybe even die. Like if you're fighting the dreaded Insurance Salesman and don't escape, you buy insurance.

The monsters you'll meet are almost uniformly goofy. You might fight the dreaded Pukachu, which vomits all over you if you can't run away fast enough. You might meet Bigfoot, which really is just a big foot. And maybe you'll get lucky and just wind up matching your blade against a Potted Plant, which is (possibly unsurprisingly) not a very tough monster, all things considered. If you beat a monster, you get to draw treasure cards, and you get a level. Since you need to be level 10 to win, you'll probably want to fight a lot.

Now let's say you're up against a monster you can't beat by yourself, like the Stoned Golem. He's not all that attentive - he is, after all, sucking on a water pipe in the picture - so you could just leave, but let's say you really want to try to beat him so you can steal his stuff. You can ask another player if they'll help you fight, and they can wade in with their own bonuses. Of course, you'll have to bribe them by giving them your stuff or letting them pick the best loot. And even worse, just because you didn't invite someone to help doesn't mean they can't pitch in. So if you ask the sex-changed dwarf mage to help, and the elf cleric doesn't want you to succeed, he might just bribe the cross-gender dwarf to take a break and go inject more hormones instead.

Bribing people to blow you off is only one way that your friends can screw you. An opponent might play a Nasty-Tasting Sports Drink on the monster, making him harder to beat, or he might throw down cards to make the Gelatinous Octahedron turn into an Ancient and Humongous Gelatinous Octahedron with an identical Mate. In this case, you may want to stab your friend in the face with a tuning fork, since he has almost certainly doomed you to having to throw away all your big items, like the powerful Huge Rock.

Munchkin can be a slightly arbitrary game, where you could lose because one guy pulls all the easy monsters and phat lewt and you wind up facing the Plutonium Dragon and the Unspeakably Awful Indescribable Horror and getting treasures like the Really Impressive Title and the Tuba of Charm. But it's also a riot, and the more players you have, the better it gets, as you curse your foes with the Duck of Doom right before you ask them to help you beat the Floating Nose, then steal back all the treasures you gave them for saving your butt. Turns move very quickly, so there's virtually no downtime, and most of the time you have the option to be involved in the other players' turns, either by playing cards to hurt them or offering your services as an assistant exterminator (and sometimes doing both).

I could go on and on about the silly and amusing cards in the game, or I could describe the nuts and bolts of game play a little more, but that's not going to tell you if you should buy Munchkin. Instead, I'll just say that as an old-school D&D nerd and a fan of games where I get to hose my kids, I liked Munchkin an awful lot. And considering what a mainstay of gaming it has been for the last six or seven years, I'm not the only one.

Pros:
Plays really fast
Lots of very funny jokes, many of which will be even funnier if you ever played fantasy RPGs
Nearly limitless opportunities to cause your friends misery
Great art by John Kovalic

Cons:
Limited opportunities for long-range planning or careful game play
Brown cards with brown art - not colorful at all (yeah, that's a stupid, picky con. I admit that.)

If you like fast-paced card games without too much intellectual depth and opportunities to make your friends hate you, you probably should go buy Munchkin right now. You can get one here:
http://www.sjgames.com/munchkin/game/
Posted by Matt Drake at 9:43 PM

IF you and your friends are frequently arguing over board games do not, i repeat, do not try this one.

The rules have a lot of blind spots, and every game is going to end with everyone arguing with each other.

It is a fun game, but not for everyone. The rules need to be more specific.