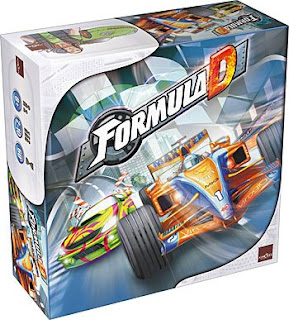 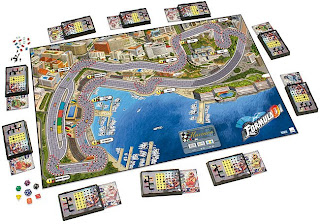 I'm not usually a fan of racing games unless they're video games. It's my personal opinion that racing is the kind of thing that should be done with lightning reflexes, not careful consideration and planning. Racing is all about going hell-bent for leather, screaming through turns like your ass was on fire and your balls were catching. Card games and board games about racing don't generally leave you feeling like you're behind the wheel of a powerful vehicle with the pedal to the floor and a white-knuckle grip on the wheel. Usually, if they do make you think you're racing, they feel like you're geriatric oldtimers with portable oxygen tubes doddering around a mall parking lot in battery-powered wheelchairs.

But Formula D is different. When I play this gorgeous new game from Asmodee US, I can almost hear the grinding gears, the revving motors, and the squealing tires. I can almost smell the burnt rubber. When you throw your transmission from fifth to third to make sure you don't overshoot a turn and wind up parked upside down in a hotel lobby full of vacationing tourists, you can really feel the inertia slam you against your safety belt and hear the engine scream (you'll have to add your own sound effects, though. Try red-lining the RPM meter in your mom's minivan and then popping the clutch. Just don't tell your mom I told you to do that).

This is all managed by a pretty darn brilliant gear system and a three-lane race track. Cars have six gears, corresponding to one of six dice you roll for movement. In first gear, you roll the die that lets you move one or two spaces; by sixth gear you're rolling a die the size of a huge shooter marble that might send you hurtling forward 30 spaces at a time. And these dice are unique to the game - the 12-sided die for fourth gear will only roll 7-12, for instance, so you always have a range of possible movement depending on your choice of gears.

The reason Formula D isn't just Candyland with little plastic cars is the turns. Each turn has a rating - a shallow turn will have a 1, and a really tricky series of cutbacks will have a 3. This is the number of times you must stop within the borders of that turn to avoid shredding your tires to confetti and leaving you running the race on dented rims. Shooting through a turn too fast will cause damage to your car, so you have to downshift to try to make sure you don't rip off your tires. In fact, the trickier turns don't just wear out your tires if you overshoot - they flip your car, sending you flying over the guard rail and through a crowd of onlookers before running around like Ricky Bobby screaming, 'Help me, Baby Jesus! Help me, Tom Cruise!'

And turns are wicked fast, as they should be in a racing game. You choose your gear, you roll the die, you move, and then the next driver goes. And yet there are still lots of important decisions to make with every move - do you downshift to make sure you don't blow out a tire on this shallow curve, or try to keep momentum to be in a high gear going into the long straightaway? Do you hug the inside of the curve to get through in a hurry, or do you drift to the outside because you're trying to bleed off some speed without having to smoke your brake pads? It wouldn't seem like there's much to do, but when you're trying to decide if you can risk throwing it into fourth or if you really need to downshift to keep from flipping your car like a stack of flapjacks, those decisions seem pretty important. Where you put your car can be important, too - if you don't set up for the turns, you might wind up ahead of everyone else with one tire hanging on by a shred of chewing gum, or you might just drive safe through the turn and enjoy the sweet aroma of everyone else's exhaust fumes.

One thing that really helps this game come to life is the incredible quality of the pieces. The board is huge - like four feet by two feet - and the cars are awesome. They could have let you play this game with cardboard counters for cars, but instead you get a baggie chock-full of little painted plastic cars (do yourself a favor and try to find the promo car - it's a little yellow Porsche. It's awesome). The dashboard you use to keep track of what gear you're in could have been a sheet of paper with one of those glass beads that game companies like to pretend are game components, but that are really just crap you use to decorate a fishbowl - but instead you get a die-cut gear box with a little plastic lever. I can't imagine how the components for this game could have been any better.

The rules are awesome, too, with plenty of pictures to explain things if you're a little slow on the uptake. For the uninitiated, this is a reprint (with improvements) of the original Formula De, and in fact is so similar that you can use all the tracks for the old game when you're playing the new one. But the new version adds more stuff, including an incredibly awesome set of optional street racing rules. Now you're not just driving Formula 1 cars around a predetermined track with pit stops to change your tires. Now you're flying through city streets in illegal hot rods, firing off nitrous oxide while irritated citizens shoot at your from their apartment buildings. You get to speed past the police station, with points going to the player who goes the fastest. And even better, each car is unique - one driver might be really good at controlling his car through the turns, while another just gets mad at his stereo and pitches it through the windshield of one of his opponents. One street racer is just a pretty girl, and every time someone else passes her, they have to slow down to stare.

Formula D is easily the most fun I've ever had with a racing game. I'm sitting here typing this and wishing I could go play it right now. It reminds me a little of those old Hanna Barbera cartoons where teams of cartoon racers would try to sabotage each other in long races, and Scooby Doo would be driving while Shaggy held the car together with his hands and his feet, and Grape Ape would be driving a ridiculously small car with his toes, and that creepy little dog would be giggling like a hyena while he threw smoke bombs out the sun roof. I get a wild look in my eye going into a scary turn, and my kids go, 'no, Dad! You'll crash!' and then I upshift and yell, 'Rooby Rooby Rooo!' and roll the die - and my car flies off the track to crash into a sailboat in the bay, and my kids laugh until they pee themselves.

Pros:
Gorgeous reprint that adds a whole lot to the original
Magnificent components
Really exciting - you want to do a victory lap when it's over
Great options for team play and tournaments and lots more kick-ass stuff
Just an incredible amount of fun

Cons:
May be habit-forming
Is costing me sleep

I've read every last one of your entries on here since the beginning. I had to do a little catch up when I started back in school, but I've read them all.

This is one of the funniest, most entertaining reviews you've ever written. Like Formula D, you floored it into the turn, only you didn't do a fiery tail lights over head lights spin of death and pulled through.

Great stuff and from what it sounds like, a really great game.

Now if you'll excuse me, I need to go beg for change on the street corner so I can buy the game.

Great post on Formula D and good review. I've heard a ton of good things about the game and I'm looking forward to getting a crack at it myself.

I've also heard great things about Bolide - have you ever tried that one?

Great review. You've convinced me to buy it for a friend's birthday! Maybe we'll even start a league.

Nice review! I received my copy of Formula D about a week ago. So far we are having a blast pushing our tiny cars around Monte Carlo!
:)

For a fast racing game, try Das Motorsportspiel - your move has to be completed in 30 seconds (or us, we've cut it to 20 seconds). start timer, grab dice, manipulate dice, move car - no take back movement, car goes forward or diagonally ONLY!

Of course, you can implement a timer to any race game, and the same forward only rule.