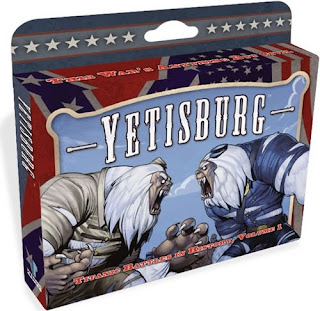 Looking back at this week's reviews (and the one I'm about to write), it seems this is a weak game week. Quest of the Dragonlords was fun, but sloppy and unbalanced. Nin Gonost is pretty, but a horrible, near-unplayable travesty. And then there's Yetisburg, which I enjoyed thoroughly, and my son refused to touch it again.

In case you couldn't tell from the title, Yetisburg is tongue-in-cheek and a little silly. The basic premise is that yetis arrive at some point during the Civil War, and both sides now use these unpredictable psychopathic monsters as shock troops. Which makes lots of sense, because if you found an entire army of prehistoric cryptids, your first action would almost certainly be to put them in a blue uniform and give them a tiny little cap. It most certainly would not be to run like hell, because that would make you something other than a reckless idiot (not that you are a reckless idiot - well, you might be, but I'm not exactly on a first-name basis with everyone who reads this, and so it's entirely possible that you might, in fact, be a reckless idiot. I'm just saying I don't know, and would hate to call you names without knowing I was right. Of course, if I knew I was right, I would totally call you a reckless idiot, as long as I thought it was funny. And as long as you didn't know where I lived).

The theme here is next-phase new-wave dance-craze awesome. It's funnier than those pictures of guys with no eyebrows and profanities written on their foreheads in permanent ink because they passed out after drinking too much cheap tequila, just to wake up duct-taped to a wall and wearing only a tube sock and poorly-applied lipstick. And that's saying something, because that's pretty funny stuff. There's a letter at the beginning of the rule book where this poor soldier is writing his girl back home, and he expresses his sorrow at never being able to hold her in his arms again - because the yetis ripped off his arms. The rulebook closes with a reimagined version of Dixie where the chorus goes, 'Run away, run away, run away, from the yeti.' This is prime comedy gold, and it's followed up by exploding mastodons and troops so clumsy that they hit their own guys almost as often as they hit the enemy. It's funny and engaging and fun.

The wrinkle, however, is that it's horribly random. The battle is laid out in two rows of cards for each side, and then when you attack, you flip these little cardboard counters with meat on one side and numbers on the other, and that counter tells you where your shot hits. Hit one of your pathetic infantrymen, and he's dead. Hit a yeti, and he'll be pissed. Hit a wooly mammoth a few times, and he'll explode in a shower of high-grade prime rib.

So you're never really sure you're going to hit the enemy when you fire - half the shots end up sailing off the battlefield, if they don't hit your own soldiers - and to make matters worse, it can be difficult to keep your guys ready to go to work. Every time you attack, you attack with all the troops of a particular type that are ready, and then they all start wheezing and have to lie down and you can't get them to get back to their day jobs until the end of the turn, or if they get shot. This may seem odd - getting shot makes you ready to attack again - but if you got stabbed while you're taking a nap, wouldn't you wake up? So you don't want to miss an opportunity to attack, but at the same time, you might not want to fire with the troops in back, as they're likely to hit the guys out front.

And adding just one more layer of random, you can only attack with a particular kind of troop if you've got a matching card in your hand. We had a few rounds where we actually tried to attack with guys who couldn't attack, just so we could throw out the card and get a new one. If all you've got on the field are sleepy mastodons and cavalry, and the only cards you've got in your hand are yetis and infantry, you get to stand there looking like you forgot your Alzheimer's medication. It can be frustating to try to get the cards you need to attack, especially beacuse every extra card you have to draw puts you one card closer to losing the game.

There is a really clever command mechanic that does a good job of lessening the affects of all that randomosity. At the end of every turn, your officers can try to rally the troops. They might maneuver to get the angry yeti out of the back line and into the trench where he can eat the guys on the other side. They might holler at the lazy troops to make them ready to fire again. They can even return from the discard pile, replace a soldier you don't really need, and then swap out on the next run for a yeti.

So there's a whole lot of chaos in Yetisburg, and it might feel like you're a little out of control, but it is unquestionably fun. The random hilarity manages to keep you completely attentive, and yet you don't have to feel too bad about getting stomped. The art on the cards is completely brilliant. The little meat counters you use to indicate wounds are also totally bitchin'. Everything is very, very well done, and the only way you won't love playing Yetisburg is if you're a complete control freak. And if you are a complete control freak, you're probably playing Ra for the hundredth time and turning your nose up at a game where yetis punch wooly mammoths until they explode.

I have to hand it to Paizo - I haven't found a game from them that I don't like. Key Largo, Kill Doctor Lucky and now Yetisburg have all been a blast. They're incredibly fun games. So there are some problems with Yetisburg that might offend the gaming purists, but I have to tell you something about those purists - they spend all their time calculating the most efficient way to organize the toilet paper tubes. They're not much fun. You should get Yetisburg, a couple beers and a buddy. You'll have a blast.

Cons:
The level of chaos could threaten a gambler's sanity

If you like games with great themes and lots of casualties, you should get Yetisburg:
http://paizo.com/titanicGames/v5748btpy81x6
Posted by Matt Drake at 9:43 PM

Great review, Matt. I'd comment more but just received a shipment of the expansion toilet paper tubes that require organizing!