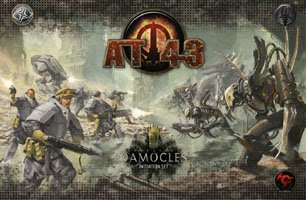 My recent review of Mutant Chronicles CMG started with a hypothetical, and one that is worth revisiting for the sake of this review. See, Mutant Chronicles is a huge disappointment, like finding out that the woman who just offered to chrome-plate your trailer hitch has man junk. AT-43 is also a pre-painted minis game, though the starter is significantly more expensive, and just like with Mutant Chronicles, the anticipation of the game could start off with as much promise as a bar full of Girls Gone Wild.

The sci-fi theme of AT-43 is really cool. There are walking tanks, creepy skeletal aliens with sonic guns, armored troopers and laser rifles. This is gritty, hardcore, exciting space fighting, and to continue our analogy, the theme makes the game compare easily to a busty college co-ed who has been drinking wine coolers for the last three hours at a house party just off campus.

Then you find out the game is pre-painted miniatures, and you see the magnificent sculpts and the flat-out gorgeous paint jobs, and suddenly you start to find out that this co-ed has a really cute best friend who likes to party. And the box comes with a whole bunch of awesome pre-painted terrain, and it's all in standard miniatures scale, and now these two crazy college girls are about to prove to you - right there in the bar - that they're not sporting any man gear.

So the only way to find out if this game is actually as good as a threesome with a couple nubile college hotties is to get it back to the apartment and play. You're certain that they're not dudes - you've seen the miniatures, and they're the most attractive pre-painted minis on the market, with the possible exception of Confrontation (which, to make a total side analogy, is like a rich heiress - she might have a lot going on, but won't even look at you if you're not driving a Ferrari). The terrain is awesome - you can even open the doors on the cargo container and hide a squad inside to stage an ambush. The only thing that could spoil this party is if the rules suck (or if the girls sober up too soon).

The rules are not particularly complicated. They're pretty straight-forward, as they are for most miniatures games. The scenarios in the starter set (Operation Damocles) start with basic movement rules and add new rules as you play, so that by the time you play the final scenario, you've seen how everything works. It does a great job of teaching while you play, and the rules are fun and easy to learn. This is the dream scenario you read about in Hustler - the girls are ready to go and more willing than you had hoped.

And then one of the girls falls asleep. The squad cohesion rules hurt the game the way too many jello shots will make your three-way into a one-on-one. The lack of individual movement and the required clumping of soldiers combines with the overpowering might of the oversized squad to hurt - but not ruin - what started out with lots more promise.

The figures in a squad have to stay too close together, so it's tough to perform a flanking maneuver with a single squad. Since every figure in a squad fires at the same time, a larger squad is far more deadly than smaller squads, even if the smaller squads have more figures. But you know what? That second girl is still wide awake, and once she gets her roommate to bed, she's still more than willing to show you why she bought a fold-out sofa.

The squad rules hurt the game, sure, and there are a couple other smaller factors that can make some experienced players frown a little (like a complete lack of morale rules), but this is still a very fun game. You may not have scored the Letters to Penthouse threesome, but you'll still have a real good time. The only reason you would be disappointed in Operation Damocles is if you set your sights too high. Every game has flaws, but AT-43 suffers from fewer flaws than many games and is the most attractive sci-fi pre-paint on the market. It's priced reasonably and comes with everything you need to play, including a tape measure and lots of reference cards.

So to close out, AT-43: Operation Damocles does not disappoint. There are no man parts on this game. It may not turn into the wild night you thought it was when you brought it home, but it's a damned sight better than coming home to an empty apartment.

Cons:
Squad rules can hurt the game
A few minor problems that keep this from dialing up to 11

Eighty bucks might seem like a lot for a starter set, but when you consider how much is in the box, it's actually a pretty good deal. Go here to take a set back to your apartment:
http://store.fantasyflightgames.com/at-43operationdamoclesinitiationset.aspx
Posted by Matt Drake at 10:16 AM

The funny analogy really is your forte. The game sounds like something I'd like right up until you said "tape measure". That's a big minus for me, I know that it's supposed to help with the realism of the game, but I've never been a big fan of games that don't have movement rules built in.

I agree. I wish there were an easy way to duplicate a tape with a hex grid. But then, grids of any sort are fairly limiting when it comes to using terrain, and the eye candy is the best part. I don't want to make a ruined building, put rubble in the corners and moss on the walls and cracks in the walls and sand on the ground, and then mark it all off with hexes.

Every minis game (almost - HeroScape) has measuring for movement and LOS. I agree about the ridiculous unit movement rules. If I owned this game I would just ignore it. Seriously, do these people have no radios? This rule is what turned me off of 40K. Why do these guys have to run around so close together? If you want to encourage that, just give a bonus if everyone in the squad is X inches from the leader...

I don't mind squad coherency since it's a simple way to show how units work in a combat situation. W40k is much more lenient especially in the 5th Ed where you can measure from base to base or base to head if using multiple levels such as a building. AT-43's coherency is 25 cm (close to 1 inch) and is very rigid. AT-43 has great figures, background and terrain but suffers from rule issues. I still like the game but really hope that FFG/Rackham produce a 2nd edition that cleans up the rules. The figures are great to use in other games though! I've built SuperSystem stats for some Karman units to use them as futuristic invaders summoned by Kang the Conqueror.

the meaning of names