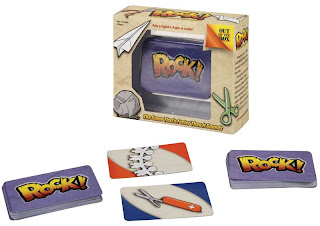 I've been thinking about this all day, and discussed it with my wife, and I'm scrapping the review that was here. Edgy is funny, but the danger with edgy humor is that it's not hard to cross a line. I think yesterday's review was freaking hilarious, but it was also more inappropriate than even I should run. I prefer humor like Dave Barry; yesterday was a little too Dice Clay. And not sex jokes Dice Clay, but the jokes he tells that make you wish he would fall into something with sharp points.

So here's a quick summary of Rock! - it's too simple. Each card has either rock, scissors or paper, and you play your cards at the same time, and the person who calls out the winning card wins that pair of cards. After about two minutes, you're both out of cards, and you count up. The winner is the one with more cards.

This is not a fun game. If you have are smarter than a fifth grader, you'll be bored to tears before you finish the game - and that's saying something, because it takes two minutes to play.

So that's it. Short review, no links, just an apology for going too far with the original review, and a quick summation of a poor game that has no business being made.

Oh, and since the comments weren't even remotely relevant any more, I removed those, too.

I've deleted posts for the same reason. Happens to the best of us.

I think you may be missing the point; or, I'm getting creative as to the point.

Very few people play RPS for the fun, with the exception of those who go to tournaments. RPS is a selection game, which you play simply in order to decide who wins a tie or who gets to pick starting player.

If Rock is really targeted at being a "fun game", then sure, it looks stupid. But if it's targeted at being a selection game, which is played merely to decide who goes first, it has its points: it's slightly less lucky, and is going to favor the person with greater pattern recognition skills.

Having not played the game (ahem), it might be that this is as easy as it looks, in which case you may as well be flipping the same three cards over and over. But I imagined that the different pictures are supposed to make the automatic recognition more difficult. Your review seems to indicate otherwise.

That's one. Now from an entirely different perspective, would this game be at least a slightly beter version of War for kids who are going to play War anyway? It seems, at least, to enhance pattern recognition skills. There actually is a game RPS in card format which doesn't involve any skills. You just flip cards and whomever wins wins. This seems like a step above that, at least.

I can't imagine a scenario in which anyone I know would want to play this game. The different pictures really don't make it any more difficult - you see the paper airplane, you see the Greek pillar, you say, 'paper.' Of course, my kids are in junior high, not second grade. Maybe the game would play better to a 6-year-old, but I don't know any 6-year-olds, much to my delight.

As far as picking something, I would still just flip a coin.