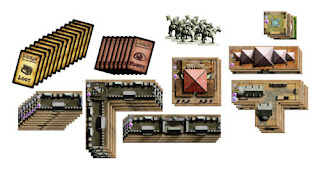 Violent games are my personal favorite. I'm a red-blooded American male, so I like games where I get to kill people. And in Battue (originally reviewed HERE), you get to kill a lot of people, because you're in charge of an army of horse-riding barbarians sacking a perfectly civilized city. That's a Jerry Maguire moment right there - 'you had me at barbarians.' And I even hate that stupid, overused line, so you know I must like the game to stoop to using a bad movie-line cliché.

And if there's a way to make an awesome and violent game more violent and awesome, you know I'm a sucker for it. Battue: Walls of Tarsos is the second release from Red Juggernaut, and it takes the original game of Battue and turns it up to 11 (another overused movie cliché. Sorry). Now there is more violence, more mayhem, and more cool stuff to completely wreck in the rich city of Battue.

For starters, the expansion has these wall tiles. These sit on top of the walls that are printed on the board, and replace the values that were there. If you attack at a gate, you've got a good shot of getting in, and if you start at a tower, you're probably going to get to see some violence when all your guys get killed and you're out of the game on the first turn (not a great way to start, by the way). If you can eventually take a tower, though, they have great special abilities that will really help you. So don't start there, but get there sooner or later. You'll have to shed some blood to get what you want, but then, if you're squeamish, go play Tiddlywinks or something and let the grown-ups get some gore under their fingernails.

The new event cards add a lot more blood and guts, especially because some of them create a new horde on the board. This horde is controlled by the opponent who draws the card (well, mostly controlled - they have an ugly tendency to get out of hand and hit anyone who happens to be close, which is a kind of like my idiot little brother). And if they sweep in behind you, they can really ruin your day. I know, because it happened to me, and I wound up walking with a limp for the rest of the game (you know, because I got kicked in the nuts).

The new loot cards are cool, too. There's a new kind of loot card, the reaction, that lets you do something about the mayhem that gets tossed in your lap when someone else decides it's your turn in the barrel (like, say, if a horde of uncontrolled horsemen gallops through your back yard and then kicks you in the nuts). Plus there are some cards that give you a bonus when you complete a quest, usually occupying a particular building. These cards don't add much more violence, but they do add more variety, so I'm all for them.

And of course, the Battue expansion would have been worthless without new building tiles. My favorite thing about Battue is the way you can build this big, beautiful city and then discover it one piece at a time, and new buildings means new stuff for me to discover. And happily for those of us who also want to see some scrapes and bruises, these new tiles are real ass-kickers. A bunch of them are apparently rigged with booby-traps, because as soon as you flip them over you lose a warrior. Then they'll be really tough to beat, so you end up losing even more warriors, especially because you're not so tough after losing that first guy. Now that's my kind of violence - complete eradication on the whim of a die roll.

All this new violence comes at a price, though (I mean, a price beyond those who have to die to entertain me). The original game of Battue was heavy on the luck - if you wound up bashing your head against really tough buildings before you got going, you could wind up watching the game go by as you kept recruiting new allies instead of killing someone. And the combat was just a single die roll, which could easily go south for you and end up costing you, big-time.

Walls of Tarsos keeps that luck factor high, and since so many of the new buildings can so radically change the game, actually jacks it up even higher. If you were irritated with the luck before, you'll really hate it now. One game we played ended with a final score of seven, four, twelve and fifty. Yeah, the winner beat all the rest of us put together. And even he was the first to admit that it was all luck.

But you know what? I still had a blast. I don't care if it does all come down to luck, Battue is still one hell of a fun game, and Walls of Tarsos makes it even better. More violence, more mayhem, more chaos, and more fun. And if that's not a reason to get the expansion, I don't want to know what is.

Pros:
Lots of new toys for your toybox
Great new buildings
Cool new cards
Even more violence than before

Cons:
Luck can play a really huge factor
New tiles don't match the old ones, so you know when you're about to raid an expansion tile

If you play Battue even now and then, you should really check out this expansion. It's a blast, and you can get it here:
http://www.thoughthammer.com/battue-walls-of-tarsos-p-5219.html
Posted by Matt Drake at 8:41 PM

Havn't got the original game yet, and now I want the expansion also. Hey you have an idiot brother also, cool!