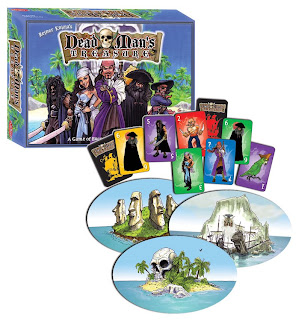 It's been a while since I took some cheap shots at Reiner Knizia, my least favorite game designer. It's also been a little while since I said mean things about a game I didn't like, so today will be more about the cathartic experience of bashing something that doesn't deserve my ire than it will be about educating the masses.

Reiner Knizia is a mathematician (and incidentally, mathematician is kind of a pain in the ass to type, which makes it odd that I decided to type it twice). He makes games about math, because that's what he does. He must be fun at parties - you can almost picture the event:

Jerry Seinfeld (surrounded by people laughing uproariously): So why he decided to put a sock in his pants, I'll never know!

Reiner: I once counted all my socks and determined that I have three times as many red socks as plaid socks.

(dead silence and blank stares, before everyone turns back to Seinfeld)

Reiner: I have to pay for sex.

So Dead Man's Treasure, being a Reiner game, is all about math. Happily, it's just adding this time - God knows how many times I've had to do multiplication in my head to play a Reiner game. I guess he's getting soft, because in this one, you just have to put down numbered cards and then add them together.

There are six islands in Dead Man's Treasure, and each island has several treasure chests with numbers on them. The chest with the 7 is better than the chest with the 3 - it's not tough math. Just some adding. And if there were more to the game than putting down cards and then adding, it might be interesting.

You've also got Ben Gunn, who is a moving 10-point treasure, and Captain Flint, who makes all the treasure dry up like the joy at a Reiner dinner party. These guys move around the islands when you put your numbered cards at their islands, so there's some strategy in placing a card just to get them to hop around a little.

You've got eight pirates card, numbered 1 to 7, plus a cannon. Mostly these just improve your position at a particular island, except for the cannon, which kills people. Normally this would suck - killing people, I mean - except that killing people make the math easier. You put down these cards, try to kill your opponents with cannons, try to move Gunn and Flint, and try to steal the most treasure chests.

So I've got two reasons why I won't ever play this game again. First, it's freaking boring. It takes about 15 minutes, during which you're just putting down numbered cards, and then you do math. If you don't like doing math, you should not play Reiner games anyway, and this game shows why. Boring math. Not my favorite.

Second, the theme is like nearly any other Reiner game. I think he has a stock pile of themes that he puts on a deck of playing cards, and then draws one at random. This didn't have to be pirates. It could have been all about bunnies chasing carrots, and instead of Captain Flint, it would have a farmer, and instead of the cannon, it would have a crackhead with a shotgun. Hell, it could have done without the theme completely and just been honest. I can respect a game that would come right out and say, 'Hey! I'm a boring math game!' I wouldn't play it, but at least I wouldn't be disappointed when the whole thing is an exercise in adding. If I want practice adding, I'll buy flash cards.

I know lots of people like Reiner games. That's OK - no reason you have to agree with me. But if you like games where something happens (anything at all), you're not going to be a great big Reiner fan. If you're able to enjoy math exercises masquerading as games, Reiner games should line your shelves. And considering the number of crappy math games he's made, you should be able to fill all your bookshelves with boring Reiner garbage.

If you think Dead Man's Treasure sounds like fun, you might consider this game, too:
http://houseofmashinchi.blogspot.com/2008/02/math-contest.html
Posted by Matt Drake at 11:29 AM

Next time you say the words "Reiner" and "Review" I have to remember to not read it at work. I was able to hold in the laughter, but it hurt.

But he can show you a three dimensional trigonometric graph which he uses to figure out the optimal price.

I believe everybody should browse on it.
here