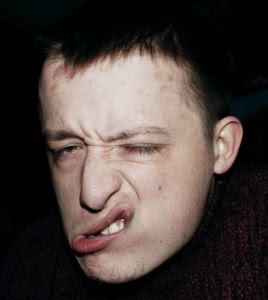 As many of you may have noticed, I often copy my reviews to boardgamegeek.com. I am a shameless attention whore, and having reviews there gets me readers here, which makes me smile. It also gets me more free games, and God knows I love free games.

One unexpected side benefit of posting my reviews at the Geek is that people respond there a lot more than they do here. Most people here are at least sort of fans, and are not that inclined to call me names. Happily, the geeks at the Geek are often delighted to hurl metaphoric feces at me for offending their finer sensibilities. I wish my ardent detractors would take the time to write me emails, but since they don't, I thought I would use this site to answer some of the more outraged respondents, the ones I call Babes in Geekland.

Our first piece of sneering disgust comes from the Geek user blindspot, who wrote a very erudite reply to my review of Darjeeling:

"I suppose it shouldn't surprise me that a reviewer on a board game site would have feelings strong enough to wrap them up in his own feelings about gender roles and sexual orientation. Does that mean you don't drink tea either? Or wear pink shirts?"

That one wasn't too bad, so let's go on to thorgn, who had a slight issue with my review of Fire & Axe, in which I joked that there were no female Viking raiders:

Although humorous, this is not actually true. A Viking named Freydis, daughter of Eric the Red, was on one of the Norse explorations of North America. They had a large battle with the natives, and she proved the turning point in the battle, turning it from defeat to victory. So although it was the norm for Vikings to be men, this was not an exclusive rule.

Allow me to offer the most sincere of fake apologies. Had I known that once, in an obscure Viking story only known to people descended from Norwegian fishermen, a female Viking did something besides fetch ale and tend babies... I still totally would have said the same thing. But my most sincere fake thanks for sucking the humor out of the gag like a fourth-grader with a 7-11 slushy.

OK, how about this angry reader. The first two might have just been looking down their noses and being proud of their ancestral heritage, but this guy was really hacked when I said that Tsuro was a game invented to occupy drunken Chinese emperors:

Ummmm... excuse me, but do you have any idea how offensive this post is?
I don't want to be a stickler for historical accuracy (especially when humor is involved)... but this just isn't funny.
This is an example of how ignorant people can be about other cultures, and how bullsh*t racial stereotypes are perpetuated.

Please leave this crap to your blog, thank you.

Thank you for taking the time out of your busy day to write this politically correct reply. I know it must be hard to work in time for replying to humorous board game reviews, especially when you've got your hands full making sure none of the other preschoolers has any fun - and even that job has to be done between washing loads of your mom's underwear.

I should point out that when I wrote that the scroll was shoved up the ass of a terra cotta soldier, I knew that wasn't true. The rest, though - reports are conflicting. The grad student may have been trying to get the clay warrior to give him a half-and-half.

Oh, and you're wrong - this was funny. The guy who made the game laughed at it. Enjoy your Bob Hope records, and leave the rest of us to have fun now and then.

But my favorite angry readers are the ones who are upset when I don't like their favorite games. The most flak I've ever received was over my review of Apples to Apples, which, in case you haven't read the review, is a stupid game. Don Eskridge wrote this pithy reply:

Simply because you can't grasp the social strategy involved doesn't make it not a game. Look at Poker or Werewolf. It's called reading people, understanding who they are, their feelings, what they want. Maybe you should get out more.

I grasped the social strategy. The game still blows. Maybe you should shut up more, or at least talk in complete sentences.

A good friend of mine named Reapersaurus was apparently less irritated with my dislike of the game, and more upset that I hadn't been friendly (you might be surprised how often that happens):

Insulting to women. I don't think it's misogynistic, but other people have been told they are for much less.

Insulting to men who don't like to play stuff where people die.

Insults them again, in case it wasn't gotten across the 1st time.

Finally, havoc10 made my day. He was incredibly angry that I didn't like his dumb game.

Why didn't you just write: "I'm a better gamer than everyone, but I didn't win, so the game must suck."?

Get over yourself, man.

So you had a better answer than someone else, and it didn't get picked. Let me guess, you might even have been needled a bit cause "Mr. Puerto Rico didn't win! BWAH HAHAHA!"

This is a game where the best gamer, or even the person who plays the game the best, is not guaranteed to win. And I think that appeals a lot to people that don't game as much as some of us here do.

I could certainly understand if you lost out in the $10,000 buy-in World Series of Apples to Apples on
Penguins=Harmful. The moral of the story is don't play A2A for large sums of money.

If you can't sit at a table of friends and family and have fun with this game, so be it, but your "I'm right and you 3 million clowns are wrong" attitude is laughable.

Apologies if you are 11 years old or younger.

I can't tell you how happy I am for your reply. I completely understand your desire to read reviews that either agree with you absolutely or offer no opinion whatsoever. However, for those of my readers whose lower intestine is capable of digesting more than unflavored oatmeal, I like to actually say how I feel about a game. I apologize in the most insincere manner possible if my opinions of your favorite stupid game have shaken your weakened digestive tract to the point that you will spend the next two days alternately filling your drawers and passing the kind of gas that could fell a mule. I suggest you avoid dairy until your colon calms down a little.

As far as 'getting over myself' - there is no chance of that happening. Do you have any idea how arrogant I have to be to write this column? If I were to suddenly become filled with humility and the desire to avoid harming the tender feelings of even the most frightened basement-dwelling cave nerd, this site would be so boring, I would retitle it The Dice Tower.

And no apologies are necessary, as I am quite a bit older than eleven.

That should do it for this little tour through the virtual mailbag. My most sincere thanks for every retard, halfwit, numbnuts dingleberry and drooling caveman who ever wrote to tell me how offended you were. I mean it - I really do love hate mail.
Posted by Matt Drake at 9:26 AM

Don't know if this is a compliment to you or not (I consider it one) but man this article gave me Seanbaby flashbacks. Laughing out loud in the office, the whole bit. :)

[copronymous raises hand] O...o!!! Pick Me! I want to be the dingleberry.

Man I can not wait until Gencon.

I found your review of reviews of your reviews to be both politically insensitive, emotionally disabled and some third thing that makes the baby Jesus cry. Not only did you offend people who were offended, but you went on to offend them repeatedly, long after your heart should have grown 3 sizes too large and burst out of your chest cavity screaming GNAHH! GYEENAAAHHH! and rushing towards the airducts where it could've blossomed forth as an acid-blooded insectoid with a severe dental problem.

You make me sick, you vomitous mound. You and your game reviews can both become lodged in the rectum of several maggot-infested giraffes in the middle of Africa on the hottest day of the century. Don't you know that your offensiveness will doom this generation, and quite possibly the next, with feelings of negativity and hostility? Don't you care, sir?

As I can see you do not. Soooo many great games will be tongue-lashed by yourself, unapologetically, with no consideration of decent and/or church-going people. Have you no shame? Have you no joy in your soul? Did that result from you listening to all those rock-n-roll records in your misspent youth?

What cruel trick of fate turned you into the Grinch of Games? Did you see your parents gunned down in the alley behind the theatre? Did your home planet blow up, leaving you an orphan? Did someone shoot your ailing dog? Did a certain counselor make summer camp... awkward?

The past is the past. Leave it behind. Embrace the cards with words on them. Enjoy the cubes that issue forth from Germany like some invading army of cockroaches. Let not you heart be troubled by complicated variations of hand-gesture-based schoolyard pasttimes. Smile. Greet every new day with a smile on your face and a boner in your soul, ready to spread the love over everyone you encounter. Including us poor, helpless retches who must endure your review site 3 days a week.

Keep up the great reviews and funny, un-pc commentary!

This line has just bumped 'Like my scrotum, here it is in a nutshell' to number two in my list of favorite things to say.

Finally got a chance to read this one Matt and once again I am in tears laughing so hard...keep up the good work.

Comedic Gold. Thanks for the laughs.