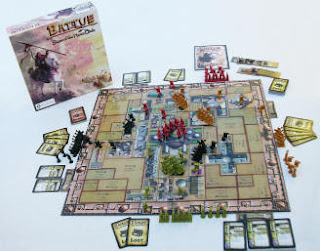 New game companies spring up all the time, and lots of them suck. Lots of them have a crappy site and two really dumb games. The worst is when they make party games, because there are like four party game ideas that work, and about 200 that don't. How many adults sit around with drinks thinking, 'you know what would make this gathering great? If we could try to guess movie titles by drawing pictures of stuff we make out of clay, and then something could make a loud noise!'

Red Juggernaut was founded by a few guys who used to work for WizKids and got sick of it. Ask Jim Long, the president of Red Juggernaut, about Clix games, and he'll tell you about how they used to destroy tons of plastic to artificially inflate rareness, or how the CMG format went from a cool idea to 'hey kid here's some candy'. So these guys know the industry, and they know what's cool.

And what's cool is having every game be based in the same fantasy world. Not like an RPG, where everything is a sourcebook, until they're reduced to doing books about character options for half-elf magic fighters with acne on their genitals, but like where one game is about sacking a city in that world, and another game is what the nobles play in the imperial court. That's cool. And what's even cooler is when those games rock your pants off.

Battue is a funny name for a game, really. It sounds like I sneezed. But I don't even care what the name is, because it's fake-language-ese for 'sweet frikkin game.' That, or it's what they call it when a bunch of horse-riding raiders descend on a poorly-defended city and rape, pillage and plunder their way to the palace.

Each player in Battue is leading his own horde of horsemen as they assault the city of Tarsos. The horse lords are all competing to get the most loot out of the razing of the city, because the best raider gets to be king of all the horsey clans. There are four different colors of horses, and you wander the city with hordes of warriors, seize locations in the city, and ransack them for treasure. There's no chance of the defenders fending off the attackers - that's never going to happen. Instead of playing out the siege, you're playing out the fun part, when you run around and steal anything that's not nailed down.

The exploration of the city is a blast, because the city is actually made up of a whole damned bunch of building tiles that look like they escaped from Tetris. These pieces start out upside down, and when you attack one, you get to find out if you just sent a half-dozen warriors into a brothel full of hot Tarsonian hookers, or if you can kiss those six guys goodbye because they're about to have the elite city guard clean a toilet with their heads.

You can tell Battue is an American game because there are tons of cards. Every time you raid a neighborhood, there's a good chance you'll draw a bunch of loot cards, and there's no max hand size. These cards can make battles go your way, they can hose your opponents, or maybe they just get you paid. And if you're really lucky, you can capture the Emperor's niece. I'm not making that up - you can do that. It's awesome.

There are event cards that can kick you in the jimmy, too, or they can be a big help. You might flip a tile just to find out that the 15th Legion was waiting for you, and they would like to find out if you can breathe through your forehead. Or maybe the card is great, and bunch of your opponent's horse warriors decide to start working for you. These cards keep the game pretty chaotic, but they sure do make it fun.

The game takes off slow, but it snowballs fast because of those loot cards. Since there's no maximum hand size, you can be holding a dozen cards going into a key fight, and use them to run roughshod over the defenders to claim a swift victory. Only your opponents probably also have a bunch of those cards, and they can stop you. In the end, the game rewards good play, but still relies heavily on luck. One bad card early on can take you out of the running, but one good card can get you back into the game.

It's not hard to tell that Red Juggernaut is a new company. They're obviously lacking some of the production experience of guys like FFG or Avalon Hill. The building tiles in Battue all have a thin gloss coating, and I had a bunch of them flake before I even played my first game. The plastic horse warriors are great sculpts, unless you look at them head-on, and then they kind of look like mules. Some of the design decisions look like they were made by an artist who specializes in package design for flashlights, not playing cards for board games. And an awful lot of the art is semi-generic computer art.

But it's not hard to overlook the production flaws with a game this fun. When you set up the board, start flipping buildings, watch your riders drop like flies, and then finally build a horde to make Genghis Khan proud, you won't care if all the art looks expensive. What really matters here is that this is one hell of a fun game.

Cons:
A little too much luck
First-game-blues production values

Battue kicks ass, and you should buy it. I hope that's not too ambiguous.
http://www.funagain.com/control/product/~product_id=017070
Posted by Matt Drake at 7:57 PM

You have made another game sound like a must have. I think it is exciting to get a game form a new company - just means we should be expecting big things from them in the future. I like how they make it all about getting the booty - sounds like a great game. I am more into dice rolling games, but this sounds like one I want to own, thanks for the heads up!

This is most certainly a must have game!! Thanks for another review Matt, and thanks for bringing Battue to our game night and introducing us to it!

OK, I made a huge mistake when I read the rules the first time - you can only have up to 6 loot cards.