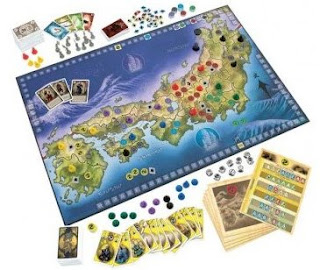 As far as I can tell from my limited research (meaning, I did no research whatsoever), Senji is a Japanese word that means 'not as complicated as it seems.' Because if you read the rules for Senji, the game of Japanese diplomacy, economics and warfare from Asmodee US, you may be a little daunted. Hell, if you play the game, you may still be a little daunted, but after a while you'll get the hang of it.

In Senji, all the players are trying to become the shogun of medieval Japan. To become shogun, they have to conquer their enemies, play tricky diplomacy games (and often screw their counterparts), and get paid. In game terms, that means they have to get 60 honor points (another definition of Senji I've discovered is 'getting 60 honor points through diplomacy, conquest and trade'. Again, that's based on no research at all).

There are three ways to get honor. First, you can kick some ass. When you beat up a foe, you kill a whole lot of soldiers, and in typical feudal Japan style, more dead soldiers means more honor. Combat isn't that tricky, but it does have some cool dice with pictures all over them. When you roll all these dice, the pictures that match your family get your more battle prowess. And to help with the honor, when you win a big fight, everybody loses a bunch of people, so you can claim honor points not just for the dead guys from the other team, but from your own pile of corpses. And the coolest part is, if someone attacks you while you're holding their family members hostage, you can totally execute them to get more honor. It's like Americans made this game!

You can also get honor by hosting the family members of your enemies, or by working out deals that give you the opportunity to look all honorable. It might do in a pinch, but this is not the best way to earn honor. Honor in diplomacy is about as effective as being compassionate in a knife fight - it might earn you points with the crowd, but you might also wind up trying to hold in your kidneys with a moist towelette.

The third way to get honor - and historically, the best way to get anything - is to make money. You can swap economics cards for honor, which is basically the same thing as trading cash for power. It's kind of like running for office - the more you spend, the better you do. Everyone knows that if you can afford to hire Carl Rove, you can be president, even if you have to fire him later for being a crooked cheating bastard.

There's a lot more to Senji than just swapping stuff or killing people for honor. The diplomacy stage of the game works great, by giving each player a handful of diplomacy cards that they can trade for favors down the road. Like you might offer up your grandma as a hostage if another player will agree to help you out in a fight later - but then you better not attack, or granny's going to buy the farm. Or you could offer trade concessions for the option to act first later in the round. The sky is the limit here - anything and everything can be bartered during the diplomacy phase, so good wheeling and dealing can take you a long ways.

Then you've got the action phase, where you put down order markers to say if you'll be recruiting soldiers, attacking your enemies, or making the land produce (which actually gets you cards, not rice, because another definition of Senji is 'get cards when you grow rice'). One player always decides the order in which these actions take place, so if that guy really wants to give you the shaft, he'll make you go last, after everyone else has had a chance to kick you in the jimmy all turn. It might be worth trading him a few cards to make him smile on you. But then, he could still totally hose you and just keep your cards, so it might be better to stab him in the pancreas and just go whenever you want.

Finally there's the trading phase, where you swap card combinations for honor, or use them to hire samurai. This part can be a little tricky, and you have to watch out for your opponents, because you can totally lose in a single turn just because of this trading phase. Some sneaky devil might sit quietly the whole game, collecting cards and not starting any fights, and then trade in a stack of cards as thick as your thumb to get like a bazillion points at once, leaving the rest of you wondering how the hell you got stuck at 47 points when he's at 128.

All things considered, Senji is complicated, but not as complicated as it seems. It's very fun, but if you really want to get the most out of the game, you need to play it more than once. This isn't a game you play once and then put away for a year. The more everyone plays Senji, the better the games will be. When you understand the subtleties of diplomacy, warfare and trading, and the way different things will work at different times, you will be better able to understand the intricacies of the game. There's a lot happening here, and Senji is much better suited to a hardcore, dedicated gamer than to your buddies who come over to drink beer and maybe break out a game now and then.

So I'll share one more definition of Senji that my complete lack of research has uncovered - 'kind of tricky but wicked fun.'

Senji might be a little tough to learn, but once you do, this is a really fun game. Go here and get one:
http://www.asmodee-us.com/games/strategy/senji.php
Posted by Matt Drake at 6:30 AM

Thanks for the review, Matt. How do you think Senji compares to games like Warrior Knights or A Game of Thrones?

I haven't played either of those games, so it's impossible for me to comment. Those are both FFG, and FFG doesn't send me games very often (like I've had five in four years).

played it once and love it!