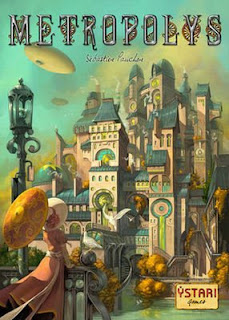 There's a big trend in the country right now - not just board games, but the whole nation - to be environmentally friendly. What with all the cars that run on dog farts and recyclable garden gnomes, it's refreshing to find a game that knows what's important - getting paid.

In Metropolys, you're a big-city developer putting up high-rise office buildings and downtown lofts. And not those trendy lofts with big garden spaces - you're tearing down that worthless green crap to put up some quality, climate-controlled living space. Metropolys is growing, and you're going to cash in by building towering high-rise condos and enormous rental properties. Of course, you'll be living on your ranch outside the city - who needs all that pollution? - but the citizens of Metropolys will thank you for giving them someplace to buy Chinese garbage.

Of course, it's never as easy as just bribing the planning & zoning committee and sending in a work crew. The other players want to build their buildings, and the city council has to get paid somehow. Otherwise, why would they bother to run for office? So you have to bid for the spots you want, and outdo the other developers to pave over that useless walking trail and put in a nice shopping mall.

Apparently, the city council is a little picky about what buildings they want. Each contractor gets an allotment of 13 buildings, from size one to size thirteen. The biggest building is the easiest to build, but you can only build one of each. After all, the Metropolys city council is concerned about smog and impact on butterflies and fruit-tailed hawks, and can't let everyone just build the Sears Tower everywhere. To put in a really big building, you have to pay a really big bribe. Or at least donate heavily to the re-election campaign fund.

So on your turn, you put a building down in a neighborhood in Metropolys. This is just to show the parks & recreation committee where you'll be bulldozing next, so that they can start fitting the children with respiratory machines and start writing the obituaries about how the old people are dying from 'natural causes'. You don't actually get to build right off the bat, because if another player wants to build a taller building in an adjacent neighborhood, they'll outbid you (bigger buildings means bigger bribes). Then the next person can propose an even bigger building, and maybe you'll get a chance to outdo them. It goes on until everyone decides to let the highest bidder build, or if they just can't bring themselves to destroy the last refuge for the Metropolytan fruit bat. The guts to do what has to be done - in this case, mowing down two hundred trees to put in a Whole Foods grocery store - is what separates the winners from the losers. The winner gets to build; the losers go home empty-handed.

Of course, there are complications even after you get the building permit. Some of those neighborhoods have subway access, and that will raise the rental rates for your condos and office parks. Some of those neighborhoods might have a Starbucks or T.G.I.Fridays already, and that makes them trendy - and thus more desirable. And then still other neighborhoods could have trouble - historically significant buildings. Then the pathetic protesters will come out, and write letters to the editor, and cry about how the first mayor of Metropolys once dropped a deuce in the outhouse behind the place, and you'll end up having to shell out more cash to hire an arsonist to burn the place down before the peacenik hippies block you from putting up your progressive, 34-screen movie megaplex.

The real trick is to make sure you build in the right place. Every player has extra tax incentives for building in particular places - one developer gets a check for building at the edge of the city, another gathers royalties for building next to the lake, and yet another might be able to raise his rent if he builds next to the fountains and statues that clutter up the city landscape. And even though it's not really in the game, you know everyone will make some money if they can lease their mineral rights to some unscrupulous mining company who will build a giant, noisy, explosive gas rig right next to a daycare center.

Once one contractor has put up his last building, the game is over and you count up your income. You get points for building in the right place, or lose them if you had to knock down the decrepit tenement building where the nation's president nailed his mistress two hundred years ago. As usual, the person with the most money wins.

It's so nice to see a game that doesn't pay lip service to tree-hugging environmental crap. It's even better that Metropolys is a really fun game. It's tricky, and clever, and requires lots of planning and weighing risks and capitalizing on the weakness of others. In that, it's a lot like trying to build a huge, ugly apartment building in the middle of what used to be Central Park.

If you know what's important (fun games, and building huge buildings in national wildlife preserves), you'll love Metropolys. You can go right here and get it:
http://www.funagain.com/control/product/~product_id=018517
Posted by Matt Drake at 6:11 AM

This game had NOTHING to do with Supyrman!!!

The game sounds kinda fun to me, I am one of those crazy tree loving hippies though, so I have done a lot of research and realize that your kids are going to live in a much different world then we did, 15-20 years from now when the water has risen a few yards this may not seem as cool as it is now, or maybe I am wrong and everything we are doing to the planet will not matter in the least?

You don't get to kill anyone so I guess this would count as a Eurogame?

Thanks for the review

Well, you don't get to kill anyone immediately, so yes, I suppose it would be a Euro. But if you give it thirty years, you'll be killing lots of people with emphysema and higher cancer rates, not to mention the drastically increased crime rate you get when you cram more people into the same space. So there's some body count in there, you just have to wait for it.

As long as we get to kill someone at some time I guess it would be worth playing! Who am I kidding, I would try any game at least once if it meant I wasn't working.