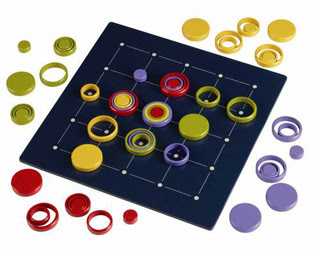 Abstract games are like Reiner games, but honest. See, in a Reiner game, you have a nifty mechanic that (often) works really well, and a generic theme that is usually so weak you could replace it with glue-sniffing monkeys. Abstract games, on the other hand, have absolutely no theme at all - they live and die by their mechanic. If a Reiner game is boring, it can sell because a publisher puts a bunch of pretty art on it. If an abstract game is boring, it just sucks.

This no-frills approach to game design makes reviewing abstract games a lot easier, unless you take a particular delight in making jokes about the games, in which case there's really not much to work with. I can't point and laugh at bad art or goofy characters if there are no characters or art. I'm not even sure what to mock, because Ringgz isn't even German. The publisher is French, but has made a game with no luck and no killing, so I can't make fun of that. If the game designer had been Italian, I might find some joke about spaghetti bolognese and drinking too much, but I'm not even sure how that would relate. Honestly, the only thing that's mockable about Ringgz is the name, and that's too easy. So do me a favor and laugh like I just told a joke about retarded prostitutes and hillbilly narcotics, and I'll talk about the game.

Ringgz is thoroughly abstract. There's a blue board with white dots on it, and each player gets a handful of rings and discs. There are four different sizes of rings, plus a big disc, and each player gets three of each in their color. The object of the game is to grab spots on the board and block your opponents from getting them.

So how this plays out is that you put down a colored ring, and then your opponents can each put down a ring. Since there are four sizes of rings, you could actually each place a ring on the same dot. But if you do, nobody can score that spot, because the point for the spot goes to the player with the most rings there. You have to have a majority or nobody gets it.

The trick to Ringgz is blocking your opponents. The game starts off by putting a disc down that has each of the four colors, and from then on, you can only put a ring or disc onto a dot if you have one of your colors adjacent to that dot. So if you put down a colored disc, it fills the whole dot, and nobody can score that dot. And better yet, you're the only one who can place rings past that dot, because now you're the only one who can match the color.

You have to be a little careful when you place those blockers. You can't put a blocker disc next to another blocker disc, and you only get three, so it can be tough to completely block out your opponents. Sooner or later you're going to run out, and while you've been building walls, those tricky bastards have been placing rings, and now they're behind your little barricade and they have all the points covered. And since you've been hiding in the back, all the juicy spots in the middle of the board are taken, and you're stuck trying to get just one more ring when your opponents are all drinking champagne and laughing about your misfortune.

Games of Ringgz tend to be pretty close. It's not unusual to have them end in ties. You'll see the final score in a four-player game end up 4 to 4 to 3 to 3. Not a wide spread. I don't usually think that's very good, but it is rather typical in an abstract game.

One neat thing about Ringgz is that the board and rings are all cut from wood and painted in bright colors. And the company that makes the game, Blue Orange Games, plants two trees every time one is used to make the game. Now, unless you're a real tree-hugger, that's not a good reason to buy a game, but for those of us who are addicted to breathing, it is nice that someone is paying attention. Of course, those crazy game-publishing hippies are probably clearing acreage to grow weed, but the thought is nice anyway. Maybe it's all medicinal.

Ringgz is a decent game, if you like abstracts. You can play in ten minutes, and it's great for your non-gaming family, because the rules are simple and the pieces are nice. Plus no theme means no possible reason for your Bible-thumping cousin to ask you if you know what's going to happen to you when you die. I'm not about to plan parties just to break it out, but I still play it every now and then.

Cons:
Short games leave you wishing there was just a little more depth
Every game is close, because there just aren't that many ways to win

Ringgz is a decent game, especially if you like abstracts. If you want it, you can get it here:
http://www.funagain.com/control/product/~product_id=015824
Posted by Matt Drake at 6:03 PM

another great review, even when you can't make fun of an abstract game you still get in some great jokes that make me laugh.
Isn't peace of mind medicinal?

Sounds like a simple game, that is a good filler till others show up, or for non-gamers. I like the remark about the Bible thumping cousin!

having a Botanical Garden & Conservation Project I think i fit into the tree hugger category? But with out the clearing land for weed! We plant a lot of Bamboo - the wood of the future!