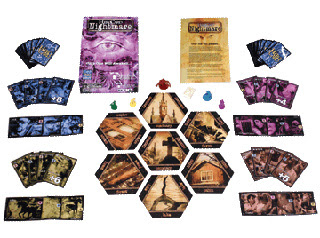 I could get used to game companies coming up with cool ideas. Last week I talked about how Red Juggernaut is putting every game in the same game world, which is a cool idea, but way before Red Juggernaut was giving funny names to awesome games, TableStar Games had a different cool concept for a game company.

TableStar Games makes the HeroCard line of games. Every one of these games is actually two games in one. Each HeroCard game combines a sort of dueling card game mechanic with a board game. The dueling thing is the same every time, but every board game is totally different. The dueling part can be used in every other game, so you could take a character deck from Cyberspace, mix in some cards from Rise of the Shogun, and use that deck in Nightmare. I'm not sure why you would do that - it would be mighty odd to have a hacker using samurai moves to escape a bad dream - but the point is, you can do it.

Before I get into the Nightmare part of this game, I'll go into a little more depth about the HeroCard mechanic. Each player in a HeroCard game plays a different character with three attributes - body, mind and X. Yeah, the last one is called X, because it changes for every game. The label is irrelevant, though. What matters is the score for each attribute, because when you play cards to attack or block, their cost can't add up past their associated attribute score.

It's a little complicated to explain, but if you play it you'll see that it's really not that hard. Each duel is essentially attacks and blocks, and the player with the higher total wins that duel. What that means changes for every game. Basically, the HeroCard duel just determines winners and losers, with varying consequences for winning or losing.

The HeroCard part of the game has considerably more depth than you might imagine at first. Once you play a card, it stays in play (but inactive) until you clear it. You can only clear three cards, and even then it has to be your turn, so if you fill up all your slots attacking, you won't have room for any defense. And different decks specialize in different things - you might have a deck with a decent number of tough nut-kick attacks, or you might have weak base attacks and devastatingly tricky modifiers. You might be able to clear cards out of turn, or you might be able to force opponents to put out worthless cards that clog up their attribute scores. There's a lot of strategy and forethought that goes into playing a decent deck.

So now I'll switch topics like a schizophrenic off his meds, and discuss Nightmare. In this game, everyone is trapped inside the same dream, and a magic camera has shown everybody what dream stuff is going to kill them. Like a dream zombie might take you out in the dream lake, or a dream cultist might kill you in the dream cabin. You can't be killed by the dream coyote in a dream desert, but then, neither could Dream Road Runner.

So what ends up happening is that you rearrange the dream to set up test scenarios by moving the dreamer, the killers and the scenes, then see if you can make everyone reveal what frightens them. If you can win a HeroCard duel, everyone who is scared of the killer at the current location has to admit to being frightened. If you know what scares a particular dreamer, you can attack them directly, and if you win, they die.

There are four different character decks in Nightmare, and I would like to have a talk with whoever thought these were a good idea. In order to win, you have to make sure the other dreamers die, but these dreamers are some cutthroat sons of bitches if they can go through with this. For instance, one of the dreamers is a girl, one is her boyfriend, and one is her dad. Now, as a father myself, I can completely understand why the dad wants to see a zombie eat the boyfriend's face, but I'm a little unclear on why the daughter wants to kill her dad, and why the dad wants to kill his little girl. I guess I'm reading too much into the game, but it seems to me that the person they should all want to kill is the crazy witch who owns the camera who trapped them all in the first place. Maybe I'm just old-fashioned, but if it comes down to me killing my daughter to survive, I'm throwing in the towel.

Plus some of the card art is downright goofy. The boyfriend, Deon, has more than one card where his eyes are open so wide he looks like he's been freebasing cocaine all night long. Will, the dad, is wearing mirrored shades and sporting a beard straight out of the WWF. Aisling, the daughter, has a card called Malice, which shows her tearing up a picture of her old man. Maybe Will is a real dick, and that's why she wants a leviathan to eat him. Of course, they all have good reason to hate Isis, especially because she looks like she just jumped off the set of a silent porn movie from 1920.

OK, so I'm a little hard on the art and the theme. Maybe I'm just bitter because my own daughter said she wouldn't play when she found out she had to kill her dad (and maybe I'm grateful, and should quit complaining before she changes her mind and pays me a midnight vision with a Menendez-brother shotgun). In all honesty, the game is pretty cool. It's a little like Clue, because you're trying to figure out who is scared of what without revealing your own weakness. There's bluffing, deception and deduction, plus some handy card play. Then it's a little like a CCG, with good hand management and deck-building. Then it's a little like a Nightmare on Elm Street movie, but instead of getting sucked through your bed in a spray of blood that repaints the ceiling, you just put down your cards and walk away from the table.

The best thing I can say about HeroCard: Nightmare is not to praise its cool plastic figures, smooth game play or brilliant graphic design. I could tell you how it gets all tricky and tense, but that's not the best thing I could say, either. The best thing I could tell you about Nightmare is that I would very much like to play it again, and the best thing I can tell you about the HeroCard mechanic is that Nightmare made me want to try all the other games in the series. In fact, I'll be emailing the guys at TableStar for more games right after I post this review. Hopefully they won't be too mad at the fact that I thought Deon kind of looked like he should be wearing a padded helmet and a spit cup, or that Will looks like somebody Hulk Hogan beat up in 1986, or that Isis looks like she got kicked out of a Charlie Chaplin movie.

Cons:
Card art makes all the characters look like they have Down's Syndrome
Odd character relationships (which happily have nothing to do with the game itself)

I wouldn't say Nightmare is my new favorite game, but I do want to play it again, and I really want to try some of the other HeroCard games. If you want to play, get yourself a copy here:
http://www.funagain.com/control/product/~product_id=017999~affil=GCGL
Posted by Matt Drake at 10:24 PM

Another Great review, this sounds like a great card game for sure, plus it can also be a board game, sounds like someone put a lot of thought into it. I thought the part about the boyfriend looking like a crackhead was funny. I may try and find this one.
I hope they send you the other decks so we can hear your reviews ont hem also.

Great work as always - now there is another game I want!