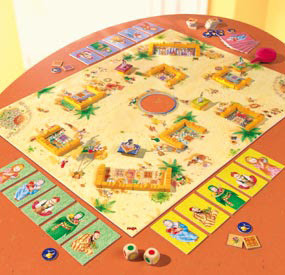 You may be wondering why I titled this one 'Haba Game Review,' and not 'Board Game' or whatever. See, Haba games are not like other games. They're in a league of their own. They're dexterity games meant for kids, only they're usually so interesting that adults end up liking them. They often have some strategy, which can be odd in a game made for children, except that apparently German kids are smarter than American kids. Maybe they're on the voucher system or something.

Akaba is one of those Haba games. At first glance, it's exceptionally weird. You've got flat plastic Arabians on flying carpets mounted on square sponges. You've got wooden walls and a game board with holes in it. You've got little picture cards with holes in them. And you've got what the game calls a bellows.

I'll take a minute and describe a bellows for you. This is a bulb-shaped apparatus made out of rubber with a nozzle on the end. When my kids were babies, we had a blue one, and we used it to suck boogers out of their noses. We called it the deschnozzalator. It gave me a start when I opened the Akaba box and saw a snot remover. The purpose of this thing is that you squeeze it and air comes out the nozzle, and then you release it and air gets sucked back in. Also, it was remarkably bad at sucking up boogers.

The object of Akaba is to collect the five gifts you need to give the members of your family. You fly around the bazaar on your magic carpet to get these gifts. And in order to move your magic carpet, you use the snot sucker to shoot air underneath the carpet.

Seriously. That's the game mechanic. You use a little turkey baster to shoot air at a tiny sponge. I am not making this up. And that, children, is why this is a Haba game review. Because a rubber bellows and a little sponge is the kind of mechanic that you'll only find in a Haba game.

There's even a little strategy in Akaba, because like I said, German children are smarter than American children. German kids would scream at you in harsh, guttural tones if you ever made them play Candyland, and then when they got to high school they would wear all black and be stylishly depressed.

It's a little tough to segue out of that last line, so I'm just going to go ahead and tell you about the strategy now. See, you float your carpet into these little shops, avoiding sending your carpet flying off the board or into the well. And if you get in a shop, there are these little present cards, and if it matches a present you need, you can put that little present on your little magic carpet. Once you take one present out of a store, you can replace it with another. Lots of times you won't need that present that you saw, so you have to put it back, but then everyone will know what it is.

Also, you can't just wail on the de-snotter for as long as you want. Another player has two dice with colored circles on them, and as soon as you start wheezing on the rubber bulb, they're rolling. As soon as they roll doubles, you have to quit squeezing your turkey baster (another phrase that might be a little awkward). The fact that time is going to run out, but you don't know when, means you might shoot that air a little harder than you meant. It also makes my daughter keep hitting her carpet with the snot sucker and flipping her little Arabian into the air.

It should be obvious to anyone reading this review that this is not a game adults are going to break out at parties, unless you turn it into a drinking game (and then I would play every single time). This is indisputably a kids' game. The thing is, once a couple adults see kids laughing hysterically and squeezing the bellows like their lives depended on it, the game will start to grow. The grownups will want to take turns hosing their fliers with a rubber bulb (yes, I did that one on purpose, and it doesn't even sound that dirty).

Akaba is a blast. It's made for kids, and my kids love it, but there's no pretending the adults don't get into it, too. If you've got kids, you've got a great excuse to pick up this riot of a Haba game.

Cons:
You feel like a retard when you play - but you don't care
Totally a kids' game

If you want to blow an Arabian around a bazaar (last one, I swear), you can buy it here:
http://www.funagain.com/control/product/~product_id=017500
Posted by Matt Drake at 5:27 PM

I am not quite sure I am up to the task of this game. So, in my first game, could you blow me and show me how it is done?

... Somebody had to do it and you know I can't leave well enough alone!