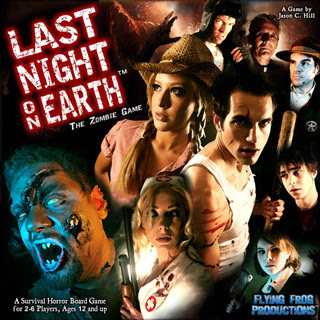 Boy, do I love zombie movies. You can talk all you want about the 'greater message' delivered by zombie movies, where they show how people can be worse monsters than the monsters, or the ecological morality plays, or how people are all zombies and you can't always tell the difference. But the real reason I love zombie movies is because they're like a super-extreme episode of Survivor. Only instead of getting voted off the island, a zombie eats your face.

I've played a few zombie games, but they tend to miss the point. They lack the zombie movie's 'normal people survive horrible scenario' that you get in most zombie movies. When surviving a zombie apocalypse turns into a tile-laying fiasco or a shopping spree, I just can't really get behind it. The first zombie game I've played that really captures the feel of a zombie movie is Last Night on Earth, from Flying Frog Productions.

For me and many of my friends, GenCon 2007 was the first we heard of Last Night on Earth. It was kind of hard to miss - they had Jenny the farm girl there as a booth babe, and she was smokin' hot. There were other characters there - most notably, some zombies, but nobody really gave a crap about them, because they wanted their picture taken with the hottie in the cutoff jean shorts.

(Quick, funny story about that girl. She wore her costume every day but Sunday, and then Sunday I saw her and noticed aloud that she was in a dress, not a cheesy straw hat and cowboy boots. She said she changed because she was tired of being objectified by guys. I have to wonder, what did she think was going to happen when she went to a gaming convention dressed as Daisy Duke? Did she think there would be this horde of sweaty guys with t-shirts showing pictures of dice and saying, 'THAT'S HOW I ROLL', and these guys would come over and respectfully mention that they loved her work with inner-city kids? Was she hoping she was invited to discuss her views on third-world poverty, and then felt totally cheated when she found out the guys were really only interested in her ass?

In all fairness, she was a really nice girl, and I don't think she had any idea what she was in for when she signed up to go to GenCon. She was a part-time model going to school to teach elementary school. She probably didn't realize that helping to sell the game entailed exposure to 20,000 basement-dwelling, societally-retarded pimple-heads reeking of armpit and sporting beards that wouldn't even look good on Kris Kristofferson.)

So this game is like a no-brainer for anyone who likes zombies. They had the game set up at the booth, and there's a board that displays a little town, dozens of plastic miniatures (more than half of which are extra-cool zombies), and two humongous decks of cards. Just walking past the game is enough to make you stop and look. The art is all photography with models, and any decent graphic designer could tell you what filters were used to modify the images, but the graphics are still really rich. There's just a ton of eye candy here (even if Jenny the farm girl isn't around). The game looks magnificent when it's all laid out on the table.

Last Night of Earth can scale for any size group from two to six, even though you've got one team of heroes and one team of zombies, because either job can be shared. You can have up to two zombie players and four heroes, or just one of each, and the game works exactly the same either way. That's pretty clever, I think. You can whip it out and play with the wife (and when you're done you can play Last Night on Earth), or you can play it at a party with five of your best friends.

The game plays a lot like a zombie movie. There are bunches of different scenarios, so one game might have you trying to kill a host of zombies before they eat your friends, while another just has the heroes trying to gas up the truck and get out of town. The heroes might try to protect the manor house in an homage to Night of the Living Dead, or they might be trying to blow up the zombie nest before the infestation can spread. And whatever the heroes are doing, the zombies have the same goal every time - eat the good guys.

Last Night on Earth is like one clever mechanic after another. The rules for spawning more zombies are ridiculously simple, but still manage to control the zombie hordes while keeping the 'they just keep coming!' feel to the game. Searching for tools and weapons is easy - draw a card instead of moving. That's pretty easy. And fights are easy, too - roll some dice, high roll wins, doubles kills a zombie. Take two or three hits from a zombie and you get to join them in eating your buddies.

The rules are simple, the pieces are great, and the graphics are extravagant. If this felt any more like a zombie movie, you would swear you're watching Dawn of the Dead again. Heroes and zombies each have a huge deck of cards that let them break the rules. The best card is the one called, 'This Could Be Our Last Night on Earth,' where a male and female character in the same building have to pass their turn. Why? Because they're having sex. And as anyone who watches horror movies knows, you never, ever want to be having sex when the zombies are attacking. Zombies are perverts, and they attack naked people first.

Usually the zombies win. If you watch Romero movies, you knew this going in, and shouldn't be surprised. Sooner or later, the zombies always win. There's like five gazillion of them, and three of you. Slow or not, time is on their side. But it's not impossible for the heroes to win, especially if they do a good job of cooperating. One of the funniest games I ever played would have made the worst horror movie ever. It would have gone something like this:

Sheriff: Zombies are attacking! We've gotta get out of town! We have to find the keys to that pickup truck!
Jenny: You mean these keys? They're in my pocket. That's my truck.
Sheriff: But the truck is out of gas! We have got to have gas, and the zombies are all over the gas station!
Preacher: I just filled up this gas can. We can use this gas.
Sheriff: Quick, then, everyone in the truck! They're coming! Where's Billy?! Oh, God, where's Billy!?!
Billy: I'm right here in the back of the truck. I was reading a comic book and smoking a doobie. Why?

It was fun to be the heroes for that one. But it's a lot more typical for the unending hordes of shuffling undead to overwhelm the heroes, especially if the dice like the zombies. But you really can't complain - that's how zombie movies go. The zombies tend to eat a lot of people. If they were really bad at it, there wouldn't be very many zombies, would there? This isn't meant so much as a competitive game as a recreation of a genre, and while there is a contest to be had, the game is more about living out a zombie apocalypse.

You will be hard-pressed to find a zombie game that does as faithful a job of making you feel like you're in a zombie horror flick. Last Night on Earth sports great components, fantastic art, simple rules and plenty of variety. Plus Jenny the farm girl is all over this game.

It can be tough to run down a copy of Last Night on Earth. It tends to be sold out a lot. Thoughthammer lists them in stock right now, but I don't make any guarantees.
http://www.thoughthammer.com/last-night-on-earth-the-zombie-game-p-4314.html
Posted by Matt Drake at 8:54 PM

The first day I got to play this it was so much fun that I considered it well worth what I paid for it, even if it never saw the light of day (or night) again. Luckily I've gotten in a few more since then, and everyone's loved it, even my non-gaming wife.

Oh, and since this is the first comment for this game, let me just say Brrrraaaaaaaaaiiiinsss!!!

I keep thinking I want this game, but each and every Review/Game Recap screams LNoE is simply a slickly packaged version of the free print and play game Zombie Plague ...
http://www.boardgamegeek.com/game/7514

I won't lie and tell you there are no similarities, but LNoE is a lot more than Zombie Plague. There's a lot more depth, and the mechanics of the game do a lot more to reinforce the sense of impending doom that you see in zombie flicks. There are more play options and more scenario diversity. I think Last Night on Earth is just a lot more game.

Plus it's got Jenny the farm girl. Zombie Plague does not.

Dude you forgot the best part...the Music CD! (If you bought the game @ GC or ordered it form there site)

Seriously its a great game for a large group of friends or soon to be friends.

And having to read the catch phrase on your card every time you kill....CLASSIC.

I didn't forget the CD.

Nice write up as always, how long does a game take for 2 people? and for 4-6 people? do the extra people add a lot more time?
When playing with 4 or more, is there much down time?

Great review. The game is very good.
Do you think the CD is boring?
I think cool, to create a fun environment.