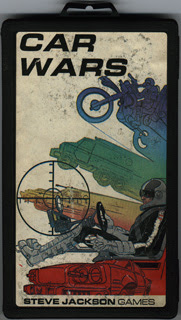 In 1981, we were all pretty sure that we were going to die in a nuclear holocaust. Mad Max wasn't fiction, it was prophecy. There was little doubt that Ronnie Raygun was going to make one joke too many and the Red Menace was going to drop the Big One right on our collective ground-zero faces.

And as gamers, we couldn't wait.

See, if nukes destroyed 90% of the world, that meant the other 10% was going to be the coolest dog-eat-dog slaughterfest ever imagined. We would all drive cars with guns under the hood and shoot rockets at each other from our roving battlestations in the back of semi trailers. Plus maybe the world would be populated by talking animals who knew kung-fu (but that was an entirely different game).

And since we were so excited about the idea of global apocalypse, Steve Jackson made a game for us, and he called it Car Wars. In this bleak future, starvation and destruction have reduced society to a collection of small outposts against total anarchy. Autodueling is America's new sport, and even the ambulances have linked machine guns in turrets. Roving biker gangs stalk the highways that stretch for empty miles between walled truck stops.

In other words, it's awesome.

Car Wars is a tactical recreation of a car fight. Cars have armor, machine guns, lasers, rockets, smoke screens, mine layers, and a whole bunch of other weapons of automobile destruction. Each turn is a second long, broken into ten phases that are .01 seconds long. The average autoduel is over inside a minute, so you better have your finger on the trigger, because if you blink, you'll miss the whole thing.

The rules for Car Wars are fairly involved. You track armor damage for each side of the car, ammo depletion, acceleration, cruising speed, and handling class. Making a simple lane change can involve two die rolls, and even more are required if someone is shooting at you. Try to fire a rocket while you're making a right turn and you could spend the next five minutes rolling dice and checking tables.

On the other hand, if you can look past the time it takes to scratch your ass and check your rearview, Car Wars is a pretty cool game. It feels very much like an accurate reenactment of a moving battle. It sacrifices playability for that accuracy, but in 1981, we didn't have very many games with simple rules. We had bookshelf games with rules sheets full of 8-point type in three columns, organized into structured outlines that would make your eyes bleed after twenty minutes. By comparison, Car Wars was a child's game.

Another thing that made Car Wars awesome was the way you could make your own cars. You could make a big cargo van with a flamethrower in the turret and a laser gun that shot out the back bumper. You could make a convertible that dropped land mines out the exhaust and fired an anti-tank gun from under the hood. You could make motorcycles with side cars, and later expansions even let you make helicopters. Customizing was a blast, and you could spend a whole night figuring out how to balance your acceleration with that last point of armor.

The greatest thing about the 1981 version of Car Wars was that it was cheaper than used dirt. It came in a little plastic box that was about the size of a postcard, and all the map pieces were gray-and-black grids with pictures of roads on them. The game actually suggested you make your own maps. Can you see today's spoiled-rotten preteens stealing a pad of graph paper to spend four hours creating an autoduel arena? Hell, I can't get my seventh-grader to quit playing Club Penguin long enough to finish his art homework.

The car counters were hilarious. They were light cardstock and came in one big sheet that you had to cut out by hand. They all showed a vehicle from the top down. My favorites were the pedestrians - little cardstock counters that were smaller than a thumbnail, with just enough detail to tell that they were wearing cheesy armor and carrying shotguns.

Breaking open Car Wars for this review gave me a mix of nostalgia and gratitude. Nostalgia because I remember spending whole Saturdays playing out autoduels that never lasted more than a minute in game time, but hours in real time, then calculating repair costs and salvage I could get from enemy vehicles. I remember how Car Wars lit up my imagination, making me expand it into a pseudo-RPG so I could play it with a couple buddies, until we all got bored and wandered off to read comic books or talk about girls.

But those nostalgic memories are mixed with a sense of relief. If we had this game today, you couldn't sell it if you didn't give us little plastic cars. The map would have to be full-color illustration, and we would need large cards with counters to track everything. And there would have to be simple rules for those of us who only have an hour to set up and play a game, and it would have to move fast enough to keep today's ADHD video-game addicts occupied long enough to forget about chatting on their cell phones.

When I think about how cool it would be to have a modern update to this game, with a variety of pre-painted cars and 12mm pedestrians, three-dimensional terrain and colorful game boards, I get all excited about Car Wars again. I want to rumble in an autoduel with clean rules and fast-moving game play. Hopefully Fantasy Flight Games would make it. Hell, they brought back Mutant Chronicles, they could bring back Car Wars.

But then, if we saw a redone Car Wars, it would make me realize how slow and unattractive the original was. Car Wars was really a very good game, but it catered to a completely different gamer than the guys who complain about Heroscape turns taking too long with roborats. I want to remember all the lazy Sundays spent recreating city-wide battles in Midville, not how you could run to the bathroom while your opponent took his turn and still get back before he had finished his own movement.

Car Wars was fun. I am glad I have my old copy, along with Sunday Drivers, Truck Stop and a couple other expansions. I like to open up the closet now and then and flip through the stuff I have for the game, pour the counters out on the table, choose the coolest-looking cars and lay out the map of Midville. And then I like to put it all back in the closet, pull out Last Night on Earth and see if I can get someone in my family to play the zombies.

I couldn't give you the first clue where you could pick up a copy of Car Wars. It's been out of print since the fall of the Berlin Wall let us start thinking that maybe we weren't going to die at ground zero.
Posted by Matt Drake at 4:44 PM

Matt, Great review and nostalgic for me as well. Didn't FFG make Wreckage? I have it in my garage and if I recall it is quite fun and quick and simple, nice bits... And you play it with Hotwheels!

Another nice write up, not much on the review side - but great writing. I remember when Cars Wars came out, it was the bomb back then, I remember getting into A $10,000 prize tourney at GenCon and doing rather well for a 13 year old kid - oh I was close to getting into the final match - so close.

It was a lot like Mad Max - had a great feel to it. We played that one for a while.

I was one of the few that saw "Mad Max" in the theater in 1979. I was a sci-fi watching, boardgame playing fool back then.

I had been playing some of Steve Jackson's other mini games when Car Wars came out and I just had to have it. We played the hell out of that game in college.

After playing Avalon Hill games it seemed easy. And you got to blow up a lot of stuff.

I went on to write a bunch of Space Gamer and Autoduel Quarterly articles and even wrote a Car Wars supplement published by SJG.

Thanks for the flashback!!!