Board Game Review - Mutant Chronicles: Siege of the Citadel 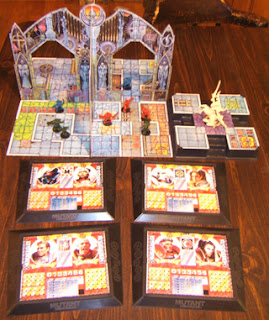 This week has been all about science fiction games, but there's a bigger theme - telling a story. In Star Frontiers, a continuing saga of heroism and high adventure unfolds as you play. In Battlestations, it's more like you skip all that boring dialog and get right to the part of the story when people start shooting at each other in space (of course, that means you miss the tear-jerking love story, but do we really need that anyway?). And for our final review in this sci-fi series, we'll review Mutant Chronicles: Siege of the Citadel, in which the players tell an episodic story that is pure bullets-and-blades action.

So you can see from the continuing theme that I like games that tell stories, especially if they're exciting stories. Mutant monsters and cyber-enhanced warriors in a dark tower of doom make for a pretty exciting story. Of course, the story mostly boils down to, 'then the good guys found the bad guys, and bullets started flying,' but who cares? It's like watching a Van Damme movie. You don't go for the story, and you sure aren't there for the dialog. You're there to see Jean Claude Van Damme do the splits and punch a bad guy in the junk. If someone happens to break out guns and start spraying bullets everywhere, that's just a bonus.

With all this talk of story, it might be nice to explain the premise of the game. For starters, there is some kind of evil, mutant-making force, and it's centered in a citadel. The mutants are a little like a cross between Toxic Avenger and George Costanza - they look gross and they're not too bright. The armored, gun-toting warriors of the future (called doomtroopers) can kill them pretty easily - until, that is, there are a couple dozen slop-faced undead facing off against two mercs. Then it gets a little closer to a fair fight. The troopers have to storm this citadel, gather intel, locate the bad guys and kill 'em all.

The ambiance in Siege of the Citadel is accomplished in several ways. First, every combat participant in the game gets its own plastic miniature. From the ten different doomtrooper figures to the dozens of mutant minis, there is just a ton of plastic in this box. And these sculpts are great, so you could even use them in different games just because the figures are so cool. If I was a lot more industrious, I would paint them all because that would rule.

Then you've got the cards that describe the weapons and gear the mercs can carry. There are full-color illustrations of the various implements of destruction, and these weapons are gnarly. Big ol' chainswords and automatic plasma cannons, injectable performance boosters, and high-tech targeting devices can all be added to an experienced trooper to make them even more deadly than they were before they strapped into a big suit of armor and whipped out a sword with a chainsaw in the blade.

Finally, the board itself is great. Cracked stone tiles, metal plates, conduits snaking underneath steel grating - these all make the citadel a pretty creepy place to hunt. And since there are eight different tiles, they can be rearranged to make a wide array of maps. There's even a stand-up cardboard decoration with creepy gothic art all over it, to add just a little more freak factor to a board already overrun with zombie soldiers, alien gunslingers and six-limbed mutant horses with rail guns.

The mechanics of the game are simple. On a player's turn, he can move twice, attack twice, or do one of each. Attacks are carried out by rolling dice whose number and color are determined by the trooper's ability and his weapon. These dice have two, three or four hit marks, and in order to kill a mutant, a trooper needs to roll as many hits as his target has armor points. These are undead bad guys, so there's no points for second place - you either drop the mutant, or you wasted a shot.

Doomtroopers get quite a few more details, since these are the heroes and everyone is paying attention to them. The doomtroopers have armor levels, promotion points, credits, extra actions, and a whole bunch of things that they hope will give them the quality edge over the mutants' quantity.

The real beauty of Siege of the Citadel is that it does not require one player to always be the bad guys. Ideally, you'll have five players, and at the beginning of every scenario, one player is chosen at random to be the mutants, with each other player controlling two doomtroopers. The bad guy can score points for mutilating the good guys, and could spend these points on the next game to improve his own team of mercenaries. It works out great, and pretty much means everyone gets to play the bad guys now and then.

There is a downside to Siege of the Citadel, and it's a really bizarre player requirement. The game can be incredibly stilted if there are less than five players, and you can't play it with more than five. There are some rules to try to make it scale down for fewer players, but they don't really work very well, and the game even admits that. So you'll have to find four friends, invite them over, and then make sure none of them cancels or brings someone extra. It makes coordinating a game exceptionally difficult when you have to have exactly five. The game really does work best with five, and it's fun as hell when you can pull off five players, but I can't recall a time I ever set up a game night and was able to control exactly how many people showed up.

It's worth trying, though, because if you can get five people to form a regular gaming group, the campaign option in Siege of the Citadel is fantastic. Each scenario builds on the last, with primary and secondary objectives, and promotion points carrying over from one scenario to the next. You can get weeks of regular play out of the game, if you can get the same four guys to come over every week (and good luck with that).

But even if you can't arrange the ideal group size, Siege of the Citadel is still a pretty cool buy. There a 38 really cool figures and a board you could use for other games. You could adapt the rules to be a two-person game and build your maps on Heroscape terrain. The whole mood of the game is dark and creepy and awesome. And you can even play it with less than five, as long as you don't mind the bad guys routinely stomping a mud-hole in the good guys.

Cons:
Who the hell can get exactly five gamers to commit every week?

It's a real shame Mutant Chronicles: Siege of the Citadel is long out of print. For one thing, it means I have to shoot the opening photo myself, and that's a pain in the ass. But really, it means the only way you'll find this game is on eBay.
Posted by Matt Drake at 7:01 PM

I'm hunting this game from long time, and still not able to find it at a reasonable price. In the meanwhile, i've managed to recreate it with paper figures, game images and some thing drawn by me.

So finally i've played it... and i think that it's not good as the father of all these games: Space Crusade (or StarQuest in some EU places).

Siege Of The Citadel tries to be different, but it lacks of... frenzy.
I never felt "under pressure" as in SC, and it is a bit more slow.
It's a shame, 'cause I loved the Mutant Chronicles theme (and i own the CCG game and the full 3D Warzone).

So i will say that, for the same money, i will go to buy Space Crusade.
Or, as i've done right now, buy the last box of Hybrid (a Rackham game tied to the Confrontation universe).

I'll have to look for that. It looks right up my alley.

You do realize, if you don't wish to go to the trouble of photographing the game yourself, you could always "steal" the image from BGG right?

another great review, it sounds really fun, but that 5 player things sounds way to hard for me to get a constant 4 others to commit. But if I ever get the chance to buy it, Now I know it is worth while

I haven't played this in a long time - I bought it new at Toys R Us and played it a bunch. I never got a full group to play the campaign mode, but I have always wanted to. There is just so much depth to this simple game.

So, i finally managed to get this game, and played three missions. I have to re-state my first comment:
this game is good as my loved Space Crusade. It happens that we always played it wrong: the rulebook is a real mess, and being not native english speaker does not help to catch the "exact wording" needed to build the ruleset in my mind.

If someone will read this review, i want to say: buy it, download from BGG some rule summary and some faq, and go spreading bullets.
If you can, buy also Fury of the Clansmen (it is another Mutant Chronicles boardgame, but it works much more like Space Crusade): you can combine the two game with very little efforts, and they are both really good games.