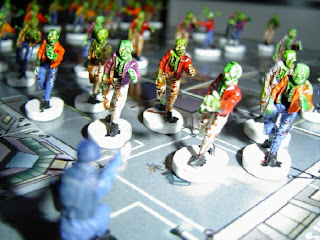 One of my favorite games of all time is HeroScape. It's endlessly expandable, magnificently customizable, and tactically brilliant. You can add cowboys to make it an Old West game, or power armored guys to make it sci-fi, or mutants and shotguns to make it all apocalyptic. It's an amazing game, and I've spent countless hours of my life enjoying it.

And somehow, it's going to die.

Well, OK, that was a little dramatic. We're hearing about a new August release of some expansion stuff, but a lot of people are pretty sure that it will be the last one. Letter-writing campaigns are in the works to save the game, but many people are already planning the funeral. So many fans are furious at Wizards of the Coast for killing their favorite game. What will they do once the game is dead?

Here's an idea - play it. What are you, retarded? If Wizards quits making expansions, are they also coming to your house to take it all out of your storage closet? Are they sending out secret hidden remote signals that will cause all your game pieces to spontaneously erupt? Is the game suddenly less fun because you can't spend all your money on it?

Here's the thing. A game is not dead until people don't play it any more. It irritates the piss out of me to hear people deciding they're not going to play a game any more because no new stuff is coming out. When a publisher quits producing expansions for a game, it doesn't die. It dies when you get all disgusted and shove it in a closet. And that's stupid, because if a game is fun, play it. Who gives a crap if it ever gets expansions?

There are lots of examples of this happening. Like, when is the last time you heard about a Mage Knight tournament? How about Dreamblade, or Doomtown, or Seventh Sea? Let me guess - you haven't heard about those tournaments because everyone quit playing the games. And the big tourney gamers quit playing the games because they couldn't go get a bunch of free crap and a national rating. And frankly, if you can't muster the gumption to get together with a bunch of friends and play a game that you enjoyed for several years, then you deserve to be disappointed, because you're a whiny, self-pitying douche who depends on some big company to tell you what to play.

But you don't have to be a douche. You can still play your games. Look at Squad Leader - this game has developed a huge international following, and the last time it had anything published, I was still in high school (for you nitpicky jackasses looking for a reason to get your shorts in a twist, I'm not counting the ASL starter kits. They're not exactly official releases). Somehow, the people who enjoyed Squad Leader for ten years figured out that they could still have fun even if nobody ever published another Squad Leader expansion.

Or we could look at HeroQuest, which hasn't had new stuff released in nearly twenty years. And yet somehow, there are huge fan websites, and people playing this game all over the country. They're not crying into a bucket of beer about how Milton Bradley ran out and stabbed their game to death, because they're not crybabies. They somehow manage to have the intellectual fortitude to decide for themselves which games they want to play, and not depend on a company to tell them what's fun.

I could go on, but you probably get the idea. It's asinine to accuse a game company of killing a game. The fact is, your ability to enjoy a game has ZERO correlation to the number of expansions that came out last year. You only think it does. If you can't have fun with a game unless it is constantly churning out new stuff, then you're a fad-following drone. I'll bet you had parachute pants and feathered hair, too.

Of course, mindless fanboys are not the only things that drive people to particular games. People are really, really stupid. They'll pay astonishing amounts of money for figures just because they could only have scored them at a tournament (which is especially insipid in the case of HeroScape, where the exclusives are just repainted figures, and you could just print out the card and play the exact same game). And when those exclusives come around, greedy jackholes start seeing dollar signs rolling up behind their eyelids. Plus every idiot fanboy just has to have one, and they'll sign up to play just to get away with a figure that they can show to their friends.

Then there are the big-time hot-shot gamers who only play games if they can go out in public and prove their prowess against people they never met before. These people are often the first to jump ship like rats when a game looks like it might not see more expansions. Because apparently, if Upper Deck or somebody doesn't reserve back rooms in game stores to entertain these fickle fans, it means these chest-thumping assholes can't play any more.

And that's stupid, too. To return to the original example, the entire HeroScape tournament scene started out in a movie theater lobby in East Dallas. First place got two boosters (provided by one of the playtesters) and a foamcore dice tower. Second place got two boosters. Third place got to spend the day playing games with his friends, which means he came away with a win, too. HeroScape's publishers have never officially endorsed the tournaments, and yet there still exists an incredible tournament scene that rivals - and often dwarfs - lots of officially organized events. People still come out in droves to play this game, and probably will for a long time to come, even if Wizards never creates another thing.

So if you've got a game that you think is fun, you can keep it alive. No publisher can ever make your game dead. In fact, no publisher can keep your game alive, either - that power lies entirely with the fans who play it. Take a little responsibility for your own entertainment. If you like a game, play it. Get some friends together and show them how to play. Make your own pieces, and your own rules, and your own figures. Quit being a punk-ass little bitch and just play what you like.
Posted by Matt Drake at 10:06 PM

You rock. That is all there is to it. This covers everything gamers seem to have forgotten.

Nicely put my friend. Idiots who only play to win stuff already lost.

I saw all of the WizkidsGames die, however that hasn't stopped me from playing them from time to time, it just upsets me that people will store them away because the company doesn't exist anymore.
You've got still everything there to play and it's got unlimited replay possibilities.
I haven't really played with HeroScape but I've only heard good things about it, so don't be daft and keep on playing it.
Cheers;

Well Said! I think i'm going to go dig some old "dead" games out of my closet for this weekend.

You can't make me play good games!!! I need to buy what's new and has super-rare figures or cards because I can sell them on EBay to but more packs to try to get more super-rare cards to sell...

Well said, Matt. My kids enjoy HeroQuest even if it is out of print and I have also heard that chess is dead because there hasn't been an expansion figure pack or map in, like, 150 years...

Bravo! You hit this one right on the head. I originally started reading your blog through heroscapers, but I get tired of going there now because of the doom and gloom attitude.

My friends and I still play Mage Knights every so often (especially dungeons) If we ever got tired of the existing figures, we sure as hell would be making our own too.

If a game is fun, keep playing it.

I completely agree with what you're saying. I'm not selling off or permanently stowing my HeroScape stuff ever. It's the game that got me into gaming and is still one of my absolute favorites. I still want WotC to keep releasing stuff, because it only adds to the wonderfully diverse universe we've already gotten, but there was a game worth buying and keeping in the rotation as soon as the original master set was released.

Nice Rant, So you mean I should still go to GC even though there is no exclusive to be had and sold for big $??? SInce I got 7 of the exclusives last year and well um - gave them all away ( yep even the ones I got signed to me personally ) I guess I may not be playing just for the free Swag.

Even if Heroscape stops getting new stuff - there is so much wonderful stuff over at Heroscapers.com that you could expand it for the rest of your life and still not see it all.

Well said. But I'm still a fanboy who has to buy exclusives. :P

The only issue I have with "dead" games is that if you've played it and love it, it's hard as hell to get a copy for a reasonable amount of money (see Warhammer Quest)

Heroscape is the game that got me back into gaming and is still my favorite. I haven't been into the tournament scene but the guys I game with once a month demand heroscape damn near every month.

I'll be disappointed when WOTC stops producing the game but I have everything released to date which will aloow me to play the game for a looooooong time. And I can always go to fan customs on heroscapers.com for more material.

So I'll keep playing Heroscape after WOTC is done and maybe I'll be able to introduce a little variety into my gaming group.

BTW, I check out the news section at heroscapers all the time and haven't seen the negativity and doom saying - where is all that coming from?

Lastly, another good rant, my personal favorites are when you reply to people who took objection to your review, but this was good also.

For the life of me, I could never figure out why people think something that's tremendous fun today is suddenly not fun tomorrow only because there won't be any more "official" expansions for it.

I think it shows that so few people nowadays really THINK FOR THEMSELVES; they prefer to be spoon fed everything. Maybe it's the way of the new generation, which is MUCH different than the way we 40-somethings grew up?

to put another spin on an already great point-- if your favorite musician stops putting out albums, do you stop listening to them? i love bob marley's music, but i didn't walk away from his albums when he died. i keep playing them and like to think i help the spirit of his music live on.
if music fans can do this, so can gamers.

Man, you speak TRUTH. I've never understood why gamers not only need a game to be in print to enjoy it.

Of course edition hell seems to be the only thing keeping the RPG industry afloat so I guess stupid gamers do have a use of some kind.

No wonder I get railed on for daring to play older and more niche games.

Course they will take my copy of Squad Leader and Ogre/GEV from me when they pry them from my cold dead hands.