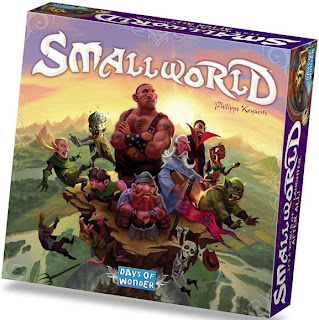 Let me tell you a story.

Once upon a time, there was a little game company called Days of Wonder. They made all kinds of games, but all the games had one thing in common – when you opened one of their games, it was like discovering a box of toys on Christmas morning. Whether you found pirate ships, monks, soldiers or gladiators, there was just so much in the box, and it was all so pretty, and it was all so fun, that every game was like opening a treasure chest.

People started to take notice of the little game company and their games that were like toys, and before long, Days of Wonder became a big game company. They were much loved for bringing fun and happiness and variety to families across the world.

And then came the train games.

The first one seemed like a good idea. It sold like gangbusters, and while the board wasn’t as gorgeous as some of the other games they made, there were cool plastic trains. But that game began to grow and take over, and after a while, it seemed like the little game company had become That Big Company That Makes That Train Game Over and Over. Many fans turned away, saddened, missing the little game company that had provided so many wonderful toys, and now seemed to only churn out expansions for one game that just kept getting less interesting.

When the day seemed darkest, when all the train games seemed to run into one another in a long, continuous parade of same-old, same-old, a hero emerged. A hero named Small World. And the saddened masses paused, turned back, and hope emerged. Maybe the little game company was back! Maybe this new hero, this Small World, could bring back the joy and color and variety and FUN!

So will our hero herald the triumphant return of the little game company? Will Days of Wonder return to making games that leave their fans with a sense of wonder? Or will fans continue to wonder if Days of Wonder will ever make another interesting game?

I’m happy to say that, as far as I’m concerned, the little game company is back. Small World is fast and colorful and tricky and just plain fun. There are no little plastic people, so it’s not a complete recovery to the box-of-toys days, but the illustrations are absolutely fantastic. The board is gorgeous and the rules are easy to learn.

From the chatter I’ve heard, Small World is an awful lot like Vinci, a game I’ve never played and can therefore not comment on in any way. You get a starting race on a map that doesn’t have near enough room on it, and your starting race expands all over the place, trying to grab as much land as you can and hold it as long as you can. The other players send their races out, too, and before long you’re running into each other, killing off enemies like mosquitoes in a bug zapper.

Every race has special abilities, and then they get a random ability, too. So you might have merchant amazons, or commando orcs, or pillaging tritons. You have to exploit the abilities to hold onto land as long as you can – and then you have to know when to cut loose of your active race, let them slide into decline, and start up another one. If you switch too often, you won’t be able to get the best mileage out of your conquering races. If you don’t switch often enough, they’ll get stale and stop expanding, making themselves soft targets for the aggressive races that are left.

Small World is just plain fun. It’s easy to learn the rules, though the various combinations of abilities and races can get a little complex. There’s really no luck, so that’s kind of dry-toast Euro, but you’ll spend the entire game trampling the other races on the board, and that just refuses to get old. Bodies will pile up all over as the humans kill off the sorcerers, then the ghouls kill off the humans, and all the while the giants are killing off anyone they can reach.

So it looks like the little game company might be back. I have cautious optimism – Small World is so fun that it could usher in a new age of fun Days of Wonder games. But if the next game has the word ‘ticket’ in the title, I can only pray that the full name is ‘No More Speeding Tickets’, and it’s a game about blowing up cars on the abandoned highways of post-apocalyptic America.

Pros:
Beautiful, expressive art
Rules are easy to learn
Plays really fast, and has great combos that are a ton of fun to exploit

Cons:
All the possible combinations mean you need one hell of an FAQ
I still wish they had plastic people in the box

Dogstar Games carries Small World. You should buy it from them.
http://dogstargames.com/product/DOWsmallworld
Posted by Matt Drake at 8:05 PM

I know what you mean. All games I play are, roll some dice, or move some figures, or read a card, or place a counter. So boring.

Enrique, I smell sarcasm in your post. Let's just say that Small World didn't live up to the hype.

funny, for me it goes beyond the hype. this is the almost perfect bridge between players and non players.

So, are you saying that Small World has virtually no killing? :-D

Is it a kind of fun game? Could I play it as a way to relieve my stress after doing my busy activities along day? If so, I'll choose and play it.