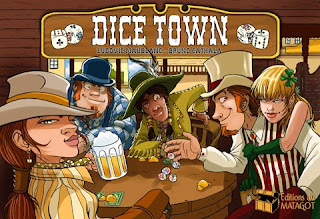 Know what's irritating? When people think they'll sound like an old 50's Western movie if they talk like they were ignorant hillbillies. You see this a lot in games - writers who think they're very clever because they write Old West games and say stuff like, 'Well then, pardner, ya gotta roll a d8 ta check fer reoccuring damage.' Yeah, because Clint Eastwood would have totally been talking about polyhedral dice while he was shooting half the town in the brainpan.

I admit that I was tempted to make the same mistake when I began this review, because Dice Town is one of those Western-themed games that makes undiscerning writers decide to forget all the spelling and grammar they learned in junior high in an effort to sound authentic. Happily, I remembered groaning my way through the rules for Doomtown, and found restraint. Instead I'll just pretend I'm a reasonably educated writer who knows how to talk about a game without sounding like a Kentucky mountain man with gravy stuck in his beard.

Fortunately, the authors of Dice Town were similarly restrained, and the rules are in normal, 21st-century English (even if they were translated from French). The idea is that you're all trying to rule a small town in the Old West by getting the most land and the most gold. The theme was probably the result of the main mechanic in the game - poker dice.

I've played poker dice before. They're not that interesting. You only have six sides, so you're probably not going to win a pot with an ace-high garbage hand. In fact, it's not entirely rare to roll two pair with your first roll, so hands tend to be high.

However, Dice Town makes poker dice interesting, because you get different rewards based on your hand. The highest hand gets to grab land, which is great, but nearly anything you roll is going to get you something. Get the most nines, for instance, and you can pilfer the gold mine. The most tens lets you rob the bank and get a little spending money. The most Jacks gets you a trip to the general store for useful cards, Queens let you hire saloon girls to steal cards from other players, and Kings let you claim the title of town sheriff and decide ties. Oddly enough, there's no reward for the most Aces, but if you have the best hand with lots of Aces, you're going to grab a lot of land.

A few more considerations make the game even more interesting. For instance, you need land to win - but if the only land available this turn is dry desert, you might be better off trying to get a lot of Jacks and draw some general store cards. Or if you're running low on cash, you might be really interested in robbing the bank and restocking your funds. And if you don't get enough of anything to get a reward, you can always visit Doc Badluck - which is a great idea if you want to run a sting and just steal from everyone else.

Another great mechanic that may be a little undervalued is the sheriff. If you're in a dead heat for the top spot, the sheriff decides the winner - which is especially convenient if you're the sheriff. Ties can happen a lot, and that's even cooler if you're not the one in the tie, because then you can open the bidding and let other players bribe you with cash, gold and land.

But the coolest thing (if you ask me) is how you build your hand each round. Normally you roll all five dice, pick one to keep, and then reroll the rest. You do this five times, and then you're done. But if you roll four Aces on your first throw, you can pay a buck apiece to keep those three extras. And if you already have most of a straight, you can pay a dollar to reroll all the dice you haven't kept so far. Having money means you can afford to rig your hand a little, but if you blow all your dough early on to grab a single advantage, you're going to wind up desperately trying to pick up a bunch of tens so you can rob the bank. Meanwhile, everyone else is splitting gold and land grabs.

Dice Town moves fast. There's really no downtime for anyone, since everybody is rolling at the same time. And since you have to leave your kept dice revealed, there's a fair amount of strategy as you roll your way through a round - if you want to visit the saloon, and see another player with three Queens, you may end up spending a pile of cash trying for that four-of-a-kind.

My only real complaint with Dice Town is really lame, and it's about the theme. Sure, you're rolling poker dice, so it feels sort of Old-Westy, but the town could be replaced with a James Bond casino, or mobster wars, or nearly anything that starts out with poker. It's cool enough, but the theme isn't quite as hearty as you might like. Really, though, the theme is represented, and I did say it was a lame complaint.

Dice Town isn't going to appeal to poker purists. Of course, I don't tend to think poker dice appeal to poker purists, so I think that's probably fairly obvious. If you're thinking that you're going to shoot for the best hand every time, you'll be a little disappointed when you realize that it's more important to choose a target hand than it is to shoot for the highest hand. There's no pot, and no real bluffing, but there is a lot of interaction and strategy. It's not a card game - but it's a heck of a lot of fun...

Pros:
Really cool hand-building mechanic using poker dice
Strategic options allow flexibility, so it's not just Yahtzee with a saloon
Great art and components
Fast - everyone is involved, all the time
Lots of interaction without too much direct back-stabbing

Cons:
Not very poker-like, really
Theme is a tad weak

I like Dice Town so much it makes me want to talk like I grew up in the Ozarks with a third-grade education. You can get one right here:
http://www.thoughthammer.com/dice-town-p-6360.html
Posted by Matt Drake at 6:52 PM

hello... you may submit this blog to my webBlog Directory, keyworddir.info.. have a nice day!

Hey, thanks! I have been actively perusing the internet, looking for anyone, anywhere who would be willing to let me submit my blog to their directory site. Day in and day out, I've searched, and finally the day has come. I'm so excited!

Keyword is gonna need ice for that burn.

I love playing board games, but I get frustrated when some of my friends think they are more clever than the rest. It's even worse when they lose and get mad because of that!

Get the most nines, for instance, and you can pilfer the gold mine. The most tens lets you rob the bank and get a little spending money.but the town could be replaced with a James Bond casino, or mobster wars, or nearly anything that starts out with poker. It's cool enough.