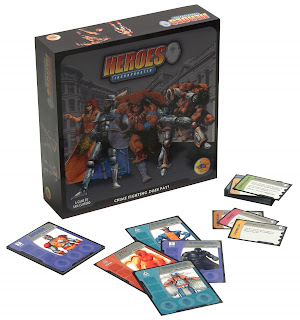 I've been looking for a good superhero game. I've seen a few superhero games from the big publishers, but the problem is, they always use licensed heroes. That's cool, and all, but everybody knows that when Hulk fights Daredevil, the Man Without Fear is going to take a hell of an ass-whipping. And way too many of these games screw up the powers, so that Juggernaut can be totally beat down by Black Cat.

Another problem with lots of the big publisher games is that they try so hard to make the powers work in a game that they have to cut the nuts off the real powerhouses, and have to make up all kinds of silly abilities to try to make Batman have a prayer against Apocalypse (yes, I do know that Batman can't meet Apocalypse outside of an Amalgam crossover).

So I was really excited to try Heroes Incorporated. It's small-press, so they can't afford to buy a license from anyone bigger than Dark Horse. And since they can't afford to use heroes anyone else has created, they had to make their own - which means they had to actually try to be original and focus on making a well-balanced game, rather than being able to tell the fans, 'hey, you can have Wolverine fight Doctor Strange' and then just delivering a mediocre, over-complicated piece of crap.

In Heroes Incorporated, each player gets a superhero team of two butt-kicking supers. You might get Thunderhawk, who flies and has super senses, or Scrap, the crime-fighting inventor, or Charm, who uses her magical abilities to bust crime wherever it rears its ugly head. And then you have to use your superhero team to roam the city and battle crime - and you have to do it better than your opponents. If you can manage to pull down a little extra media coverage, that's just gravy, because in the end, you're all competing to be the city's official supers team. Get on the news, show off some heroism, and bust some super villains to earn the exclusive contract to protect Megalopolis.

So for starters, you've got original heroes with recognizable, intuitive powers. So far, so good. And the premise works (though in all fairness, there are really only two useful premises for superhero games - beat the snot out of everyone else, or... well, this). So the real litmus for Heroes Incorporated is whether it's fun to play.

And good news - it's a blast. Every turn, crime markers will move around the city. These could represent pretty much any crime, from stealing hubcaps to corporate espionage, but the nature of the crime is not what's important. What's important is how tough they are to stop. Criminals pulling a heist at a huge tech firm are probably going to be pretty well prepared - but they'll also draw a crowd, which is great if you're trying to get a little face-time on the six o'clock news. Of course, you can also stop bag-snatchers at the old folks' home, and while that isn't quite as impressive as arresting a bunch of cyber-ninjas, it sure is a lot easier.

That is, it's easier unless (please insert drum roll when I go 'dun dun DUN!') dun dun DUN! super villains show up! Any crime can suddenly turn into a huge event if an opponent plays Warhead on it. And he's a heck of a lot harder to beat than a couple teenage hoodlums boosting car stereos. Your heroes may be hard-pressed to take down some of these villains - but in many cases, you'll want to try even harder, because lots of these guys can really punk your heroes if they don't. You might see the entire block be destroyed. You might lose some of your gear, as Berserker smashes it on the way to blasting your hero through a wall. And even if you don't lose something, you still end up wasting time trying to bash a tough villain when you thought you were going to get to kick a couple muggers around like Beckham at the World Cup, and instead have to live with the shame of having the dork with the combover who does traffic giggle about how there's a pileup on the crosstown bridge because your face is being used to clean gum out of the gutters.

The real trick to playing Heroes Incorporated is using your time well. You have a limited number of action tokens, which you need to move, play cards, or fight crimes. And sometimes it's important to use the right action at the right time - a hero can only beat down one group of bad guys every turn, so it's crucial to choose the right moment to round up a gang of YuGiOh counterfeiters so that you don't miss the opportunity to battle the Mutant League.

There's a lot going on in Heroes Incorporated. You can use cards to gain new gadgets, like jet packs or utility belts. You can play fame cards that give you a little more media attention. You can play out epic battles, or pump up your heroes, or make sure your opponents are caught on tape when they're drunk and peeing against the side of a public building. And yet, for as much as you can do in Heroes Incorporated, it's never overwhelming. There are lots of things you can do, and you have to plan a little and use some strategy, but you also just get to jaunt around the city punching crooks in the nuts.

The real draw of Heroes Incorporated is how well it executes its theme. As you traipse around Megalopolis, trying to beat your opponents to the break-in at Genicon and pulling out the stops to throw Toxica out a window, the game really does feel like you're managing a superhero team. It's fun as hell, and it does a magnificent job of making the theme come to life.

That's not to say there are no flaws in Heroes Incorporated. The biggest flaw, and the real reason this game isn't the best superhero game in town, is that sometimes, there is no possible way to beat a villain. It's really frustrating to have a bad guy land on a crime you were fighting, and next thing you know, you could roll like the devil controlled your dice, and you still can't win. This could have been fixed, and it should have been, with sacrifice cards and special abilities. Lots of similar games do this - you can play reinforcements, or break out unseen special powers, or sacrifice cards for extra points on the dice. It's not like this is a new concept, and Heroes Incorporated is flawed because it's not here. I mean, this absolutely should have been in this game.

Another downside is that, while the theme really does rock my face off, it would have been easy to make it better with more art. The super villain cards don't even have pictures of the villains. The city is kind of gray and drab. The heroes are great, and the art for them is fantastic, but I would have preferred some flashier action counters and maybe more art on the resource cards. But in all fairness, when I get a game from a publisher who doesn't have Fantasy Flight's deep pockets, and it's this good, I'm just looking a gift horse in the mouth.

But even with these flaws, Heroes Incorporated is one of the best superhero games I've ever played. It's a whole hell of a lot better than Marvel Heroes, and I would rather play this than HeroClix any day. It's fun, the theme works great, and you'll have plenty of reasons to play it again. I can heartily recommend it to anyone who likes a little chaos and a lot of theme. There's even an expansion, which I'll review once I get a chance to play it a couple more times.

Pros:
Great combination of tactical and strategic play and good, old-fashioned kickin' ass
There's luck, but not too much of it
Does a great job of letting you feel like you're running a superhero team

Cons:
Could have used more art
Definitely should have had some clever combos to beat tough villains

This is a pretty small-press game, and the best place to score a copy is probably right here:
http://www.questmachine.com/store.htm
Posted by Matt Drake at 8:18 PM

So what do you consider the best Super Hero game out there?

I am not that big into SH, but this one sounds really fun and I will be looking for this one, thanks

it's so cool!! told you as huge HEROES fan!! this game is so amazong!