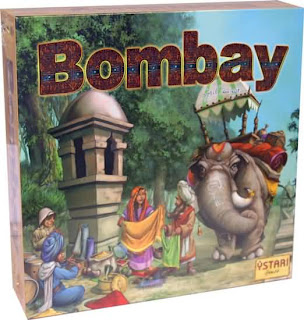 Remember when you were a kid, and you used to play pretend? When you would pretend to balance your checkbook, or get a dead-end job in an office, or refinance your house? Yeah, me too. And I think my favorite game was when I used to pretend I was a guy who bought and sold silk from the back of an elephant.

Wait, you didn't play that one? Man, I loved that. I would spend hours just pretending to buy some silk in one place, take it to another place, and sell it. It was so thrilling to get clients and pay tolls and try to get enough to build a big house. Ah, good times.

Finally someone has recreated my childhood dream. Bombay is all about riding an elephant all over India, buying silk in one place and then selling it in another place. It's really great, too, because nothing bad can happen to you outside of paying another player if you have to go through his palace to get to your next client. No fighting, no stealing, none of that awful garbage that happens in those horrible games like Descent or HeroScape. Nobody gets hurt! Everybody gets rich! What a great fantasy world.

See, there are these markets all over the map, and every market sells a different color fabric. And then there are cities, and they'll buy silk, but they pay more for one color than another. So you'll be able to walk your elephant up a road, and then buy silk! Well, OK, you probably won't be able to buy the silk this turn, because you only get to do a few things every turn, so you may have to wait until next turn, but then you can buy silk!

After you buy some silk, you can go to a city, and at the city, you can sell some silk. It's every boy's dream come true. You could get money! You might even get a client! Man, it's like they saw into my childhood and found the most exciting thing from my youth.

You can also trade some of that silk and spend a little cash and put up a palace, if you're at a place where nobody else has put up a palace. That's cool, because then you can totally charge tolls! When I was a kid, all I ever wanted to do was build a palace and collect tolls. That, and I wanted to haul silk all over the place with an elephant.

As the game progresses, you almost can't help but get richer. You'll sell your silk, and collect your tolls, and after everyone gets to be first player, the game will end. Now you can compare your pile of money to the piles of money that other people have. This is so much better than some crass game where you count kills or compare victory objectives. In this one, there's none of that scary punching or stabbing. Just honest-to-goodness mercantile work. Why, I don't think it could be any better if it were a game about stocking the back room at Bed, Bath and Beyond!

Now, some of you readers may be the kind of sick individuals who get a kick out of playing games where you kill people. That's just wrong. You should never kill people. You should sell them silk. That's way cooler, and nobody has to get hurt. Plus you might be able to make a very nice billowy dress shirt.

But I have good news for you violent types - Bombay isn't just about the most exciting thing ever, it's also a good game. If you can get past your blood-crazed tendencies and just enjoy the way the game works, it's full of opportunities for tough decisions, long-term strategies and quick deals. No, it doesn't have any of your precious gunfire, but it is a well-designed game with several different paths to success. Plus, even with five people, it goes pretty fast. Turns go by before you know it, especially if you're not that jackass at the table who doesn't plan his turn until he has to start moving, and then spends five minutes calculating permutations while the rest of you recharge the batteries in your cattle prods to wake him up and make him do something, already.

The art is also a lot of fun. It may not have robots or monsters, but it's as pretty as you would expect from Asmodee. And the elephants are ludicrously cool - you can actually stick two bales of silk (well, these are actually little wooden cubes, but they're colorful like silk) into the baskets on their backs. The little palaces are pretty darn sweet, too.

So if you like to play a game where people die, you still might enjoy Bombay. It is a good game, regardless of whether you spent more time as a kid pretending to put on power armor and blast space orks, or if you lived for those quiet afternoons when you could become a middle-management accountant, if just for an afternoon.

Cons:
This theme is nearly as boring as one where you collect tea

Ah, Dogstar Games comes through again. Here's the link where you can get Bombay and save a bunch off the retail price, and even get it shipped free:
http://www.dogstargames.com/product/ASMBOM01US
Posted by Matt Drake at 11:30 PM

I just recently found your blog when I was looking for reviews on Android, which I now own, and enjoyed it, but have only played once so far.

Love your blog, you are an excellent writer, and the content is good too, as I have a large (and always growing) collection of board games.

I was just wondering if you had ever thought of reviewing Killer Bunnies. I own it, and love it, but wanted to see what you would have to say about it. My gaming group have vastly differing opinions of the game.

Well, that sounds like a request to me! I'll do my best to get my mitts on a copy of Killer Bunnies. If Dogstar Games doesn't have a copy for me to review, I'll just write the publisher direct. Thanks for the kind words!

Well, since we're requesting...How about Wings of War?

I'll check with Dogstar Games. If they don't have it, though, the odds aren't good - Fantasy Flight is one of those big publishers that doesn't like me very much.