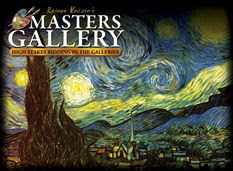 You know, I don't know why Reiner Knizia bothers with themes at all. Yeah, I've said that before. Yeah, it's a tired bit. But seriously, when you could replace an entire theme with a few summer colors, why freaking bother?

Masters Gallery is a Reiner game. That means that the theme could be replaced with monkeys, aliens, pirates, or whatever else you want. I've played abstract games with more theme. At least some of those had wooden pieces.

But on the other hand, it is a really fun game. It's a revamp/reprint of an older game called Modern Art, which was then reprinted and changed up a little to be called Modern Art (no, I didn't type that wrong). Then to mix it up a little more, they changed out the art with classic art and called it Masters Gallery, so instead of pop art, you get Renoir and Van Gogh. But really? They just needed five colors.

The idea here is that there are five different colors... er, artists. Each one has a main card, and then there's art on like 90 other cards. You play cards from your hand to show which ones you hope win, and then when there are enough cards out, the artist with the most cards on the table is worth points. The second and third place artists get honorable mention (and also a few points).

This part isn't that interesting. You just put out colors. Whoop-de-friggin-doo. But some of the color cards have special powers, like the Wonder Twins, only they don't turn into snowmen or lemurs. They might let you play another card, or make everyone play at the same time, or draw more.

And then you've got a building point scale. Initially, no one artist is going to be worth a mint, but they get more valuable as the game goes, so you want to hang onto your big points for the end, to make sure you don't have to watch a big score get racked up on Monet when all you have left is a pile of Degas (not to be confused with de gas, which is what you get if you eat at De Taco Bell).

I've read a couple people call this game a cheap filler. I think that's crap. For one thing, it's not that cheap - the cards are nice, but you're basically paying like twenty bucks for a big deck of cards that's easy to shuffle. For another thing, this is a cool game, and it can take half an hour to finish. No, it doesn't need a theme, but frankly, if the theme were replaced, you could sell this puppy in Wal-Mart (but only if you add a really big 'Made in China' on it somewhere and kill about seven hundred American jobs). It's great for a family game night, especially if everyone is willing to play it a couple times. It's fun, and it's easy to learn, and it's got way more strategy than you'll usually see in a Reiner game. When people say that games are cheap filler, it always seems so damned arrogant to me. Normal people would not call Masters Gallery filler. They would call it a fun game.

It's no big secret that I don't like Reiner Knizia. But whether or not I want to invite him to Thanksgiving, I'll tell you when I like a game, and I really like Masters Gallery. I don't care if it's an update/reprint. I don't particularly give a hoot if it has a theme worth the ink it cost to print it. I can appreciate a good game, and Masters Gallery plays like a regular card game. It feels a little like the kind of card game you play with your in-laws when you get stuck at their house on vacation, like Spades or Rummy or Canasta. It's definitely not a board game, but it's fun and requires a lot of strategy. That means my wife is going to destroy me at it from now on - she's always been better at card games than I am - but it also means I'm going to have fun while she does it.

So ignore theme (or at least ask Reiner Knizia to stop pretending he cares about theme). Masters Gallery is fun, intelligent and tricky, and as long as you have some kind of life outside board games and painting porcelain miniature dogs, it's not filler. It's just fun.

Pros:
Way, way deeper than I expected
Fun and fast, with buckets of strategy
Cards are really easy to shuffle

Cons:
Theme is completely pointless. Not even sure why he bothers any more.

As far as I can tell, Masters Gallery isn't out yet. I guess I got a prerelease copy. If I could just talk Fantasy Flight into getting me prerelease copies, man, would my gig be sweet or what?
Posted by Matt Drake at 8:54 PM

it sounds like you could make this one your self? Maybe not as with as nice as cards, but cards are cards?

I look forward to trying this or modern art just to try anther Reiner game - so far I like all of his gamesI - but to be fair I think I have only played 3 of them maybe 4?

Well, this is a good one. They're not all good, but this one is. And I suppose you could make this one yourself, but you would have to buy two or three decks of cards and get someone to tell you what was one each one of them.

I guess for that matter, you could make World of Warcraft, Magic, or any other card game, as long as you knew what cards to make. Seems like a bit of a pain to me, though.

So when are you going to tell us about your new game? We are all behind you, and waiting to hear about your adventures along the way.

I'm like a week away from whipping the tarp off Feral Instinct and letting people see what I've got. I've had a lot of great feedback and help, and I've played it until I think I've got a fun, playable game. Now I really need some outside testers, which will be the next thing. So some time this week, I should have a 'playtest my game' post.

After figuring the game out the first time through I could not believe how much strategy really comes in to play with this game.