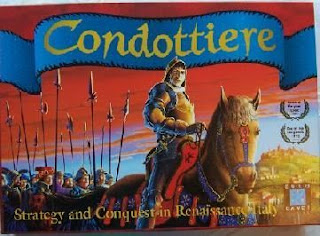 On the very cusp of Christmas, I figured it would be nice to consider the family. You're going to be spending some time around some people who might irritate the hell out of you, and you could be there a while. You might start jonesing for a game, and not be able to round up a game group for some Risk 2210. You know that crotchety aunt who always smells like filterless cigarettes and farts at the dinner table? She's not going to play Last Night on Earth. Ever.

So I had a few criteria for picking out a game to play with your family when you're stuck with them.

1. Lots of players. The game has to go over the traditional four players, but it has to be playable with only two. Because sometimes you're going to be stuck in a corner with that nerdy cousin who can't catch a football, and sometimes both sets of in-laws are going to want to play so they can snipe each other with veiled insults.

2. Neutral theme. Zombies, world domination and dungeon quests might be great fun, but they're no good when you want to play a game with your kids' grandmother, the one who always pinches their cheeks and offers them hard candy. The game has to have a theme that doesn't make anyone in your family question your soul's final destination.

3. Easy game play. Sure, you can wade through a 20-page rule book, but you like games. Your half-drunk father-in-law isn't going to read anything longer than the sports page. If you can't explain the rules to your hyperactive nephew before he lights something else on fire, forget it.

4. Still fun, even with 1, 2 and 3. I can reel off a handful of games I've played at family gatherings, and lots of them suck. And even if I once loved them, after I sit through them for the tenth time with a room full of people I moved half a continent to avoid, I tend to want to either wrap them in chains and drop them into a lake or soak them in gasoline and use them to burn down my house. And by 'them' I mean the games, not the people. Please don't burn your family and drop them in a lake.

For this review, I settled on Condottierre. I don't know anything about the FFG reprint, but from what I've seen, it looks like the same game. My copy predates that one by several years.

Condottiere takes place in Renaissance Italy. For those of you who don't have a background in Italian Renaissance history, this was a time of huge upheaval and turmoil in Italy. The city-states were always haggling, dealing, backstabbing and invading each other. They were making deals, breaking them, and warring like crazy.

Enter the condottieri. These mercenary leaders were smart, tough and powerful. They would start off fighting for the various cities, but would eventually take over. The Medici and Strozzi families are two of the most prominent legacies founded by mercenaries who decided to make Italy home. And in all likelihood, your Uncle Mervyn doesn't give a flying rat's ass about Italian history, and just wants you to tell him how to play before he unbuttons his pants and falls asleep in front of the television.

Each player is a condottiere, leading a mercenary army to try to unite Italy. You'll lead your armies around the board, committing troops where you think they're needed and backing away from fights you can't win. The board shows Italy divided into 17 provinces. To win, you have to own four contiguous provinces. Up to six condottieri can play, and you can generally finish a game in 45 minutes.

When you boil it all down, Condottiere is a bidding game. At the top of every round, you'll get a handful of cards. These cards are mostly mercenary warriors of varying strengths, and you'll use these cards to try to win battles and seize provincial capitals. In addition to the mercenary cards, there are several special cards - scarecrows, drums, bishops, surrenders, winters and heroines. Each modifies the battle in play.

Battles are played out as sequences of card play. The mercenary cards are all numbered, so if you play a 3 and Grandma plays a 4, she's winning the city. If your brother-in-law passes, he's out of the fight, and he's probably a wiener anyway, because he's compensating for something with that expensive convertible. If your usually-inattentive cousin stops picking his navel long enough to play a Bishop card, however, it doesn't matter that Granny's winning, because the bishop declares amnesty and makes the battle end without resolving a winner.

Other cards can modify a battle. For instance, winter means every card counts for 1 point, regardless of strength, unless you can add a heroine, because she's worth 10 points whether it's snowing or not. Drums double the points for all your mercs, and scarecrows are worthless, but they let you stay in the battle and still hold onto your really good cards. Plus they keep the crows away, which is important when you're trying to grow corn (maybe not as useful when you're fighting a battle).

The real kick in the pants is that everyone involved in a fight loses all their cards when the fight ends, so if you blow all your cards to take a place you really want, you'll be standing around with your pecker in your hand when the battle is for your home city (and that weird half-retarded cousin who keeps hitting everyone with his football helmet will wonder aloud why you've got your pants off). The round doesn't end until there's only one guy with cards, so if you get too aggressive early on, you don't get more cards for a long time. But then, if you don't fight when it counts, it won't matter that you have lots of cards, because the round will end before you get the chance to play.

Condottiere is a very easy game to explain and play, which is nice, because God knows your spasmodic cousin can't pay attention long enough otherwise. Come to think of it, she might be better off watching the Spongebob marathon, but good luck telling her that.

I've played Condottiere with lots of different groups. It's perfect for family, because nobody can object to history, and there are no goblins or robots. The art in my version is fantastic, though I suspect Fantasy Flight is going to give it a modern look instead of the cool faux-Renaissance look the original publishers put on it. It's easy enough to play that you can get your extended family to give it a try between games of Pinochle, and engaging enough that you can enjoy it.

In other words, Condotierre is a good holiday game, especially when your family is a bunch of misfits. And you know they are. Don't bother to deny it.

Cons:
A little thin for the gamer who wants a challenge, but perfect for non-gamer company

You can get Condottiere here, and if you pay extra, you might even get it before everyone finally gets out of your house:

I've been eyeballing this game for a while, since I love card-based games. Thanks for an insightful review.

WOW - your writing just keeps getting better. The game sounds like a winner, something worth having around and that would get played. But all the mention of the misfit family is great, just wonderful writing. We always visit my family first when in the states and my wife always gives me shit about how bad or strange my family is, and I just agree and shrug it off, then we visit her family and she realizes my isn't that bad at all, here I just say all families are disfunctional when they have to be together that is why we move out of the house and most of the time far far away - why do you think I live in Costa Rica - no ones just dropping by.

I have always told my wife that my family puts the FUN in disfunctional ( sorry that is spelled wrong it is 3 n the morning ).

From What I'm reading and what I remember, the reprint has some changes.

Nice review. And, being Italian, i like the short synthesis you made of our Rinascimento, while i was forced to study it for years at school :)