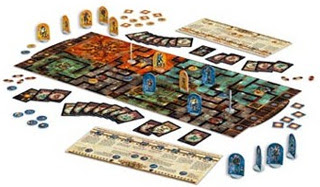 It's funny how much you can tell about a country by its board games. Take America, for instance - our games are usually intensely violent, and they usually take place someplace really silly, like in a future overrun by monsters or a fake planet ruled by evil dragons. Or take Germany, where the games are almost completely non-violent and often rather dull. You can almost picture the German game designers wearing a lot of drab colors and complaining about their mothers. And then you've got the French.

French people are just plain weird. Their games are all over the map when it comes to violence and game play - some games are so bloody, they make Risk look like Chutes & Ladders. Some games have so much luck, you might as well roll the dice, compare results, declare a winner and play something else. Some games are so completely twisted you wonder why French children don't decorate their bedrooms with human ears.

Dungeon Twister is a weird damned game. The premise is that you're locked with a team of dungeon crawlers in a dungeon created by the Archmage. The Archmage gets a kick out of watching you try to get out. So far, this is practically a Hollywood movie. Except that your opponent's team is made up of the same exact people. And the dungeon is made up of a bunch of rooms that were designed by a hamster architect that had been injecting absinthe directly into its little brain. And the freaking rooms spin.

You can also tell that Dungeon Twister is French because there's no randomizing element anywhere. You each get a deck of cards, but you can choose when to play them. This would make it a Euro game, but since the theme of the game is to kill the bejeezus out of a bunch of other people, it has to be French. No German ever would have thought of this. Any more, German people only think of games with lots of math and no killing. German exports tend to be exciting recreations of farming or delivering mail.

Speaking of cards, Dungeon Twister has a painfully cool card mechanic. On your turn, to determine how many times you can act, you play one of four cards - 2, 3, 4 or 5. You get that many actions. If you want your troll to move three times then club a goblin in the face, you'll need four actions. If you just want your fighter to pick up a shield and walk away with it, you only need two. Once you've played one of those number cards, you can't get it back until you've played all four, so you have to really think ahead. Can you get by with just spinning a tile right now, to make sure you've got enough to make a cannonball run later? Or do you need to strike now, killing two or three foes with a collection of fireballs, blades and traps, then be hamstrung when your opponent makes his counterattack?

Combat is another exercise in card management. Every character has a fight value, and when two dungeon-crawlers fight, you compare those values, and the higher value wins. You can each add one combat card to the fight, which will get you anywhere from 1 to 6 extra points of whoop-ass. But you lose that card for the rest of the game, so you may want to gamble that your opponent is going low, or if you think you're going to lose anyway, play your +0, which comes back to your hand after you play it.

There are lots of little rules to Dungeon Twister, mainly associated with the characters and items in the game. The thief can cross a pit trap by getting all acrobatic, and the mage can fly over the top of it, but the cleric needs a rope. The thief can also unlock a gate, while the fighter can just bash it open. The wall-walker can step right through walls, which can save lots of time, but the goblin can go the long way around and still beat her, especially if he drinks a speed potion. And for your dose of French bizarre, there's an orc mechanic who can spin tiles the wrong way, because God knows you can't have a fantasy game without a demihuman with an engineering degree.

The end result of all these minute factors is that Dungeon Twister can result in very lengthy turns, where you spend like five minutes planning a turn that will take you thirty seconds to execute. Your thought patterns will sound a little like this:

"OK, I could run the goblin up to the treasure chest, block with the troll and then spin the back room. I need five actions for all that... let's see if I can do just three actions, and forget the spinning. Wait, I know, for three I could move the cleric next to the wizard, but I can't heal... Maybe I'll just move the orc to here and spin that room backwards, which will let the wallwalker get past the pit trap - but the rope is only one more action away, so maybe I'll play the four...
Posted by Matt Drake at 7:05 AM

Great review as always, this is one I am really thinking of getting , so I am glad you reviewed it.

My first thought is - do the Japanese make games and what are they like. Oh those crazy french people