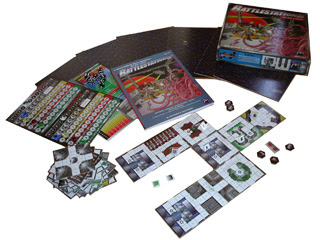 The little scout vessel is bravely battling the star cruiser around a deserted mining asteroid. The pilot (who resembles a tumbleweed) is trying to keep the ship steady as he throws it into another turn. The marine (who looks like a bowl full of earthworms) throws himself into an empty missile and launches himself into space. The engineer (a gorgeous woman, because no sci-fi epic is complete without a smokin' hot dame) is trying to evade an incoming missile by ejecting the breakfast dishes into space.

That's actually a pretty silly scene, come to think of it. I don't know why the breakfast dishes make missiles explode. I don't know about the wisdom of using a missile as a boarding device. But I know this - it sure is fun to try.

Battlestations is an exceptionally small-press game from a company called Gorilla Games. The company is Jeff Siadek and his brother Jason, but I'm pretty sure it's mostly Jeff, which means that if it was any smaller it would be run by semi-intelligent lemurs. In Battlestations, you do all that crazy stuff in that opening scene. You fly a spaceship around and battle bad guys, but the action takes place in the ship at the same time that it's occurring in space.

This clever idea is accomplished by using different maps. The ship-to-ship action is tracked on a black hex grid. The actual operations of the two ships, including piloting, firing cannons, fixing drives, scanning and targeting, and everything else, occurs on maps showing the insides of the ships. And the really cool thing is that the ships are made up of 5X5 square grids depicting different stations on a ship - the science bay, the bridge, the engine rooms, and the cannons are all individual pieces, and you build a ship by putting in all the necessary components. This means that you can use one set of cards to make a huge variety of ships.

This dual-action nature of Battlestations means you can do just about anything. You can board an enemy vessel, sabotage the science room, then launch yourself back to your own ship in the enemy's boarding missiles. You can fire a cannon blast that blows clean through the engine room in a massive hull breach, then have your science officer scan the enemy ship to find the hostages. You can use the heat from the engines to microwave some popcorn and watch Gilligan's Island reruns on the view screen in the bridge.

Battlestations also includes character generation rules that would do a light RPG proud. There are six different alien races in the base game, and more in the expansions. Aside from the afore-mentioned tub of worms and the leafless shrub, there are also rockpile aliens, six-limbed starfish and bug people.

[Tangential rant: What is it with space and bugs? Why are there always smart bugs? Why can't we have intelligent marsupials instead of intelligent insects? Hell, how about intelligent duck-billed platypus people - those freaky-ass animals look like aliens anyway.]

Battlestations is a hybrid game. It combines a tactical space simulation with a character-based RPG. I played this with my kids, and they would have conversations in character. It was really irritating, because their characters were even more retarded than they were, but they were having fun and their mom was listening, so I had to go along with it (who am I kidding, I was totally doing it, too).

Your characters can earn prestige, money, ship parts, experience, and otherwise develop as science fiction characters. Just because you don't have to explore your motivations doesn't mean this isn't role-playing. You get attached to these knuckleheads, give them names, and shout at the other players when their stupid maneuvers get your guy shot.

The actual mechanic of Battlestations works great. You roll some dice to attempt a task, and if you're good at it, you can reroll some dice. If you spend luck points, you can roll more. If you roll high enough, you succeed.

The Battlestations book is way too thick to discuss in lots of detail, so I'll sum it up. There are rules for dozens of skills, lots of weapons, a bunch of different ship segments, and page after page of scenarios. In essence, the game is too detailed and personal to just be a board game, and too tactical to just be an RPG.

There are several expansions for Battlestations, and they each have a different theme. Each expansion comes with a book, some new space tiles, new character pieces, and whatever else you might need. There's one expansion where you fight an intergalactic war, and another where you take the fight to the pirates. There's even one where you continually rescue stupid walking fungi as you tool around the galaxy. I don't have all the expansions, but I sure wouldn't mind picking up the ones I'm missing, because this game is fun.

The saddest thing about Battlestations is that the components are total crap. The illustrations in the book are fantastic, but the art on the game pieces is uninspired computer graphics. The boards all get dinged up at the corners if you look at them sideways, and the character markers have to be cut out and glued together. It's like they spent their whole budget for the rules and didn't have any left to spend on the pieces.

I don't care about the aesthetics in this case. My kids don't either. We would, but we're too busy trying to get just a little more power out of the engines, launching a boarding missile, hacking enemy battlestations and otherwise getting a huge kick out of the game.

Battlestations is so good, it's all sold out everywhere. If you get a chance to pick it up, take it.
Posted by Matt Drake at 10:14 PM

Matt! One of the greatest ways to play this game is to have two groups of players (3 or 4). Each group plays a starship crew and you simply fight it out among an interesting chunk of space that has a couple of asteroids and maybe a derelict space station on which to explore for bonuses etc.

The tactical space combat game is fun and rich, while the teamwork mechanic and the starship maps are really neat. Boarding an enemy vessel with a few robots and a marine is a total riot. Watching each team struggle to synergize is great fun and is a real party game type thing.

That does sound like a great way to play this. That would be a ton of fun.

Oops! I forgot to say. Excellent review as usual! I wish I had Drake review for every game available. Can you get on it right away? ;)

Great review, never heard of this one, but now I want to get it, go figure.