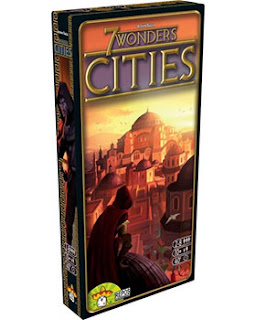 There are some games that simply beg for expansions. You play them a couple times and then go, 'man, this would be so cool if there were just more of it!' Those kinds of games may be good enough on their own, but really only shine when you can add more to them.

7 Wonders is not one of those games. It's a good game, one you can play in a short amount of time and engage your brain just enough to keep conversation flowing without getting bored. But it's also completely playable right out of the box, and when you play, you won't be complaining about needing something else to make it interesting unless you just don't like the game.

However, just because something is not needed does not mean nobody will make it. The publishers of 7 Wonders have actually done this twice now, first with the Leaders and now with Cities, and while both expansions certainly add new stuff to the base game, it's debatable whether Cities actually adds any play to the game.

On the surface, it would seem like new mechanics might zap a little energy into the old game. For example, you can go into debt now and end the game with negative money. You can also get all diplomatic and skip the battle phase, allowing you to ignore the military escalation part of the game completely. This is great if you've always felt like the warfare was too powerful, but not as big a deal if nobody else at the table gives a rip about building giant armies.

The real point of adding the Cities expansion is to add the city cards, which show up here and there and add virtually nothing to the game in terms of playability. You won't have to rethink how you play this game. You won't change your strategy to accommodate the shifting face of the future. You'll just play the cards when they come past you, the same way you did before. So in terms of making a good game better, Cities doesn't really provide much in the way of a persuasive reason to drop the coin for it.

However, if you like to play 7 Wonders in great big groups, then Cities might be a very important expansion, because now you can play with eight people. Not only that, but you can play in teams. If there's one good reason to buy Cities, this is it - the ability to play 7 Wonders with more people than I am ever able to put together in one room.

I've been dancing around my actual opinion of Cities for the entire review, and it's time to stop dancing. For one thing, my feet are tired, and I'm all sweaty. I need a drink, and I came to this bar to pick up chicks anyway, not to hop around like a frog on a hotplate. So here's my opinion - I cannot come up with a single reason to buy Cities unless you have a really huge family. I don't want to play in teams. The city cards hardly add anything interesting. The game is just as good without the expansion, and while it's great to see a couple new ideas, they didn't need a whole expansion to do that. The diplomacy could have been in Leaders (an expansion that actually did make 7 Wonders better) and the debt hardly ever comes up. The city cards are just normal cards that do a little more.

If you're just looking for a way to part with some money, Cities might be a good solution, because you can expand your game without having to actually change the way you play. If you want an expansion that actually makes the original game more inviting, Cities is just going to piss you off. It's not bad. It's just not any better than the original.

Pros:Adds a couple new ideas
Some new cards
Now you can play with eight people

So you may be wasting money if you buy Cities, but the good news is that you'll only be wasting 20 bucks if you get it here:
http://www.coolstuffinc.com/p/164905
Posted by Matt Drake at 6:41 AM

"I don't even know eight people."

Ha ha, ain't it the truth--seriously, who ever gets to play a board game with 8 people?

i like cities then leaders. the peace token forces you to consider left left and right right neighbors. you can never be complacent that one of your neighbors is not doing military. also the cards that causes debt tokens affects everyone. it adds more interaction.

I play 7 Wonders with 6 or more almost every time I play. It is easy to teach and has a bit more depth than, say, Apples to Apples. It has become my go to "party game that's not really a party game."

I think the teams idea has merit. One of the flaws this game gets in reviews is that if you play with 6+ people, you might as well be playing a separate game from 1-2 people on the other side of the table, which makes sense.

But if you had 6-8 people and you had 3-4 teams of two, suddenly the interaction between players rises considerably and you then have to consider all of your opponents again.