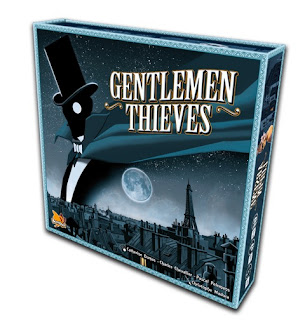 The last game I reviewed from Asmodee was River Dragons, and I didn't entirely care for it. So tonight, to flip it around, I want to review a game that is a real wing-dinger (wing-dinger, incidentally, is from the latin 'Wingus Dingus', which literally translated means 'impressive phallus,' and is thus inappropriate for use around small children). This impressive game is called Gentlemen Thieves, and features characters who are apparently a big deal in France but are virtually unknown among the uncultured plebes who read (and write) this website.

Gentlemen Thieves recreates the adventures of Arsene Lupin, whose name I have probably spelled incorrectly because I lack the capacity to create umlauts and accent marks on my computer (that, or I lack the capacity to give enough of a crap to figure out how to do it… yeah, it's that one). I had to look him up, and when I did, I discovered that he's like the French Sherlock Holmes. Only instead of being a crime-fighting genius, he's a cat burglar. And instead of being addicted to iocane powder or whatever, he's, I don't know, French.

So anyway, in the game, you each take on a secret identity, one of the people in the Arsene Lupin novels, and then you do crimes. You'll be split into teams, but you won't know who is on your team, and the team that successfully completes a heist will split the loot and get paid. The other team gets to grumble in French.

The interesting part here is that the teams are split according to color, but you're the only one who knows what your color is. So nobody actually knows, when they place equipment at a crime scene to try to help the robbery happen there, if they're helping you or stealing from you. This is important to the game - you have to bluff and lie and throw your opponents off your scent if you want to win, because otherwise you'll get stuck on one team with everyone else on the other and they'll all beat you out of the best crime scenes.

This bluffing element is the central feature of Gentlemen Thieves, but lots of different pieces are moving around to make this part trickier. You've got special tiles you can activate, different colors of equipment, and an anonymous score tracker. The person choosing teams changes every time anybody successfully robs something, so everyone gets a chance to screw it all up for everyone else. Sometimes it's even worth it to throw the heist to the other team, just to make everyone think you might not be the winning color, after all.

Gentlemen Thieves isn't a particularly involved game. It's not overly complicated or long. You can explain the rules in five minutes and finish the game in another thirty. But it's an intense thirty minutes, because every time you play you're trying to both further your own goals and confuse everyone else, and those goals are often directly opposite each other.

Of course, it's also a dead-sexy game, because it's from Asmodee. The box folds open and the lid becomes the game board, and the art on every part of the game is brilliant. The different elements are incredibly clever, and everything works together like a well-oiled machine. Because there are always five thieves, the game plays just as well with two players as with five. You don't have to know anything about fictional French burglars to enjoy this game. I can prove it, too, because I don't know anything about fictional French burglars, and I enjoyed Gentlemen Thieves.

You know what? I don't even know when this is coming out. I really need to review Kemet, because that one, at least, is one shelves somewhere.
Posted by Matt Drake at 6:37 PM