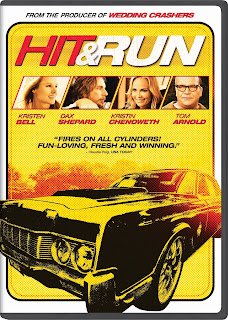 I have a total man-crush on Dax Shepard. I also have a regular crush on Kristen Bell. I would really love to be friends with both of them so I could hang out at their house and tell stupid jokes to Dax Shepard, who in my imaginary world would laugh at them and then grab me a beer, and while he was out of the room I would pretend not to be terrified that I would say something moronic to Kristen Bell just to fill the dead air.

So even though Hit and Run looked kind of like a romantic comedy, I wanted to see it because it has Dax Shepard and Kristen Bell. I'm pretty sure those two could do an actual romantic comedy with no action scenes and just crappy date-movie antics, and I would still watch it. I wouldn't admit it, though.

Turns out, Hit and Run wasn't just funny with an element of romance. It also has car chases, gun fights and brawling, and one particularly awesome scene where the very likable bad guy steals an abusive asshole's dog after making the muscle-headed jackass eat kibble.

The story behind Hit and Run is interesting enough to be the kind of movie that Vin Diesel could ruin. An ex-bank robber in witness protection leaves his comfortable backwater of a town to take his girlfriend to a job interview in Los Angeles, where the guys who he put in jail (and who got out) are waiting to cause him considerable consternation. You could put The Rock in this movie, and it would just be a bunch of gunplay and vehicular manslaughter, with occasional mugging for the camera and showing everyone how enormous his neck is. Instead, Dax Shepard makes it light and funny even as people are shooting and punching and causing freeway mayhem.

There are loads of little things that make Hit and Run more fun than it would have been if someone else had made it. There's the gay highway patrol officer who develops a crush on the bumbling US Marshal, the obsessive tool of an ex-boyfriend who chases his girl to the big city, the lecherous college administrator who knows she's never going to amount to anything more, and a supporting cast of goofballs and hardcases that is sure to entertain.

Unfortunately, that romantic angle still plays in, but since the romance is between Dax Shepard and Kristen Bell, it's actually thoroughly palatable. I'm not above some mush in a movie - don't tell anybody, but I liked Love Actually - but I'm not usually this interested in the obvious chick-appeal part of a movie like Hit and Run. But when these two do it, it's fun, even when it's a little sugary. They never take themselves too seriously, even when they're dead serious, so while I personally could have done without the extended cuddling and protestations of adoration, I thoroughly enjoyed the movie even though, technically, it's a romantic comedy.

There were plenty of ways that a weaker cast or less capable director could have totally ruined this movie, but the creators of Hit and Run did an outstanding job of putting together a fun action/romance/comedy that entertains without trying. It's not some powerhouse emotional roller-coaster or high-suspense thriller, and it's not going to wind up in anyone's pile of favorites-of-all-time. But if you're looking for something that will appeal to just about anyone, with some laughs, some kick-ass car chases, and some excellent casting, rent Hit and Run and enjoy an amusing romp.
Posted by Matt Drake at 5:36 PM

Sounds great man. I'll have to check this out when we have chicks over.