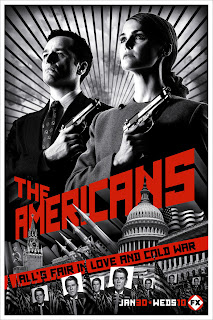 You kids today don't know how bad you have it. Why, in my day, we had real spies, and real threats, and we were damned sure we were all going to die. And we kind of loved it, because it spawned the coolest genre of movies - the cloak-and-dagger. But ever since the Cold War spun down and Clinton decided we didn't need the CIA, the entire spy movie genre is stuck chasing people of Middle Eastern descent. Back in the 80's, spies were saving the world. Now they just save middle-income suburbanites and corporate interests. We had Red October and Scarecrow & Mrs. King; you have Covert Affairs and Burn Notice. I miss those cloak-and-dagger backroom deals and knowing that one wrong move means the end of civilization as we know it.

Which is why I was so excited to watch The Americans. It's old-school cloak-and-dagger, but updated and spun on its head. It's about a couple of spies during the height of the Reagan-era Cold War, and they're husband and wife, but the real trick here, the thing that never could have happened in 1985, is that the protagonists of the show are the Commies. They're deep-cover secret agents working to undermine the American government. They've been here for decades, they have kids, they speak flawless English - and they steal military secrets and assassinate enemies of the Party. This show never would have worked in the 80's, which is one reason I am so glad to see it now.

See, in the 80's, when we absolutely HATED the Soviet Union and people were actually patriotic (as opposed to this slipshod jingoism that makes people sing 'Proud to Be An American' and put ribbon magnets on their cars), nobody but nobody rooted for the Rooskies. James Bond put bullets in Soviets - except the hot female agents, because he put something else in them. They were the biggest villains we had ever known. Bigger than Hitler, because at least Hitler wasn't in a position to nuke the whole planet to glass.

Today, though, we just don't see the world as black-and-white as we did then. Today we have to live with the fact that our own government is taxing the piss out of us to pay off rich assholes who ripped us off. We may not be too fond of Al Qaeda, but we're also supposed to understand that most Muslims are actually decent people, even though we're blowing holes in their home countries. Our heroes are flawed, often outright villainous. So now, we can watch a TV show where sworn enemies of our homeland evade capture, commit murder, and steal our secrets - and we can hope they succeed.

Of course, it's also easy to watch a show like this when we know that the USSR didn't win the Cold War, we were never invaded or nuked, and in the end it was all mostly smoke and mirrors. When we know how the story ends, it can be fascinating to see how the other side played it. In the 80's, when The Americans takes place, we were too uncertain to root for the other side. Now we can just look at them as people doing an interesting job.

One of the best things about The Americans, outside the fact that it never could have been made twenty years ago, is the statement it makes. There were spies doing spy stuff all over the place, the threats were considerably more terrifying, and yet we would have staged a revolution if Reagan had told us he was tapping our phones. Take off our shoes at the airport? Only at gunpoint. And yet now that the world is safer than it was, when we have the audacity to believe that it's the president's job to keep us safe, we're fine with surrendering basic freedoms that would have inspired a bloody coup in the 80's. And the most ironic thing is that had the Soviets decided to really screw with us, they wouldn't have sent a half-dozen religious nutsacks with rudimentary flight training. They would have sent FREAKING MISSILES. We had a real threat then, one that scared all of us all the time. I'm less scared of Al Qaeda than I am of an angry chihuahua.

But you're not here wondering how I feel about the political undertone in The Americans. You want to know if the show is worth watching. And I am happy to report that I like it a hell of a lot. It hits a perfect balance where it's serious without being too dark, fun without being campy, dramatic without being a total queen about it. Keri Russell plays the wife, and even though she always seems like she's either angry or about to cry, she is pretty darn easy on the eyes. The real star, though, is the husband, a dude I've never seen before but who should be a household name in a few years. He steals the crap out of every scene he's in, and he's a fascinating mix of morality and ruthless determination.

Plus there's all that awesome spy crap. There's the umbrella with the hidden poison knife in the end, the clock with the hidden transmitter, secret codes that don't appear until you soak them in vinegar. There are stakeouts and tails, disguises and seduction, knife fights and gun play. I love a good spy show, and I really love 'em when the stakes are high. When a misplaced word or a botched dead-drop means the world expires in a fiery meltdown, and when the bad guys are just as well-funded and professional as the good guys, then you've got the kind of tension that makes The Americans a pretty darn kick-ass show.

I wouldn't normally review a TV show after only three episodes, because I generally like to wait and see if it can maintain. But this one is pretty damned cool, and if you have any kind of On Demand service for your television, you should be able to get caught up. If I tell you about The Americans a year from now, it could be hard to find the reruns. It's on FX, so if you have cable and like spy shows, get up to speed and see how secret agents did it back in the good ol' days.

My DVR missed the pilot, so I haven't had the chance to watch. I'm looking forward to it even more now, though.

Also, I'd like to point out how the YOUNG KIDS today have no idea what it was like during the Cold War. I just got the tail end of 70's and 80's myself, but even then I knew it was some scary shit. The younger people today seem to think it was some cartoon with a forgone conclusion and wonder why us older folks flip out over people who want to kill us because we lived in a time where WE COULD ALL DIE IN SECONDS.

yeah, I grew up in the 80s and didnt expect that I would live to see 2013, let alone without a constant threat of global anhiliation.