Board Game Review - City of Horror 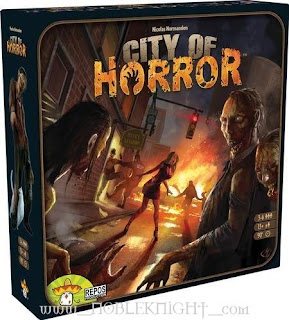 It's time for another zombie game review!

(I wonder if other reviewers get as many requests for zombie game reviews. Does Tom Vasel get hit up to write about zombie games every three weeks? Does that binswanger who does the flashy video reviews get zombie games thrown at him like confetti at a parade? Is it just me, or is everyone getting buried in games about the walking dead? And is there no other theme we can drive into the ground, hopelessly abused, until we're sick of seeing even the fun zombie games? If a zombie game falls in the forest, will it still be a boring, tired theme that desperately needs to be replaced with SOMETHING ELSE?)

The topic of this week's review is a game called City of Horror, in which you and a bunch of friends compete to stay alive while zombies eat almost all of you. It's not a zombie-killing game, or even a zombie-surviving game. It's really a game where you bribe your friends to kill your other friends, strike allegiances and then screw the people who saved you.

It's actually very fun. It didn't have to be a zombie game to be this fun - it could have been outer-space aliens, or parasitic fungus creatures, or fourth-graders on energy drinks (that's a seriously untapped market - if you've ever volunteered in a fourth-grade classroom after recess, when all the kids smell like stale sweat and dirty Twizzlers, and seen them get cranky because they need a nap, you know how terrifying they can be). But it is a zombie game, I think because Nazis as a group are now protected by the ACLU.

Every building has a certain number of spots, and every turn, you have to move one of your people and hope there's room so you don't get stuck in the street with the zombies. You have to scrounge for drugs and food and guns, and you have to share with your friends - but there's never enough to go around, so there will be some politics.

RALPH: Oh, man, zombies are going to eat either my mom or Bob's bookie. Anyone want to team up with me to vote that they eat Bob's bookie?
GERTY: Why would we do that? I hope you both get eaten, because you made me stand outside last turn and my little boy got his arms torn off.
BOB: Ralph, I get two votes. There's no point in voting. You can't win.
RALPH: If I vote for my mom this time, and don't give you any heat, will you help me out when it comes time to eat Gerty's other child?
BOB: No, seriously Ralph, it's a non-issue. I have two votes. You have one. Your mom is dead.
RALPH: Gerty, help me out here. I'll give you this antidote.
GERTY: Ralph, are you high? I'm not in the church. I can't vote.
BOB: Ralph, dude, your mom is toast. Stop flailing.
RALPH: Hey! Debbie! Help me out and vote for Bob's bookie!
DEBBIE: Shut up, you idiot. I'm not even playing. I'm trying to watch Matlock.

The voting phase is all kinds of brutal. There's a ton of choosing who gets to die, and you'll see a lot of arguments that point out how much better someone else is doing, to try to throw your friends under the bus. It all comes down to pointing fingers at each other and hoping you didn't catch the short straw, and that means nice people tend to win this game, mostly because nobody wants to pick on the nice people. I doubt I will ever win this game.

After four turns, the National Guard shows up in helicopters and evacuates everyone who is still alive. Presumably they also shoot all the zombies, but that part is sort of vague. They might buy all the zombies Hostess pies so Spider-Man can web them and hang them up in front of the police station. It really doesn't matter. But it is fun to picture all the zombies getting distracted by apple pies.

(If you don't get the Hostess pie/Spider-Man reference, ask a nerd who read comic books in the 70s.)

City of Horror is an interesting social experiment, if nothing else. It's interesting to wonder if this is how actual live-or-die encounters would go in real life - would your best friend force you out the door to save a crippled old lady? Would he kick you out to save himself? You hope not, but let's face it, you'll never really know. I would sleep with one eye open, if I were you.

If you're a fan of games where social interaction is more important than making the smart play, and you're not tired of zombie games yet, you might really like City of Horror. I had a great time, though I don't see a scenario in which I can ever win the game. I enjoyed the backbiting and deal-making and underhanded politics that went into making sure the toddler on the tricycle died before my jaded businessman. The art is brilliant (it's from Asmodee, so that's a given), and the rules are straightforward and easy to grasp. Which is more than I can say for my aging comic-book references.

Pros:
Excellent social interaction
Massive body count
Get to know which of your friends are real bastards

Cons:
Cardboard standup zombies (not that I need any more plastic zombies)
Ye Gods! Not another zombie game!

If you're not tired of the zombie-game craze yet, you can get a copy of City of Horror at Noble Knight Games:

THE TIRED UNDEAD
Posted by Matt Drake at 5:41 PM

Funny, here in Europe we dont have that many zombie games (perhaps three, including this one and Zombie Munchkin). Probably because Walking Dead is only availible on Pay per view.

"(If you don't get the Hostess pie/Spider-Man reference, ask a nerd who read comic books in the 70s.)"

I am north of 40, and I appreciated that reference. Took me back.

Heh, and my first thought when I saw the title was, "oh man, not another zombie game."

By the way, your Mage Wars review talked me into buying the game! Which is just as awesome as you said. Thanks!