Well, will you look at that - my old man to the rescue. I was all 'man, I haven't written anything tonight' and 'I have stuff to do' and 'man, I am one lazy son of a bitch.' And then I open my email and there it is - a review by my dad! 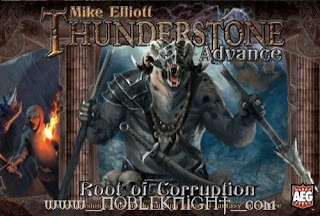 Still not ready to give it a rest.

We’ve all had that moment when we thought, “Oh, for crying out loud!  Would you give it a rest!”  Most often it’s when someone is droning on and on about a topic you have absolutely no interest in, like the guy who wants to talk without interruption about his fight with his girlfriend.  For gamers, maybe it’s the latest variation of Monopoly (there are HUNDREDS of versions of Monopoly, including pet dog versions, the Simpsons, the gay version, and, well, more than any genuine gamer, who believes one was adequate, wants to ponder).  There are several games that I think publishers should quit trying to wring another nickel out their topic and “give it a rest.”  I was beginning to have some thoughts about this with Thunderstone, and when Root of Corruption arrived at my door I had those vague thoughts waft through my mind.  And then I opened the box.  I just have to hand it to AEG, they continue to come up with great innovations that really work and add more interest and fun to Thunderstone.

The first thing you see when you open the box is a folded gameboard – it’s big!  My cynical nature was a catalyst for those “oh, no, not a folded-map-that-will-never-lie-flat-on-the-table game mat!”  Visions of SPI.  (When a cat jumps on your game of USN, those folds lead to disaster.)  But go ahead and set that aside and tear the shrink-wrap off the cards.  There are some freakin’ cool cards here!!  And again, the artwork is awesome.  (Not like that sissy artwork in that other deck-building game.)  Do those guys at AEG lose sleep over thinking up new cards?  OF COURSE THEY DO!!  Well, after opening a few of the shrink-wraps, my cynicism was gone.  I was ready to get some friends around the table and get the cards into play.

You can’t hit a homer with every card, and from my old grognard perspective, some of these cards range from silly to down-right stupid, but then I’m an old grognard and not your average Thunderstone player.  (I know some guys will love the Moonclaw hero, but it looks pretty silly to me.)  But for a few exceptions, I really like the majority of the cards in this expansion.  In fact, in most my reviews I only single out a few cards for “honorable mention,” but as I sit here and look at all the cards I’ve set apart for honorable mention, I know I can’t list them all or I’ll lose you before the end of the review.  So I’ll pare it down.  Point is, there are a lot of awesome new cards AND concepts in this box.  So let’s get to the cards:

Treasures: First off, Gold Hammer.  (First thought when I saw the card was “Maxwell’s Silver Hammer,” and if you know what that is, you’re dating yourself.)  Useful in the dungeon and in the village.  Sweet treasure.
There are two shields you find on the dungeon floor; very useful and you’ll be happy to pick them up.
Then there’s the Immolation Orb.  It’s kind of like throwing a white phosphorus grenade.  It’ll take out a lot of monsters, but it takes one hero of level 1 with it.  (If you didn’t know, you really can’t throw a wp grenade further than its bursting radius.)  It can be a mixed blessing.

Spells: Circle of Protection definitely gets honorable mention.  I bet someone really did lose sleep thinking up this card.  It cancels some very bad things that can happen.  Very clever.

Items: LOTS of good stuff here!  To mention just a few: Elven Waybread = Lembas.  About time.
Mind Control: A card that promotes player interaction – not that the other player will appreciate it when you play this card in front of him, but it’s a cool card.  It forces the other player to fight a specific monster.  Play it on your wife in a friendly game, and you could end up on the sofa for the night.
Tincture of Victims: This is a POWERFUL card.  It grants Attack and Strength points, and converts Magic to Physical Attacks.  But it can also add a curse card to your deck.  Well, I like it.

Monsters: Lots of curses comin’ your way!  Djinbound: Not all that powerful, but they’re all a pain to take out.
Elemental Earth: Level 3 and look it.  Kind of like Thunderstone Panzers.  They hurt you every time.
Royal Guard: For some reason beyond me, they all sap the strength of all heroes taking them on.  I suspect it’s their b.o., but I can’t say with any authority.  I haven’t played them in a game yet, but they might elicit a groan when one is turned up.

And of course, the Heroes: Honormain Gallant: Every time he goes to the village or enters the dungeon, you have to “discard 1 card or destroy a disease.  I’m puzzled.  Does this mean he has tuberculosis (ala Doc Holiday) or that he’s overdosed on vitamins?  He’s not my best friend.
Profaned Acolyte: Whatever this poor sap does, he gets a curse.  Next expansion we need a lucky rabbit’s foot to counteract these curses.
And my favorite in the box – The Silvertongue: He’s kind of weak as a fighter, but he can pull down gold, attack points, strength, and cards.  Every deck needs this guy.

In the box you also get new cards for all the previous “Ambushers.”  Thoughtful of them.

Now about the folded-map-that-will-never-lie-flat-on-the-table.  This is a new “game-mat” for the siege rules that come with Root of Corruption.  In honest fact, you can’t get it to lay flat on the table.  Time to pull out the plexiglass.  If you’ve followed my reviews of previous Thunderstone games, you know that the only one I gave a less-than-enthusiastic review was for Thunderstone Siege.  If it’s a siege, you shouldn’t need light.  But this time I’m more intrigued by these rules.  For one thing, Thunderstone now has a cooperative rules set – how cool is that?!?  If the monsters get inside the walls, they pour in and all the players lose together.  I love this new twist to the game.  And,  what if the monsters are coming in beneath the walls?  It could happen.  Then you need light to fight in the tunnels.  OK, I’m stretching, but I do like the rules here.  Unfortunately, I don’t own a sheet of plexiglass.

And one last work that’s become kind of a trademark of my Thunderstone reviews, when you buy this expansion you get yet another large box that’s three times larger than necessary to hold the new cards.  It’s like AEG doesn’t get it, EVERYONE WHO BUYS THIS EXPANSION ALREADY HAS A WAY BIGGER BOX TO HOLD THESE CARDS!  Well, I’ve been carping about this since my first expansion review and they don’t care.  So now I have to find room to store another Thunderstone box.

Pros:
Continues to turn out great artwork.
New concepts that really work.
Blends in great with your other Thunderstone Advance cards and game play.

Cons:
OK, I HAVE to come up with some negatives.  Let me think about this.
The siege mat doesn’t lay flat.
The box (sigh) is way bigger than needed for the cards.  Still.
OH!  I have one honest complaint!  My cards were all curved from side to side, so they don’t stack well in a deck with my other Thunderstone cards.

I found a copy of Root of Corruption at Noble Knight Games. You can probably find it cheaper somewhere else, but it's real easy to get a picture from their site, and like I said in the intro, I'm lazy.
GET A GAME OR SOMETHING
Posted by Matt Drake at 4:55 PM