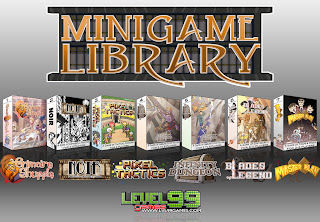 Oh no! Not another road trip!

Do you love games, and just hate when you have to leave your house and all those wonderful games? Well, we want to introduce you to a wonderful new product, designed just for you! It's the Minigame Library, and you're going to love it!

The Minigame Library delivers magnificent games that you can play any time, whether you're driving down the highway at 70 miles an hour or sleeping in the car while a bear shreds your tent.

Boring night at the in-laws house? Liven up any party with Grimoire Shuffle, a team game for either 4 or 6 players where the board shifts all the time and every player has special moves! Your wife's mom will hate you forever if you don't eat her horrible lasagna, but she'll forgive you when you break out this hilarious game of high-spirited hijinks!

Of course, we couldn't call it a library if we only had one game, so we added Noir, the game of sliding cards and deduction. Two players face off in this hunt to flush out your opponent's secret identity, and the only way you can do it is to slide cards around and see if the other guy says 'yeah, that one is me!' Add another player or two and try a whole different game! Literally, the rules are completely different.

So how much would you pay for a box that had two great games in it? If you said 500 dollars, you're insane! Nobody would pay that! But if you said 100, you're STILL too high! The Minigame Library can be yours for just 60 dollars (plus shipping and handling). Amazing!

Too good to be true? Not yet! Because if you act now, we will also add Infinity Dungeon, a game so stupid that just opening the box will make you a little dumber! It's like a role-playing game that you play with cards, especially because nobody wins! (Technically, the rules say that the person who had the most fun wins. Sadly, that means nobody wins.) You'll cross a dark room full of pit traps using a laser blaster and a pirate ship, and make sure you steal the garden gnome or... There is no or else! Not only is there no reason to try to win this game, there's not actually any reason to play in the first place!

Now how much would you pay? Don't answer yet!

We know how much you love games, so we just kept shoving them in there. For those times when you've got a reasonable good-sized tabletop and half an hour you don't want any more, you can play Master Plan! Become a comic-book villain on a death-race TV game show, and beat your opponents to the trophy while avoiding bombs and pit traps! Yes, we added more pit traps! This game is at least not stupid, though it does get a little slow, but you'll probably love it because it beats the hell out of getting eaten by bears!

All these games can be had for the low, low price of just 60 dollars (plus shipping and handling), but we're not done yet! Call in the next ten minutes and we'll add Blades of Legend, a game designed for people who have a lot more friends than I do! At Drake's Flames, we hope you'll really like Blades of Legend, because we don't have enough gamer friends to play this wild hidden-identity game! And we've been sitting on this review for almost two months as it is, so we're writing it anyway!

What an amazing deal! Act now, and you can get Grimoire Shuffle, Noir, Infinity Dungeon, Master Plan and Blades of Legend for just 60 dollars (plus shipping and handling)! That's five games for the price of one! Or two! Maybe! I mean, they are card games. Those aren't usually sixty. Those are more like 20 or so. So maybe it's five games for the price of three! Yeah, we'll go with that.

But wait! There's more! We've gone flat-out buck-wild crazy, and we're adding one more game! Get your hands on the Minigame Library, and score your own copy of Pixel Tactics! We've saved the best for last, because Pixel Tactics is pretty kick-as! This two-player, head-to-head game of smart plays and smarter plans is the highlight of the Minigame Library, and the best candidate in the box for the game we could sell without all those other games! But you can't get it on its own, so pick up a copy of the Minigame Library and buy five mediocre games and one great game for the price of three decent games!

(Offer not valid in Wisconsin or the Giza Strip. Well, if you want it that bad, maybe they'll ship it to you. I'm just the lawyer. I am also required by law to tell you that some of these games are fun, at least one is too stupid to have ever been printed, and one is downright bad-ass. The idea of putting six games in one box is pretty cool, but it would be even cooler if they were all more awesome. If 99 Designs sells Pixel Tactics by itself, pick it up, because it's pretty wicked. The rest - you could take them or leave them. Especially Infinity Dungeon. Leave that one, for sure.)

2-12 players, depending on the game you choose

Pros:
Really cool idea, putting six games in one box
Some of the games are actually OK
Nice quality cards and some entertaining art
Pixel Tactics was kind of awesome

Cons:
Doesn't seem like a great deal when you're selling me games I don't want
Infinity Dungeon is dumber than a bag of hammers

If you want more information on the Minigame Library, check out the 99 Designs site at:
http://www.lvl99games.com/?page_id=1459
Posted by Matt Drake at 7:13 PM

I could hear your review as if spoken in an adman's voice in my head with its bombastic crescendos accenting every point. Funny stuff.

Pixel Tactics is a $10 add-on to the new BattleCON expansion kickstarter. I'm already planning to get the B.C. expansion. Is $10 worth it for just Pixel Tactics?

Oh, absolutely. Pixel Tactics is a very solid game. Ten bucks is a great price for it, too.

Thanks! I have added it to my pledge. Oh Kickstarter, you are such sweet, indulgent poison.