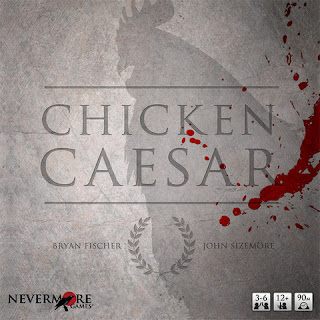 Yeah, you read the title right. The name of the game is Chicken Caesar. It's a political game. About chickens.

I can only imagine how the idea came to the designer. He and his girl are sitting in a restaurant ordering dinner. Being a man, he is ordering steak, maybe beer, possibly with a huge baked potato. His girl, on the other hand, asks for a salad. 'Chicken Caesar,' she tell the waiter, and the dude has this momentary flash of what he thinks at the time is brilliance. He thinks about it all night, is too distracted to pay attention to his woman, and then ends up sitting up all night making a game about roosters in the Roman senate.

It should go without saying that the theme is a little silly. Various families of chickens scratch and claw to claim the best seats in the senate and establish family legacies. Foxes eat many of these chickens, and when one of them does manage to become Caesar, that poor bastard winds up in the farmer's cook pot. Oh, and they wear togas.

But what is not immediately obvious is that the game is actually very good. This is especially tough to spot when you read the rules, because while they definitely describe how to play, they do a horrible job of telling you what you're actually doing. When you get all the way through the rules, you'll have to go back and read them again to try to understand what the hell you're trying to accomplish.

But once you start playing, and you're all competing for the best gigs in the senate, and you're bribing other players and promising favors and stabbing each other in the back, the goal becomes pretty obvious - reach the top of the food chain in whatever ugly manner makes that possible. And 'food chain' is meant politically, because the top of the real food chain in this game is the fox that makes off with members of the senate almost every turn. There's a significant body count in Chicken Caesar, and every turn you'll be maneuvering and negotiating to keep yourself alive long enough to rule, even if it's just for one turn.

Chicken Caesar is a delightfully social game, one in which the tactics are less important than your ability to coax your opponents into screwing somebody else. You'll maneuver yourself into a position to help out a fellow rooster, then extract a bribe to save his bacon. You'll offer to trade votes - you vote for me, I vote for you - and then you may or may not actually follow through. And even if you do follow through, if you're good, you'll profit a lot more than the guy you help.

And then, if you've got roosters in the right place, you'll kill the bejeezus out of all the others. This part is hilarious fun, because you have to share the chicken-killing power with up to two other people, and they'll have a pretty good idea if you're trying to kill their elected roosters. So you have to play a little nice, throw blame to other players, and ultimately send as many scheming chickens as possible to the belly of the fox.

If you prefer tactical games where you maneuver your troops into position and set up firing solutions, you are not going to love Chicken Caesar. If you like to maximize the efficiency of your gaming engine, this is not the game you want. But if you like to cajole and threaten and promise and betray, then you are definitely going to want to get your hands on this game. It's political fun, better with more players, and the art is fantastic, even if it does feature chickens in Roman robes.

Cons:
Not great if you dislike being mean to other players
Thematically silly

You can only get Chicken Caesar from Game Salute, unless you can find it in stores. You can order it here:
AVE ROOSTER
Posted by Matt Drake at 6:15 PM