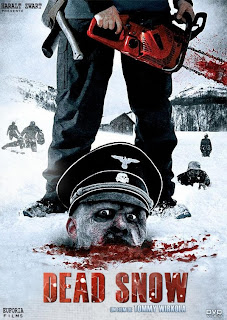 I don't generally have much interest in foreign film, whether it's French arthouse navel-gazing or dubbed Japanese classics. But every now and then, a foreign movie challenges what we expect out of cinema, elevating the art form and raising the bar for filmmaking in general.

Dead Snow is not one of those movies.

Dead Snow is stupid. It should be pretty obvious once I explain the premise - a bunch of med students going to a cabin in the mountains encounter frozen Nazi zombies - but this is a film designed for people who giggle out loud when they see brains fall out of heads. Nazi zombies, as it turns out, are fast and mean and much more dangerous than regular zombies. Mostly because they don't follow any rules, not even the rules set out by the movie itself.

Just so you can get a feel for how stupid this movie really is, here are a few highlights:

- The creepy old man comes to the cabin and tells the kids to be careful, because Nazi zombies are out there. Then he leaves, goes to a deserted part of the mountain, and sets up a tent for the night. Predictably, he is killed by Nazi zombies. Probably because, despite just having told the med students that Nazi zombies made it dangerous to go out at night, he decided to go out at night.

- Sometimes the Nazi zombies are very strong, like when one of them grabs a kid's head, puts its thumbs in the poor boy's eye sockets, and rips the kid's skull in half. That would take some pretty impressive upper-body strength. But other times they are candy-ass Nazi zombies, like when one punches a college kid in the face and barely hurts him at all. Strong enough to pull a skull apart and weak enough to hit like a girl. No wonder they lost whatever battle left them moldering in the snowy mountains of Sweden - they just can't decide whether to be killing machines or ski bunnies.

- The Nazi zombies are killing people from the opening scenes of the film, but at the end, we discover they were just angry because the kids had their gold. Except that the kids did not have their gold when the Nazis started killing them.  Apparently Nazi zombies do not need many excuses to rip heads off college kids.

There are more inconsistencies, plot holes and idiotic moments, but if I tell you about all of them you won't have any reason to see the movie (outside watching a guy rappelling down a mountain using Nazi zombie intestines for rope). If you have a lick of sense, you also don't have a reason to see Dead Snow, but it just might be that you like campy horror movies with ludicrous bloodshed.

If you do enjoy a brainless comedy-horror flick, however, Dead Snow should be on your watchlist. It is intensely idiotic, but it doesn't take itself the least bit seriously, and it contains some rather clever moments. Some of the lines are hilarious, even when you're hearing them in Swedish and reading the translation at the bottom of the screen.

Dead Snow is also a very self-aware movie. The writers know what they are creating, and they want you to know that they know. It follows horror-movie tropes with near-religious fanaticism, acknowledging its roots in dopey slasher flicks. It even has a moment, near the beginning of the film, when the characters are discussing how many stupid horror movies start off with a bunch of kids going up to a remote cabin before they all get horribly murdered. And I love when the one college student, covered in gore and slaying Nazi zombies as fast as he can, screams, 'We should have just gone to the beach like I said!'

I first heard about Dead Snow in a promotional video created by a Swedish pop singer. It was a music video with a perky little blonde who sang a charming tune called, 'My Ass,' in which she extolled the virtues of her shapely backside. Halfway through this nearly pornographic little ditty, the singer pauses while girls carrying large cards reading 'Dead Snow' walk in front of the camera. The song has absolutely nothing to do with Dead Snow, and the promotion was so immensely out of place that I had a very good idea exactly what kind of movie it was. And I was pretty sure it was going to be inane. And I was right.

But it is fun, and the writers know they are making a stupid movie, to the point that they actually bother to reference other stupid movies. Dead Snow is an example of one of those 'so bad it's good' films, the kind you watch with a bunch of other people who are all halfway inebriated and amused by impossible decapitation. Stupid and campy and gory and fun, Dead Snow will entertain even while it lowers your functional IQ.
Posted by Matt Drake at 5:30 PM

No idea what you're saying right now.

I didn't think you would :) I was just nitpicking, and telling you that the movie is from Norway, not Sweden.

Oh hell. Sorry about that. For that matter, Linni Meister is also Norwegian. My fault. Should have done my homework.